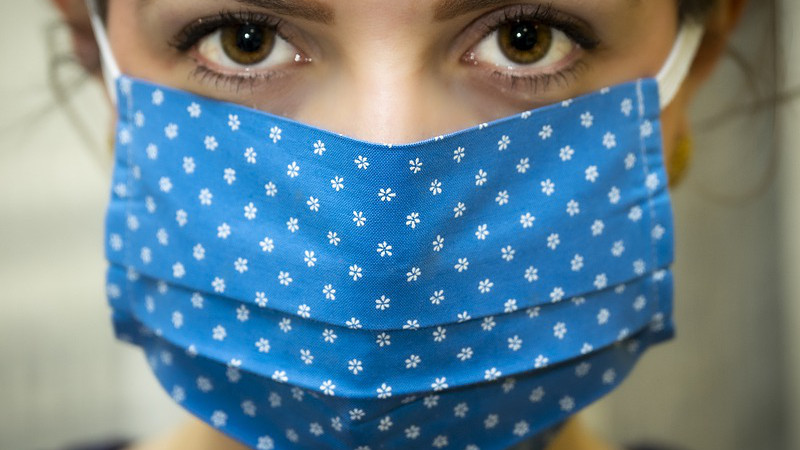 A novel new study suggests that the behavior public officials are now mandating or recommending unequivocally to slow the spread of surging COVID-19–wearing a face covering–should come with a caveat. If not accompanied by proper public education, the practice could lead to more infections.

The finding is part of an unique study, just published in JMIR Public Health and Surveillance, that was conducted by a team of health economists and public health faculty at the University of Vermont’s Larner College of Medicine in partnership with public health officials for the state of Vermont.

The study combines survey data gathered from adults living in northwestern Vermont with test results that showed whether a subset of them had contracted COVID-19, a dual research approach that few COVID studies have employed. By correlating the two data sets, researchers were able to determine what behaviors and circumstances increased respondents’ risk of becoming sick.

The key risk factor driving transmission of the disease, the study found, was the number of daily contacts participants had with other adults and seniors.

That had relevance for two other findings.

Those who wore masks had more of these daily contacts compared with those who didn’t, and a higher proportion contracted the virus as a result.

Basic human psychology could be at work, said Eline van den Broek-Altenburg, an assistant professor and vice chair for Population Health Science in the Department of Radiology at the Larner College of Medicine and the study’s principal investigator.

“When you wear a mask, you may have a deceptive sense of being protected and have more interactions with other people,” she said.

The public health implications are clear. “Messaging that people need to wear a mask is essential, but insufficient,” she said. “It should go hand in hand with education that masks don’t give you a free pass to see as many people as you want. You still need to strictly limit your contacts.”

The study also found that participants’ living environment determined how many contacts they had and affected their probability of becoming infected. A higher proportion of those living in apartments were infected with the virus compared with those who lived in single family homes.

“If you live in an apartment, you’re going to see more people on a daily basis than if you live in a single family home, so you need to be as vigilant about social distancing,” van den Broek-Altenburg said.

The study controlled for profession to prevent essential workers, who by definition have more contacts and are usually required to wear masks, from skewing the results.

“It’s generally known that essential workers are at higher risk, and our study bore that out,” van den Broek-Altenburg said. “We wanted to see what else predicted that people were going to get sick,” she said.

The study provides the first estimate of unreported cases in Vermont’s Chittenden County, where most study participants live. The survey found that 2.2 percent of the survey group had contracted the virus, suggesting that an estimated 3,621 Chittenden County residents were likely to have become ill, compared with just 662 reported cases, just 18%.

That figure translates to a hospitalization rate of 1.2% and adjusted infection fatality rate of 0.55%.

This finding is important for policy-makers, van den Broek-Altenburg said, in and out of Vermont.

“If you know how many people are sick or have been sick, you’re much better equipped to make precise predictions of will happen in the future and fashion the appropriate policies,” she said.

It also shows the importance of serologic and PCR testing of the general population, she said.

“If you only test symptomatic patients, you’ll never be able to find out how many people have already had the virus. With our random sample study we were able to show that Vermont has so far only tested less than one-fifth of the people who have likely had the virus. To capture the larger population, random samples of the population are needed so we can also capture asymptomatic patients, which appears to be the majority of COVID-19 cases.”

The study, among other things, is a proof of concept, van den Broek-Altenburg said.

“I hope it leads to other, larger studies that combine survey data with widespread testing. This approach is essential to both understanding the dynamics of this pandemic and planning our response to futures ones.”

Ten of the 454 survey respondents who took the serologic test had antibodies for Covid-19, and one tested positive for the virus. Given the small number, researchers simplified their models and were able to reach a high confidence level in the two key findings.

“We tested our models and found that the results were robust through several different model specifications,” van den Broek-Altenburg said.

To create the study group, the researchers sent a survey to 12,000 randomly selected people between the ages 18 and 70 who had at least one primary care visit at the University of Vermont Medical Center, which services primarily northwestern Vermont, in the past three years.