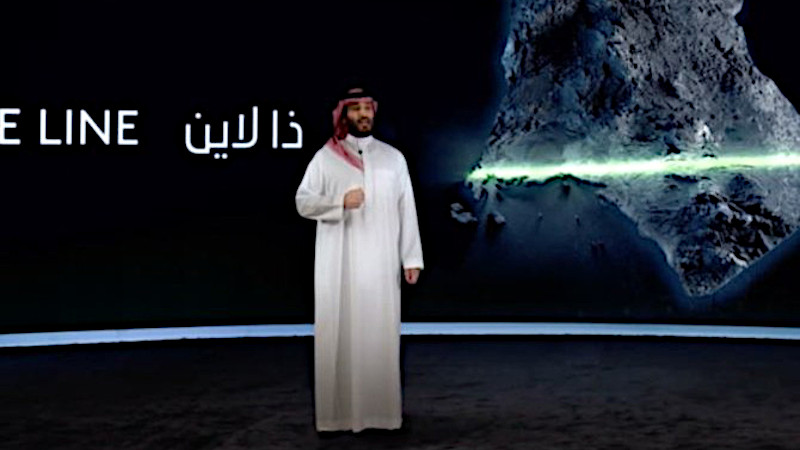 Saudi Arabia’s newly unveiled The Line project has been three years in the making, from design and concept to announcement. It will serve multiple purposes, but the most important is in terms of its role in the Kingdom’s future hopes and vision.

The Line, construction of which is to begin by March, will rewrite the concept of the city. The coronavirus disease’s (COVID-19) impact on global societies is bringing to the fore new ideas about how to use space in a healthier way. Usually, cities are laid out concentrically or in grids, but The Line goes from point A on NEOM’s Red Sea coast to point B in the interior.

The project was announced this week by Crown Prince Mohammed bin Salman, who said The Line will benefit from $500 billion in support from the Saudi Public Investment Fund, which owns NEOM, and local and global investors over the next 10 years. He said that the project is expected to add $48 billion to the Kingdom’s gross domestic product and will create 380,000 jobs.

NEOM, in northwest Saudi Arabia, is a 26,500 square km high-tech development with several zones, including industrial and logistics areas, planned for completion in 2025. The Line itself is billed as a project that will accelerate human progress by reconceptualizing the use of space in a city, augmented by the use of technologies such as biometrics. The Line will serve as a model for other similar concepts around the world once it bears actionable results.

Linear cities are not a new idea, but now that COVID-19 is ravaging the planet and will continue to challenge countries for several years to come, the time for such projects is now. The ideas surrounding The Line are experimental, but the concept of its use of space provides a unique way of examining urban layout in conjunction with modern technology.

This is the first time in two centuries that a major urban development has been designed around people, not roads. The idea is that all essential daily services, such as schools, medical clinics and leisure facilities, as well as green spaces, will be within a five-minute walk for everybody. Urban living will become more about time, health and business thanks to this linear design.

As previously announced by the Saudi government, NEOM is to be home and workplace to more than a million residents from around the world. It will include towns and cities, ports and enterprise zones, research centers, sports and entertainment venues, and tourist destinations. As a hub for innovation, entrepreneurs, business leaders and companies will come to research, incubate and commercialize new technologies and enterprises in groundbreaking ways. The inland water access, which will go all the way to the end of The Line, illustrates the efficiency of its use of space from sea to desert in a spoke-like nature. This futuristic concept will help restructure the use of space in a high-tech, climate-sensitive manner.

The idea of NEOM and The Line functioning within an ethos and embracing a culture of exploration, risk-taking and diversity is related to the ideas of free trade zone regulations. The Line, alongside NEOM itself, is about progressive laws that are compatible with international norms and are conducive to economic growth in the post-COVID-19 era. The status of The Line in terms of regulatory law will help to create new opportunities for entrepreneurship.

NEOM is to become a hub of renewable energy generation, as well as a development ground for smart technologies that will facilitate the transition to a low-carbon energy system. Last year, NEOM announced plans for the world’s largest green hydrogen plant: A $5 billion venture that is expected to produce 650 tons of the fuel per day by 2025, making the Kingdom a world leader in the field.

Overall, The Line is unique. The idea of a linear city will help humankind as it adjusts to co-existence with the COVID-19 pathogen, while also coping with the need to address climate change and the very way that we live our lives. It is time for a change, as demonstrated by how the COVID-19 pandemic hotwired the Fourth Industrial Revolution (4IR). The Line is a byproduct of the requirements of the 4IR and its global impact.