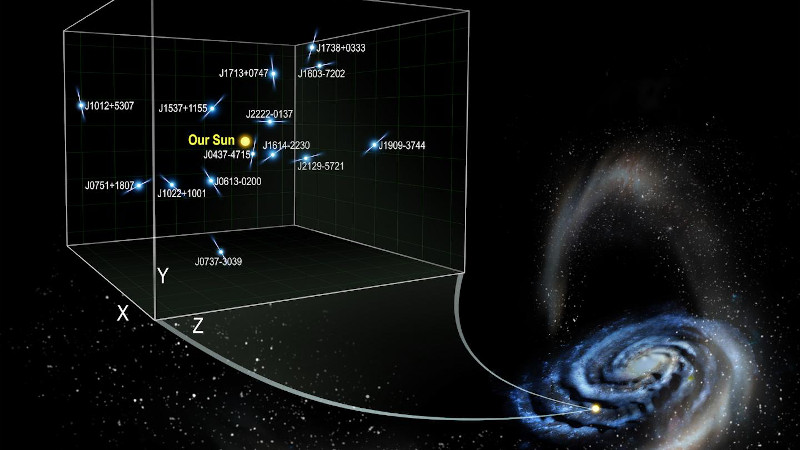 It is well known that the expansion of the universe is accelerating due to a mysterious dark energy. Within galaxies, stars also experience an acceleration, though this is due to some combination of dark matter and the stellar density.

In a new study to be published in Astrophysical Journal Letters researchers have now obtained the first direct measurement of the average acceleration taking place within our home galaxy, the Milky Way. Led by Sukanya Chakrabarti at the Institute for Advanced Study with collaborators from Rochester Institute of Technology, University of Rochester, and University of Wisconsin-Milwaukee, the team used pulsar data to clock the radial and vertical accelerations of stars within and outside of the galactic plane. Based on these new high-precision measurements and the known amount of visible matter in the galaxy, researchers were then able to calculate the Milky Way’s dark matter density without making the usual assumption that the galaxy is in a steady-state.

“Our analysis not only gives us the first measurement of the tiny accelerations experienced by stars in the galaxy, but also opens up the possibility of extending this work to understand the nature of dark matter, and ultimately dark energy on larger scales,” stated Chakrabarti, the paper’s lead author and a current Member and IBM Einstein Fellow at the Institute for Advanced Study.

Stars hurtle through the galaxy at hundreds of kilometers per second, yet this study indicates that the change in their velocities is occurring at a literal snail’s pace–a few centimeters per second, which is about the same speed as a crawling baby. To detect this subtle motion the research team relied on the ultraprecise time-keeping ability of pulsars that are widely distributed throughout the galactic plane and halo–a diffuse spherical region that surrounds the galaxy.

“By exploiting the unique properties of pulsars, we were able to measure very small accelerations in the Galaxy. Our work opens a new window in galactic dynamics,” said co-author Philip Chang of the University of Wisconsin-Milwaukee.

Extending outwards approximately 300,000 light years from the galactic center, the halo may provide important hints to understanding dark matter, which accounts for about 90 percent of the galaxy’s mass and is highly concentrated above and below the star-dense galactic plane. Stellar motion in this particular region–a primary focus of this study–can be influenced by dark matter. Utilizing the local density measurements obtained through this study, researchers will now have a better idea of how and where to look for dark matter.

While previous studies assumed a state of galactic equilibrium to calculate average mass density, this research is based on the natural, non-equilibrium state of the galaxy. One might analogize this to the difference between the surface of a pond before and after a stone is tossed in. By accounting for the “ripples” the team was able to obtain a more accurate picture of reality. Though in this case, rather than stones, the Milky Way is influenced by a turbulent history of galactic mergers and continues to be perturbed by external dwarf galaxies like the Small and Large Magellanic Clouds. As a result, stars do not have flat orbits and tend to follow a path similar to that of a warped vinyl record, crossing above and below the galactic plane. One of the key factors that enabled this direct observational approach was the use of pulsar data compiled from international collaborations, including NANOGrav (North American Nanohertz Observatory for Gravitational Waves) that has obtained data from the Green Bank and Arecibo telescopes.

“For centuries astronomers have measured the positions and speeds of stars, but these provide only a snapshot of the complex dynamical behavior of the Milky Way galaxy,” stated Scott Tremaine, Professor Emeritus at the Institute for Advanced Study. “The accelerations measured by Chakrabarti and her collaborators are directly caused by the gravitational forces from the matter in the galaxy, both visible and dark, and thereby provide a new and promising window on the distribution and the composition of the matter in the galaxy and the universe.”

This particular paper will enable a wide variety of future studies. Accurate measurements of accelerations will also soon be possible using the complementary radial velocity method that Chakrabarti developed earlier this year, which measures the change in the velocity of stars with high precision. This work will also enable more detailed simulations of the Milky Way, improve constraints on general relativity, and provide clues in the search for dark matter. Extensions of this method may ultimately allow us to directly measure the cosmic acceleration as well.

While a direct picture of our home galaxy–similar to the ones of Earth taken by the Apollo astronauts–is not yet possible, this study has provided essential new details to help envision the dynamic organization of the galaxy from within.