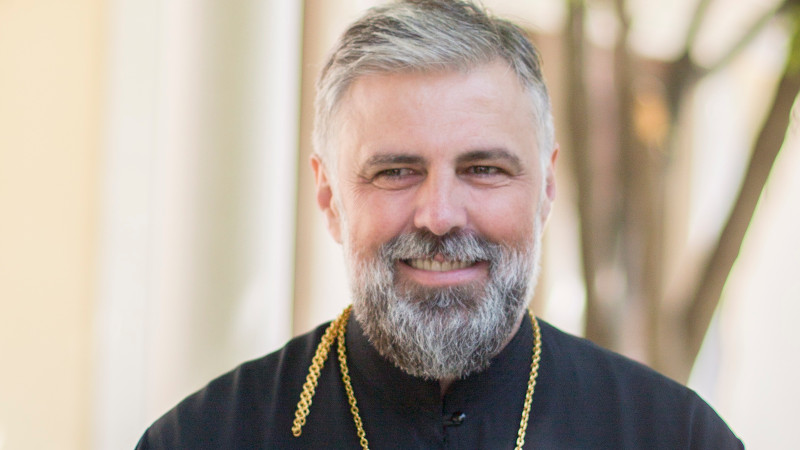 On January 7, when Orthodox Christians mark Christmas, a Serbian Orthodox bishop in Germany gave an interview to Balkan news outlet NewsMax Adria. His remarks, however, were more political than religious.

Bishop Grigorije, the 52 year-old head of the Serbian Orthodox diocese of Dusseldorf and all Germany, has waded into politics before, criticising the way Serbia is being run by President Aleksandar Vucic and his Progressive Party.

But in the Christmas interview he went a step further, announcing a “plan” that set tongues wagging back home.

“My plan is to gather as many young people as possible, who are educated, honest, smart and brave and who want to come to Serbia, if they’re not already there, and, if they are, to sacrifice themselves, to build above all a legal system,” the bishop said.

“There is no man who can be saviour,” he said, in apparent reference to Vucic. “It is necessary to create a system so we’re not looking for a saviour every time.”

A modern, moderate figure within the Serbian Orthodox Church hierarchy, Grigorije has largely avoided being pigeon-holed as ‘pro-European’ or ‘nationalist’, the traditional ideological divide in Serbia. Though he has previously dismissed the idea of being a political leader, many in Serbia’s beleaguered opposition see him as potentially just that, a saviour of their election hopes in 2022.

Criticism of the bishop by pro-government tabloids and government officials, including Prime Minister Ana Brnabic, suggest the Progressives are unnerved, possibly fearing a repeat of what went on last year in neighbouring Montenegro when a damaging confrontation between the then head of the Serbian Orthodox Church and the Democratic Party of Socialists was widely seen as sealing the party’s defeat in an August election after three decades of uninterrupted rule.

“Considering that the Serbian Orthodox Church, in addition to the army, is an institution in which the citizens continuously have great trust, there is a real danger that the bishop will exert more influence than any of the opposition politicians because he comes from such an institution,” said sociologist Vuk Vukovic, an editor of the Serbian edition of Le Monde Diplomatique.

“The opposition recognises that in the absence of new methods of fighting against the ruling party and lack of ‘new faces’, it will succeed in applying the ‘Montenegrin method’ in which clergy give new legitimacy and enthusiasm to old opposition policies and formations and transcend party divisions,” Vukovic told BIRN.

Mladen Djuric, who would later take on the name Grigorije, was born in 1963 in the central Bosnian town of Vares, then part of socialist Yugoslavia.

He became an orthodox priest in 1992, but besides the Holy Spirit Grigorije followed the spirit of rebellion, taking part in student protests only months earlier against Serbia’s then nationalist strongman Slobodan Milosevic.

“I am not ashamed that I was a part of that, but also I am not so proud when I see the final results,” Grigorije recalled in a 2017 interview with the N1 regional broadcaster. “I am coming to the conclusion that it would be much better if everyone had heard what those young people were saying at that time.”

War broke out in Bosnia in 1992 as Yugoslavia fell apart. Grigorije was stationed by the Church in the southern Bosnian city of Trebinje, controlled by Bosnian Serb forces during the war.

He was made Bishop of Zahumlje and Herzegovina in 1999, a position he held until May 2018 when the Holy Synod appointed him to lead the Serbian Orthodox Church in Germany. The move was seen by some church observers as punishment for Grigorije’s criticism of Serbia’s ruling party and president, a way to banish him from the region.

Eyebrows were raised when, during a 2013 visit to Trebinje by Dodik, Grigorije, in a response to a journalist’s question, said – with a smile – that it would be better if “merciful” St. Basil passed judgment since if it was left up to him the journalist would be “knocked out”.

Nevertheless, Grigorije is firmly among the moderates in the Serbian Orthodox Church, known for his advocacy of unity among the world’s Christian Churches.

“Dialogue and good relations between the Christian churches could significantly contribute to reconciliation and the stabilisation of relations in the Balkans,” he said in 2015.

He is also a ‘centrist’ when it comes to the question of Kosovo, at least within a Church that has long fiercely opposed independence for the former Serbian province regarded by many Serbs as the cradle of their nation and faith.

While rejecting the notion that Kosovo, which declared independence in 2008 and has been recognised by more than 100 states around the world, is no longer part of Serbia, Grigorije said in his Christmas interview it did not mean he believes ethnic Albanians – the overwhelming majority – cannot live there or that Kosovo “cannot be theirs as well.”

Some of Grigorije’s comments have irritated the Church.

In July last year, the bishop took issue with the money spent by the state completing the Temple of Saint Sava in Belgrade, arguing that while Serbia has many churches its schools and hospitals are often “neglected.”

The office of Patriarch Irinej, who died in November, said Grigorije’s statement was “unfortunate” and echoed “anti-Serbian and anti-Church circles in Serbia”.

But Mladen Aleksic, a Serbian theologian and teacher of religion, said Grigorije was an exceptional orator.

The bishop, he told BIRN, “has an ear for the younger generations, great intellectual potential” and is an advocate of “dialogue and reconciliation.”

“I see him as close to those who want to bring the Church closer to the faithful and who will keep up with the modern world.”

When Irinej died after contracting COVID-19, Grigorije’s name was mentioned among possible candidates for patriarch.

Pro-government tabloids in Serbia say he has an eye on the Church’s top job, or even that of Serbian president.

Grigorije told Newsmax Adria that “neither the president nor the patriarch will be elected by the tabloids, but by the serious Serbian people.”

But his plan to gather those willing to “sacrifice” themselves for Serbia caused a storm inside the government.

Interior Minister Aleksandar Vulin called on him to remove his bishop’s robes if he planned to enter politics, while Infrastructure Minister Toma Momirovic said Grigorije had used Orthodox Christmas for “the most shameless personal marketing, the announcement of the formation of a party and possible candidacy for nothing less than the presidency of Serbia.”

Vucic himself said in March last year that he was unbothered by Grigorije’s criticism of his rule, but that he should give up his religious role. Asked again about the bishop in December, the president said he had no interest in his remarks.

Grigorije “found himself targeted by the authorities because he was critical of the current political structure in his statements,” said Aleksic, the theologian. “Personally, I think he likes public appearances, which is not a bad thing.”

“He is what we really miss today, in these difficult times for the Church and the people. Although he looks a bit like a politician, Bishop Grigorije puts his clerical responsibilities first.”