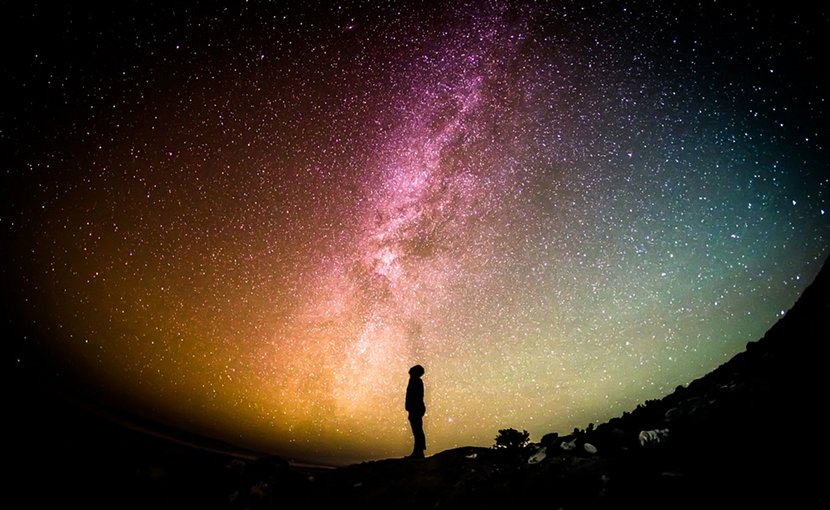 This week, scientists discovered an FM radio signal emitting from Ganymede, a moon of Jupiter. No, it’s not aliens blasting some Kanye, NASA said, it is a naturally occurring phenomenon.

But what if scientists someday do discover intelligent extraterrestrials? What would that mean for humans? How would these beings relate to God, and in turn, how would humanity be called to relate to them? Or what if man-made AI started thinking for itself?

These are the kinds of questions that Society of Catholic Scientists will address at their conference in June.

“It’s a very hot subject scientifically now, because scientists have begun to discover large numbers of planets orbiting other stars. They’re called exoplanets…and many of them are habitable in theory,” Stephen Barr, president and co-founder of the Society of Catholic Scientists, told CNA.

“And it’s only going to become a bigger subject scientifically as more and more planets are discovered, and as scientists think of ways to investigate them,” he said.

Barr is professor emeritus in the department of Physics and Astronomy at the University of Delaware and former director of its Bartol Research Institute.

He and some fellow Catholic scientists founded the SCS in 2016 with a desire to foster community among Catholic scientists, and to be a resource for Catholic science students and teachers. They also wanted to dispel the myth that Catholicism and science are somehow opposed. “People think that the world of science is completely atheistic, because up until now, atheist scientists have been much more outspoken,” Barr said. “We wanted…to make people aware that there are a lot of religious scientists out there, including a lot of believing Catholics.”

The SCS conference in June will address the topics of extraterrestrial as well as artificial intelligences from all kinds of scientific and theological angles, Barr said, such as whether aliens could have rational souls.

“It’s because we (humans) are free and rational that we are capable of love, and that we are spiritual. And so any being elsewhere in the universe to be a spiritual being…that requires a spiritual soul that is a gift from God. That’s why the Church teaches that every human being, from the first human beings, to every child that’s born or conceived, receives directly from God, – not simply just through the physics and chemistry, the biology of reproduction, but God – must act in a special way to confer a spiritual nature on a being,” Barr said.

The possibility of embodied spiritual beings who are not humans raises a host of additional questions, Barr added. “If there are rational beings elsewhere in the universe… would they be fallen? Would they need salvation?” he said.

Jonathan Lunine is the vice president of SCS and the David C. Duncan professor in the physical sciences of Cornell University and director of the Cornell Center for Astrophysics and Planetary Science. Lunine will be speaking at the SCS June conference about extraterrestrials from an astrophysical perspective.

Lunine said that in the past 25 years, at least three moons in the outer solar system have been discovered to have oceans of liquid under their surfaces. “In the case of one of those, which is underneath the ice of Saturn’s moon Enceladus, that material is actually leaking out into space, it’s spewing out into space in form of water vapor and ice and dust,” he said.

“So we know that that ocean is salty. We know how salty it is. We know it has carbon-bearing molecules. Of course, carbon is the scaffolding of life.”

While microbial life, or any kind of life for that matter, has yet to be discovered in space, Lunine said it would be an “incredible discovery because it would tell us that in just one planetary system, our own in our galaxy, which contains 200 billion stars and probably as many planets, that the universe could be teaming with microbial life.”

As a Catholic, Lunine said the discovery of even microbial life would say something about the nature of God: “that we should not expect that life should have only begun on this planet, in the very same way that we should not expect that the only species of plants and animals that we see today on the earth are all there ever was over 4 billion years of the Earth’s history,” he said.

“Many theologians have pointed out that these wonderful creatures that we see in the fossil records that have evolved through time – that’s part of the super abundance of God’s creation. The same would be true for microbial life elsewhere in the universe.” Lunine said while the search for life is a “bona fide scientific goal,” he would leave most of the theological discussions up to the theologians.

As a practicing Catholic and scientist, Lunine said he hoped students of faith who were studying the sciences would look to SCS and famous scientists of faith to see that faith and science are not in conflict.

“I think many of us who are scientists, who have faith as well, feel that our faith gives us a deeper sense of appreciation for what it is that we’re discovering about the universe or about biology or whatever we’re studying in sciences,” he said.

Karin Öberg is an associate professor in the department of astronomy of Harvard University, and a convert to Catholicism. At the June conference, Öberg will be addressing the question of extraterrestrial intelligence from the perspective of astrochemistry.

Oberg said one of the most interesting questions raised by the possibility of intelligent life outside of Earth is “if they exist, how that could possibly be reconciled with our salvation through the incarnation? And their possible salvation?”

It is something that the Church has not answered definitively, in part because intelligent extraterrestrials have yet to be discovered, if they exist at all. But Oberg said she and many scientists have an intuition that life does exist outside of the earth, at least in some form.

“I think if you polled scientists, the vast majority would say that they think it’s very likely that life exists elsewhere in the universe and perhaps quite abundantly,” she said.

For Oberg, membership in CSC has provided her with fellowship with other Catholic scientists. It also inspires her “to be a witness to younger Catholics, especially to Catholic students, to show by our lived lives that the faith and science exist quite harmoniously in both our private and professional lives, and that they don’t have to choose.”

She said she often wears a cross in class as part of that witness, to let other students of faith know that they belong in the sciences.

“I was a scientist before I was a Christian or a Catholic,” she said. “So I converted when I was in my late 20s, so after I’d gotten my PhD. I’ve never personally experienced any sense of conflict (between faith and science).”

Oberg said this idea of a faith-science conflict is really a “myth” born out of misunderstanding.

Christopher Baglow is the director of the Science and Religion Initiative of the McGrath Institute for Church Life of the University of Notre Dame. He serves as a theologian and liaison for the SCS, and will be speaking at the June conference about the theological questions raised by the possibility of extraterrestrial life.

“What’s exciting to me (about SCS) is that here you have scientists beginning to think seriously about an important truth that animates our faith. And that’s great for them obviously as persons, but also as representatives of the faith in academia,” he said.

Besides the questions about incarnational salvation, Baglow said other interesting questions arise when considering what solidarity with extraterrestrial beings would look like.

Furthermore, he asked, if they are spiritual beings worshipping the triune God, how might their liturgies differ from those here on earth?

While there are a lot of interesting questions surrounding the possibility of extraterrestrial intelligent beings, Baglow said that Christians can have serenity in the face of these questions.

“We do not need to be disturbed that we’re even asking them, because no matter what new truths we discovered through the use of reason or the use of technology, the truths of the faith will always be greater than them, and able to encompass them in some kind of harmony,” he said.

“One theologian might argue, ‘Well, I think there would be one salvific death for all species.’ Another might argue, like I do: ‘For every fallen species, the Son of God would enter into their actual condition.’”

“As long as we are all affirming the same principles, we can come to a number of different conclusions and have great arguments about it,” he said.

When it comes to artificial intelligences, Baglow said that while those also pose some interesting questions, it is unlikely that the Church would ever say that they have been given souls by God.

“I think that in the case of any AI, you would always have a situation where whatever has the appearance of reason and will would ultimately simply be an extension of the program or of programmers,” he said. “Even in those programs that can learn algorithms…they’re always learning within a certain parameter in which that learning is totally conditioned by the programmers that made it.”

The SCS 20201 conference will be held June 4-6 in Washington, D.C., and interested participants can find registration information on the SCS website.

Barr said he hoped more Catholic scientists would become involved in the society. He also encouraged other Catholics to make use of the resources available on the SCS website, such as biographies of Catholic scientists throughout history, or articles and videos about various topics and commonly asked questions about science and faith.

“One of our four missions is to be a resource for the public on science-based questions, for apologetics and catechetical and evangelization purposes. We want to be available to answer people’s questions. We’re not just for ourselves,” he said.

The article Aliens And AI: Catholic Society Looks At Science Questions From A Faith Perspective appeared first on Eurasia Review.