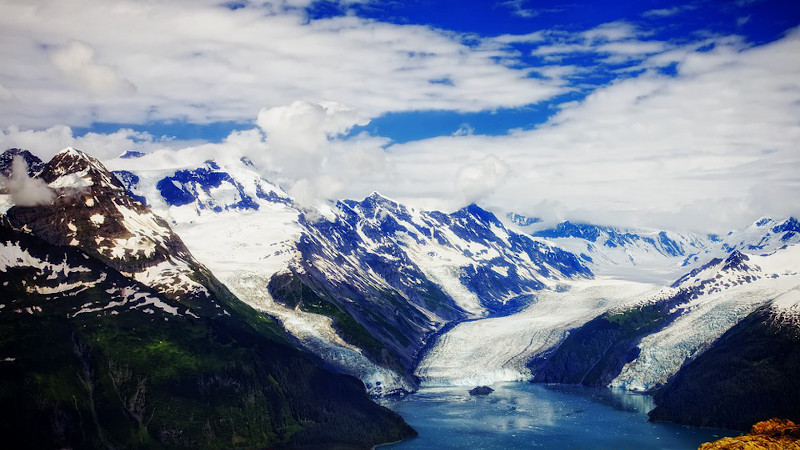 A glacier that had held an Alaskan slope in place for centuries is melting, releasing the soil beneath in what can be described as a slow-motion landslide, researchers say. But there’s also the possibility of a real landslide that could cause a devastating tsunami.

In a study published last week, scientists noted that the slope on Barry Arm fjord on Prince William Sound in southeastern Alaska slid some 120 meters from 2010 to 2017. These are some of the first measurements to quantify how the slope is falling there.

“We are measuring this loss of land before the tsunami occurs,” said Chunli Dai, lead author of the paper and a research scientist at The Ohio State University’s Byrd Polar and Climate Research Center.

The study was published in Geophysical Research Letters.

Landslides on slopes near glaciers generally occur when glacial ice melts, a phenomenon occurring more rapidly around the world because of climate change. Landslides can prompt tsunamis by sending massive amounts of dirt and rocks into nearby bodies of water. Such a landslide happened in 2017 in western Greenland, prompting a tsunami that killed four people.

Scientists estimate that a landslide at Barry Arm fjord could be about eight times larger than that Greenland landslide.

If the entire slope collapsed at once, the researchers found, tsunami waves could reach communities throughout the sound, which are home to hundreds of people and visitors, including fishermen, tourists and members of an indigenous Alaskan group called the Chugach.

For this study, researchers used satellite data to measure and monitor the size of the glacier that had covered the Barry Arm slope, and to measure the amount of land that had already been displaced, which is found to be directly linked to Barry Arm glacier’s melting. Then, they built models to identify the potential landslide risk.

The data showed that, from 1954 to 2006, Barry Glacier thinned by less than a meter per year. But after 2006, the melt rapidly increased, so that the glacier was thinning by about 40 meters per year. The glacier retreated rapidly from 2010 to 2017, the researchers found. The land’s “toe” — the bottom point of the falling slope — had butted against the glacier in 2010. By 2017, that toe was exposed, and butted up against the water in Prince William Sound.

The researchers modeled potential tsunami scenarios, and found that, if the land along that slope collapsed at once, the resulting tsunami would send currents between 25 and 40 meters per second — enough to cause significant damage to large cruise and cargo ships and fishing boats, as well as overwhelming kayakers, all of which frequent Prince William Sound.

Waves could reach 10 meters in the nearby town of Whittier. The tsunami could disrupt fiber optic service to parts of Alaska, the researchers noted — two of the five submarine fiber optic lines to Alaska run below Prince William Sound. And oil from the 1989 Exxon Valdez oil spill still lingers in sediment in Prince William Sound, meaning it is possible that a tsunami could send that oil back into the environment.

“If the slope fails at once, it would be catastrophic,” said Dr. Bretwood Higman, a geologist with Ground Truth Alaska and co-author of the study.

“People are working on early-detection warnings, so if a landslide happens, people in nearby communities might at least get a warning,” said Anna Liljedahl, an Alaska-based hydrologist with Woodwell Climate Research Center, and another co-author. “This kind of research might help with building those early-warning systems.”