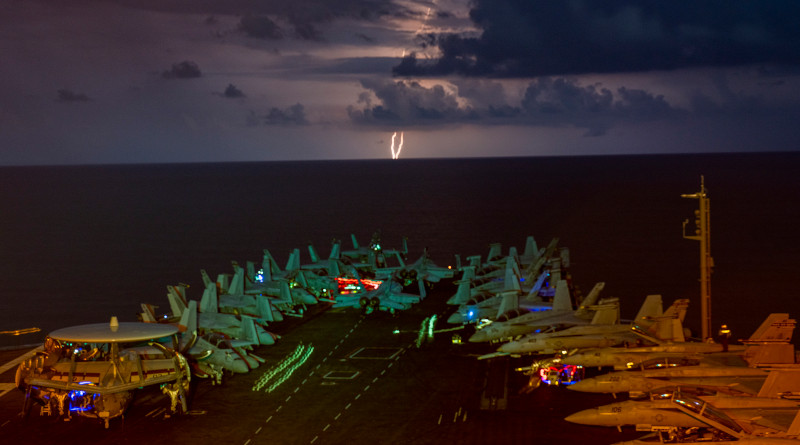 Key developments in the South China Sea in 2020 were shaped by the impact of the COVID-19 pandemic, international lawfare, and maritime security.

Second, the crew of the USS Theodore Roosevelt contracted COVID-19 after visiting Vietnam in early March. The nuclear-powered carrier was put out of operation for two months. While Chinese propaganda made a meal out of this mishap, the United States countered by charging China with taking advantage of the coronavirus pandemic to bully and intimidate claimant states.

A major development with regard to international lawfare was that China established two new administrative districts in the South China Sea on 18 April — one for the Paracel Islands and Macclesfield Bank, the other for the Spratly Islands. Both districts came under the jurisdiction of Sansha City on Woody Island. The establishment of these administrative districts prompted protests by Vietnam and the Philippines.

But no lawfare development was more significant than the cascade of notes verbales submitted to the United Nations Commission on the Limits to the Continental Shelf (CLCS) or UN Secretary General in response to Malaysia’s preliminary submission for an extended continental shelf on 12 December 2019. Malaysia’s note verbale rejected the legal basis of China’s claims to historical rights. China responded by requesting the CLCS outright dismiss Malaysia’s claim.

Three themes emerged from these diplomatic exchanges — an outright rejection of China’s claims to historic rights, support for claims to maritime zones solely based on the United Nations Convention on the Law of the Sea (UNCLOS), and support for the Award by the Arbitral Tribunal that heard the claims brought by the Philippines against China. Addressing the UN General Assembly on 22 September, Philippines President Rodrigo Duterte said ‘the Award is now part of international law, beyond compromise’.

Maritime security in the South China Sea was affected by maritime law enforcement vessels and a series of naval exercises by China and the United States. The China Coast Guard entered Malaysia’s Exclusive Economic Zone to harass an oil drill ship operating under contract with Petronas, the Malaysian state-owned oil company, between late January and February 2020.

2020 was also marked by two incidents instigated by Chinese warships, Washington’s continued naval presence and freedom of navigation operations (FONOPS), a change in US bomber presence based in Guam, as well as unprecedented naval exercises by China and the United States. The Trump administration raised the annual number of FONOPS conducted by the US navy, most notably conducting two back-to-back FONOPS in late April.

In April–May, China sought to capitalise on USS Theodore Roosevelt’s COVID-19 incapacitation by dispatching the Liaoning Carrier Task Group to the northern South China Sea to conduct flight operations and a series of combat exercises. Washington responded some months later with its strongest assertion of naval power in the South China Sea since 2014 by dispatching three Carrier Strike Groups.

China responded to the presence of US aircraft carriers by dispatching four fighter jets and four bombers to Woody Island in the Paracels in early July. Beijing then conducted a series of naval exercises that coincided with the annual Rim of the Pacific (RIMPAC) exercise off Hawaii from 17–31 August.

Looking forward, tensions in the South China Sea are unlikely to subside as China and the United States continue their action–reaction cycle of military exercises. China will harass any renewal of oil exploration by claimant states in waters that it claims. China will step up pressure on ASEAN members to complete the Code of Conduct in 2021. The Biden administration will re-engage with ASEAN and offer counter-balance to China.

*About the author: Carlyle A Thayer is Emeritus Professor at the Australian Defence Force Academy, University of New South Wales, Canberra.

Source: This article was published by East Asia Forum. This article is part of an EAF special feature series on 2020 in review and the year ahead.