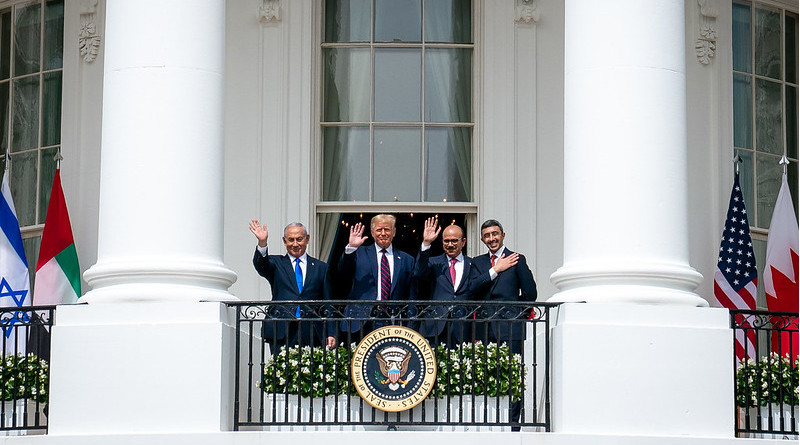 The recent normalization of relations between Israel and two Gulf Cooperation Council (GCC) countries, the UAE and Bahrain, could well prepare the ground for a resolution of the Palestinian-Israeli conflict. This was among the key observations of experts who took part in a panel discussion as part of the three-day Abu Dhabi Strategic Debate.

Sprinkled with references to strategic “recalculations” and “game changers,” Tuesday’s session, titled “The Gulf: Recalculations,” was one of the highlights of the seventh Abu Dhabi Strategic Debate, organized by the UAE’s Emirates Policy Center.

“The geopolitical map of power distribution in the Middle East has been changing,” said Abdulla bin Ahmed Al-Khalifa, chairman of the Bahrain Center for Strategic, International and Energy Studies (Derasat).

“If we look at the past two decades, we find that some countries previously played a central role but, for reasons of civil war, insecurity or economic stagnation, no longer do so. If we look at the Gulf in particular, we find that having quickly become a front runner, it is leading the region in terms of peace, economic development and political and regional affairs.”

Al-Khalifa said that GGC states, compared with the rest of the region, have successfully preserved their domestic security, continued to focus on positive economic development, provided necessary and advanced services to its people and residents and attracted great minds from all around the world.

“There are very positive indicators that show that the Gulf is in a better-off position,” he said. “Forecasts indicate that were the Gulf to continue on such a positive economic development trajectory to 2030, it would be the sixth biggest economic bloc in the world, and this says a lot.”

To put the GCC’s achievements in perspective, Al-Khalifa cited a UN High Commissioner for Refugees estimate that placed the number of refugees leaving their hometowns — mainly from the Middle East toward Europe —at 225,000 in 2014. A year later, that number quadrupled to just above one million, before starting to gradually decrease.

“What happened during 2015 alone was the continuous channeling of funds toward areas of tension and the financing of terrorist and extremist organizations in parts of the Middle East,” he said. “This caused more instability, which undermined the security of many different countries in the region and which has led to more refugees fleeing toward Europe.”

Al-Khalifa took note of the (maximum) “economic pressure” brought to bear on Iran by the Trump administration and the labeling of the Islamic Revolutionary Guard Corps as a terrorist organization last year but cautioned that no decisive action has been taken. “Many are of the notion that the current Iranian regime is betting on a new US administration,” he said. “And we are still to see the final results of the US elections, which are yet to be reflected in developments in the Middle East.”

For his part, Albadr Alshateri, former politics professor at the National Defense College in Abu Dhabi, described the advent of the Abraham Accords — signed by Israel, the UAE and Bahrain — as one of necessity, owing to the geopolitical competition that is so “pervasive” in the region. He said the treaty’s three signatories all regard Iran as a common threat, adding that they have come together because of the gradual “erosion” of the Arab state system, which has been on the decline, particularly since 1990 and the invasion of Kuwait.

“The Arab state system was a structure that shaped the foreign policies of different Arab states and provided leadership in the face of external threats and challenges,” he said. “Since that decline or erosion, core Arab states are now basically in chaos or are failed states, like Syria and perhaps Iraq. Egypt is also maybe too busy with itself to play the big role it used to in the regional system.”

From a global standpoint, Alshateri said that “a center of gravity” was lacking, as Washington’s declining role in the region will not allow it to play its traditional role of maintaining political order therein. He expressed cautious optimism by calling on the need to see results of the normalization of relations between Bahrain, the UAE and Israel leading to more countries joining the peace process.

“I personally advocate for something like a Westphalia peace treaty for the whole region where all countries, regardless of their ethnic composition or beliefs, can coexist in peace and harmony,” Alshateri said.

“If they cannot exist in harmony, at least they can exist within secure borders. If the new Abraham Accords can create such an environment or transformation, then we can talk about game changers. What impact the normalization of relations will have in the future is something to be tested.”

In conclusion, Alshateri called for the Palestinian-Israeli conflict to be resolved, adding that it is the core issue between Arabs and Israelis. “Solving this problem will push us forward to a more stable and secure region,” he said. “Absence of that will make it harder. There will be great resentment publicly.”

Participating in the same panel discussion, Amos Yadlin, a retired major-general in the Israel Defense Forces and executive director of Tel Aviv University’s Institute for National Security Studies, chalked up the Israel-UAE-Bahrain normalization process to a convergence of interests and values, including modernization, moderation, stability and peace.

“The potential of a game changer is to show the public in the Middle East, which is suffering from civil wars in Syria, Libya and Iraq, the negative influence of Turkey and Iran and to show that there is another way of having better relations that will trickle down to everyone, not only among leaders,” Yadlin said.

“The potential is also there to move forward on the Palestinian-Israeli issue. The UAE stopped the annexation, and the Palestinians can come back to negotiate. It’s going to be even easier with the new US administration. The Gulf has figured out that it can use the peace accords to promote negotiations between Israelis and Palestinians.”

Another strategic potential cited by Yadlin was more cooperation among Gulf states, Israel and the US to cope with “Iranian terror activity” and proxies of Iran, which he said were destabilizing the Middle East.

“We can cooperate here,” he said. “We are not looking for war, nor clashes. But the very fact that Iran will know we are sharing intelligence and we are together to cope with the challenges is another opportunity for a game changer in the Middle East. If trust is built among the leaders and the people, we can all see a better Middle East.”