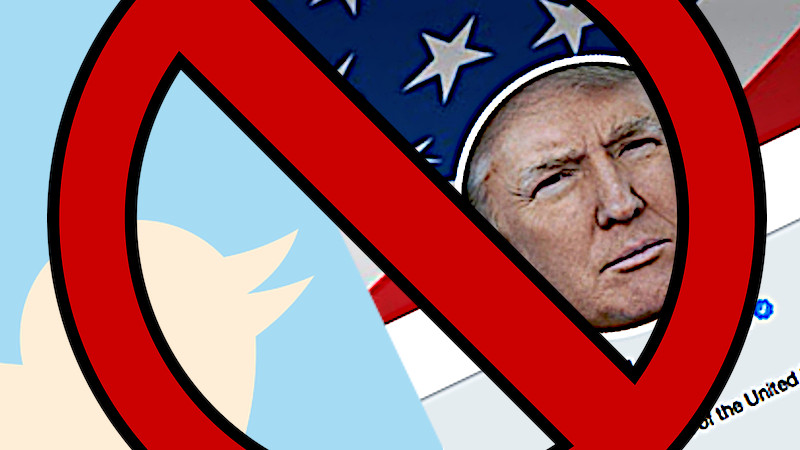 This was Twitter Safety’s January 8 post, full of noble concern: “After close review of recent Tweets from the @realDonaldTrump account and the context around them – specifically how they are being received and interpreted off Twitter – we have permanently suspended the account due to the risk of further incitement of violence.”

Is it ever wise for a social media platform to suspend the accounts of political representatives, especially if they are of such character as Donald J. Trump?  The question is a big tangle, though anything to do with the exiting US president encourages hotted up simple binaries, most of it emotive rather than cerebral.  As with any forms of expression, the inner censor starts taking hold against content that is disliked, considered offensive or, as in the recent round of Trump tweets, delusionary and inciting in character.

The reaction of Representative Jamaal Bowman (D-NY) to Twitter’s suspension of Trump’s account was but one example of the censor writ large.  Bowman had taken to the platform to demand that Twitter suspend the president’s account, and asked why he was “still out there tweeting after inciting a fascist mob”.  This streakily hyperbolic statement was nothing compared to the joyous, ghoulish note he posted on learning of the suspension: banning the president from Twitter had been as significant as the capturing Saddam Hussein.  Wonderful of Bowman to remind voters of a catastrophic, illegal invasion of a country supposedly armed to the teeth with weapons of mass destruction, and eager to deploy them against the US and its allies.

The reasons for Twitter’s suspension of the account were themselves political acts initiated by a market actor.  Barring the most powerful office holder in the United States from having an avenue to his supporters is an open admission to political interference.  It is a position on restricting and suppressing forms of communication to constituents and voters, notably ones deemed unsavoury in accordance to piecemeal rules made by market considerations.

The company actually identifies the culprit tweets as well. One was the announcement that Trump would not be attending President-elect Joe Biden’s inauguration on January 20.  (Is it even their business to be worried about ceremonial protocol?)  The second involved praise for “75,000,000 great American Patriots who voted for me,” and were not to be “disrespected or treated unfairly”.  The timing was important here, given the march on and into the US Capitol a few days prior.

Twitter duly editorialises, disapproves and dispenses.  “Due to the ongoing tensions in the United States, and an uptick in the global conversation in regards to the people who violently stormed the Capitol on January 6, 2021, these two Tweets must be read in the context of broader events in the country and the ways in which the President’s statements can be mobilized by different audiences, including to incite violence, as well as in the context of the pattern of behaviour from his account in recent weeks.”

The virtue of having Trump vent his spleen all over Twitter should be palpably obvious: to open a door to his indignant, at times adolescent world, one unvarnished and uncontaminated by any advisory circle.  Conventions could be trashed; the acceptable could be sullied and soiled.  This did wonders for instability and bedevilled the Washington establishment, but it was an inspiring weapon for his supporters and a shock to the business-as-usual cadres who think democracy is good as long as it is conveniently correct.  The president was no longer kept within the cage of sober expertise and cautious control.  He was, quite literally, in global circulation.

Trump supporters are naturally indignant about the move, and have, erroneously, drawn the wrong conclusion about whether his free speech has been affected or not.  The First Amendment was intended to protect citizens from government action vis-à-vis that speech, not the inconsistent, bumbling decisions of well-moneyed social media behemoths.  Jeremy Mishkin of Montgomery McCracken in Philadelphia, an advocate versed in First Amendment jurisprudence, suggests that the protection does not apply if Twitter “decides it is not going to participate in disseminating someone else’s message.”  A newspaper, he analogises, is not obligated to publish the news release of a politician.

The more salient, and concerning conclusion to draw from the ban is the control of political content as it is shared on such private corporate platforms.  That remains the troubling preserve of Mark Zuckerberg, Jack Dorsey and company.  Fashion, whim and being in the good books of the moment are their guiding lights.  “It’s about the free market,” Jake Millar tells us in GQ, “not free speech.”

As it happens, that fashion and whim favours the Democrats, who are ecstatic that social media companies have finally discovered their censoring mettle.  Jennifer Palmieri, former White House Communications director and director for communications for Hillary Clinton’s 2016 campaign made no secret of the alignment of interests.  “It has not escaped my attention that the day social media companies decided there actually IS more they could do to police Trump’s destruction behavior was the same day they learned Democrats would chair all the congressional committees that oversee them.”  Cosy times lie ahead.

Trenchant criticism of the ban has been marginalised as apologias for domestic terrorism and the rants of pro-Trump fanatics.  More measured analysis has been, as always with assessing Trump, absent. The ACLU did state, if tepidly, that such moves were dangerous to expression.  “It should concern everyone when companies like Facebook and Twitter wield unchecked power to remove people from platforms that have become indispensable for the speech of billions.”

The reaction in other countries was also one of concern.  German Chancellor Angela Merkel, as she so often does, had a punt both ways.  Her spokesman, Steffen Seibert, accepted that social media platforms “bear great responsibility for political communication not being poisoned by hatred, lies and by incitement to violence.”  But freedom of opinion was “fundamental” and should only be tampered with in accordance “to the law and within the framework defined by legislators – not according to a decision by the management of social media platforms.”  To that end, Merkel, he explained to reporters, found the decision to block the accounts of the US president “problematic”.

In Australia, government ministers have taken issue with Twitter’s erratic approach to hosting content.  Why kick Trump off the platform, yet host offensive, doctored material by Chinese outlets featuring a bloodthirsty Australian soldier, knife pressed at the throat of an Afghan child?  That image, fumed Michael McCormack in a one week spell as acting prime minister, “has not been taken down, and that is wrong.”

Australian government backbencher Dave Sharma, while agreeing in principle that banning Trump from the platform might have been appropriate given the facts, feared “the precedent of big tech making decisions about whose speech, and which remarks, are censored and suppressed.”

In the guise of Twitter, the US has found a political agent of interference of its own.  It has become a gatekeeper curating material that is released to the public.  Other big tech giants are doing the same, cleansing platforms of the unfashionably scurrilous.  Move over, you foreign rascals; Silicon Valley is here to shape and determine the content of US politics and, if necessary, the politics of other countries.

The Lawfare Podcast
<p>The Lawfare Podcast features discussions with experts, policymakers, and opinion leaders at the nexus of national security, law, and policy. On issues from foreign policy, homeland security, intelligence, and cybersecurity to governance and law, we have doubled down on seriousness at a time when others are running away from it. Visit us at www.lawfareblog.com.</p><p>Support this show <a target="_blank" rel="payment" href="http://supporter.acast.com/lawfare">http://supporter.acast.com/lawfare</a>.</p><br /><hr><p style='color:grey;font-size:0.75em'> See <a style='color:grey' target='_blank' rel='noopener noreferrer' href='https://acast.com/privacy'>acast.com/privacy</a> for privacy and opt-out information.</p>
Lawfare Archive: Deterring Russian Cyber Intrusions
by The Lawfare Institute

From December 24, 2016: Whatever the President-elect might say on the matter, the question of Russian interference in the presidential election is not going away: calls continue in the Senate for an investigation into the Kremlin’s meddling, and the security firm Crowdstrike recently released new information linking one of the two entities responsible for the DNC hack with Russia’s military intelligence agency. So how should the United States respond?

In War on the Rocks, Evan Perkoski and Michael Poznansky recently reviewed the possibilities in their piece, “An Eye for an Eye: Deterring Russian Cyber Intrusions.” They’ve also written on this issue before in a previous piece titled “Attribution and Secrecy in Cyber Intrusions.” We brought them on the podcast to talk about what deterrence of Russian interference would look like and why it’s necessary.