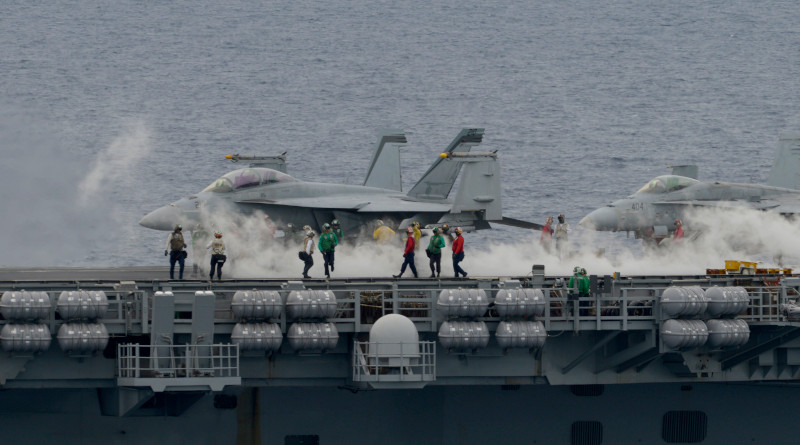 Analysts have recently been spouting a lot of malarkey regarding the US-China contest in the South China Sea.  This piece sets the record straight.

Perhaps most provocative was Singapore’s former Permanent Secretary in the Ministry of Foreign Affairs Ambassador Bilahari Kausikan’s “Watch what you wish for, including a Biden victory.” https://asia.nikkei.com/Opinion/Watch-what-you-wish-for-including-a-Biden-victory

I admire Kausikan’s courageous free thinking  and I have often agreed with many of his contrarian positions.  But I do take issue with the position expounded in his current piece. Kausikan praises US President Donald Trump for understanding power and its use and asserts that his “bombing of Syria did much to restore the credibility of American power.”  He holds that “hard  power needs to be balanced by hard power; the balance stiffened by credible nuclear deterrence to keep other nuclear powers in check.

He cites as an example of the decline of US credibility former president Barack Obama’s “failure” to follow through regarding his response to a reporter’s loaded question that a chemical attack by the Syrian government on its citizens would be a “red line for us”. He subsequently gave a speech urging action against Syria. But he qualified that by saying Congress should authorize any military action. There was little support either in Congress or among the public for such action and thus it did not occur. This is how US democracy is supposed to work in such situations, not by unilateral Presidential use of the military to back up an impromptu remark.

As another example of Obama’s failure to understand and use American power appropriately, Kausikan alleges “Obama did nothing … as Pyongyang pushed forward with its nuclear program”. Apparently he thinks the U.S. should attack North Korea and risk the almost certain wide spread devastation of Seoul and the deaths or injuries of many of its inhabitants ,as well as a nuclear response by North Korea—perhaps targeting Japan.

Kausikan asks “If you are reluctant to use conventional arms, how can you credibly threaten to use nuclear weapons?”  He says “You need muscle and the will to use it to make them respect your values and rules”.  He seems to be advocating that the U.S. use its military power to unilaterally enforce its political position regardless of international law or collateral civilian damages.  Is this something to be promoted or  even passively accepted?

Kausikan seems to be channeling the misanthropic Hobbesian assumption and argument that military power is the end all and be all of international relations. For Hobbes, the “war of every man against every man,” is a natural constant and violent condition in which each individual has a natural right to everything, regardless of the interests of others. All other aspects are secondary. https://www.utm.edu/staff/jfieser/class/300/socialcont.htm

This view as applied to international relations accepts war as natural and inevitable. It is the modern version of ‘might makes right’, the prevalent rationale of the great powers during the colonial era.

As a corollary of this theory Kausikan states “freedom of navigation can be exercised as a right, and not by China’s leave and favor.”  In other words he supports the US unilateral interpretation and enforcement with gunboats of provisions in a treaty it has not even ratified.

This ‘might makes right’ philosophy does not benefit small countries like Singapore which Kausikan represented well for many years.  Instead it asymmetrically benefits the great powers – including China’s actions in the South China Sea.  Is that what Kausikan really means and wants? Or like US President-elect Joseph Biden said in his victory speech, great powers lijke “the US need to lead not by the example of power but by the power of example.”

Another bunch of malarkey was offered by the Philippines former Supreme Court Justice Antonio Carpio of the Philippines in an opinion piece full of fallacious statements. https://opinion.inquirer.net/135024/south-china-sea-as-zone-of-peace. Carpio says that China’s position is that “in its own Exclusive Economic Zone (EEZ) in the South China Sea, the FONOPs (Freedom of Navigation Operations) of the US and its allies cannot include naval drills.” He reasons that if the Philippines arbitration victory denying China’s historic claim in the South China Sea is accepted by China, many of the disputes will have been resolved and the U.S. and its allies can conduct FONOPs, including naval drills, in these countries’ EEZs.  “There being a recognition of FONOPs in the EEZs of ASEAN coastal states, there will no longer be a need for the U.S. and its allies to conduct frequent FONOPs in these EEZs.”

This is nonsensical gibberish.  The U.S. does not conduct FONOPs to challenge China’s nine-dash line historic claim. Its FONOPs target China’s claimed closing lines around the Paracels; its prior permission regime for innocent passage of foreign warships in its territorial seas; and its territorial claims to features that were originally below high tide before being artificially enhanced.

China has never challenged normal transit of US naval vessels or even naval exercises in its EEZ that pay due regard to its laws and the UN Convention on the Law of the Sea (UNCLOS) as the latter requires. Nor has it challenged freedom of commercial navigation in its EEZ.  It does oppose military activities or any activities – that violate its laws and its interpretation of UNCLOS– that treaty that China has ratified and the U.S. has not but unilaterally interprets and enforces to its benefit.

It is true that China has done this before but the present is a very different situation.  China and the Philippines are negotiating co-operative agreements for petroleum exploration and appear to have reached one regarding a commercial joint venture in undisputed Philippine waters.   It is highly unlikely that the Philippines would allow exploration on the Reed Bank to proceed if it thought China would object and scotch existing commercial co-operation.   In fact regarding Reed Bank, Philippines Energy Secretary Alfonso Cusi said “If they [ Philippines majority owned Forum Energy] can’t do it and they need a partner, they have to [emphasis added] partner with China.” https://oilprice.com/Latest-Energy-News/World-News/The-Philippines-Could-Start-Oil-Drilling-In-South-China-Sea-Without-China.html#:~:text=The%20Philippines%20could%20begin%20exploring,in%20the%20South%20China%20Sea.

That sounds to me like some sort of understanding has been reached that would prevent China’s interference with Forum Energy contractors as they proceed to explore Reed Bank.

Then there have been suggestions that the South China Sea and the Arctic Ocean situations are similar.  There are similarities but the differences are more profound. There is no ‘historic’ claim to most of the area nor an arbitration decision which settles most disputes.  There are indigenous peoples living in the Arctic Ocean, but not in the South China Sea.  The Arctic is not a site of major trade routes – at least not yet.

But there is one interesting link between China’s position on freedom of navigation in the two semi-enclosed seas.  China insists on it through the Northwest Passage—a potential alternative trade route between it and Europe. It insists on it in the Arctic. https://nationalinterest.org/blog/buzz/will-arctic-become-next-south-china-sea-155046

But Russia insists that parts of the route fall within its internal waters and that transits must have its permission. This position is based on geography and history is somewhat analogous to China’s historic nine-dash line claim in the South China Sea. As such the link may ensure that China will not use its historic claim to constrain commercial freedom of navigation.  In fact it is probably insurance that it will not do so. Otherwise its hypocrisy will be plain for all to see.

As the South China Sea situation approaches a boil, fallacies are flying fast and furious. Analysts and policy makers must be careful to separate the wheat from the chaff.

Another version of this piece first appeared in the Asia Times.