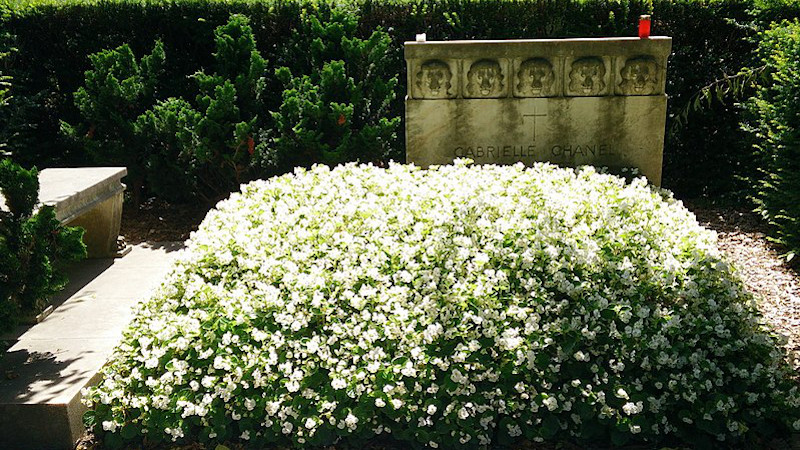 French fashion designer, perfumer and Nazi agent Gabrielle “Coco” Chanel, who died exactly 50 years ago, is buried in Lausanne. After the war she moved to Switzerland to escape criminal charges of collaboration, spending around ten years by Lake Geneva.

“Coco Chanel drank only champagne,” says a barman at the Beau-Rivage Palace Hotel, where Chanel had a suite. Living in exile could still be done in style, after all.

The luxury Beau-Rivage and the Lausanne Palace, where she also spent time, are both worlds away from the poorhouse hospice where Chanel was born in 1883 and the orphanage where she grew up and learnt to sew.

Through creative vision, hard work and knowing the right (and wrong) people, by 1935 Chanel was employing some 4,000 workers and had five boutiques in central Paris. However, after the war her past – notably working as a German agent codenamed “Westminster” – caught up with her and in 1945 she found herself with a one-way ticket to French-speaking Switzerland.

Once settled in Lausanne, she stayed and socialised at the top hotels and went for beauty treatments at the Clinique Valmont. She could also be found at the Steffen tearoom in Montreux, a meeting place for celebrities, and the Chalet-des-Enfants restaurant up in the surrounding hills.

Many of these places mention still Chanel in their marketing – the Chalet-des-Enfants website says she would stop there for a “bowl of milk and a slice of flan” and the Lausanne Palace even has a Coco Chanel Suite “largely inspired” by the designer. (At around CHF3,000 ($3,400) a night in summer this is a bargain compared with the CHF24,000 a night for the Coco Chanel Suite at the Ritz Paris – and the rate can go higher than that.)

She apparently rarely left her room at the Beau-Rivage, staying on her balcony and enjoying the view of the lake and mountains. One of her dogs is even said to be buried in a pet cemetery reserved for four-legged hotel guests.

However, when she did venture out for a lakeside promenade, the fact that her chauffeur was following her in a Cadillac suggests she wasn’t bothered about keeping a low profile.

But it wasn’t all parties and promenades. It appears Chanel also spent part of her time in exile preparing her grand return once the dust had settled. In 1954, at the age of 71, she returned to Paris and re-opened her couture house, presenting her first come-back collection.

Not that she forgot Switzerland. In 1966 she bought a house, “Le Signal”, at Sauvabelin, in the wooded hills above Lausanne. The former finishing school, built in the Heimatstil, was where she would invite various celebrity friends, such as French ballet star Serge Lifar, for whom she had designed outfits.

“I have always needed security. In Switzerland one can have this security,” she once said.

Whereas Lifar died in Lausanne and was buried in Paris, Chanel did the opposite. She died on January 10, 1971, at the Ritz Paris, where she had lived for more than 30 years of her life. But she wanted to be buried in Lausanne.

Her grave, which she designed herself, is in the Bois-de-Vaux Cemetery, where her neighbours include Pierre de Coubertin, founder of the International Olympic Committee, and French lexicographer Paul Robert.

The grave is covered in white flowers (cotoneasters), as requested, and is next to a white stone bench. The gravestone features five lions (her lucky number and her astrological sign). What’s more, the stele is not on the tomb but in front of it – another wish. “I don’t want a stone on my head – in case I want to return,” she explained.

Perhaps unsurprisingly, none of this – not one word about her time in Switzerland – is mentioned in the timeline of the official Chanel website, which jumps from 1945 (headline: “GIs love Chanel”) to 1954 (“Welcome back”).

The article How Coco Chanel Spent Her Exile In Switzerland appeared first on Eurasia Review.