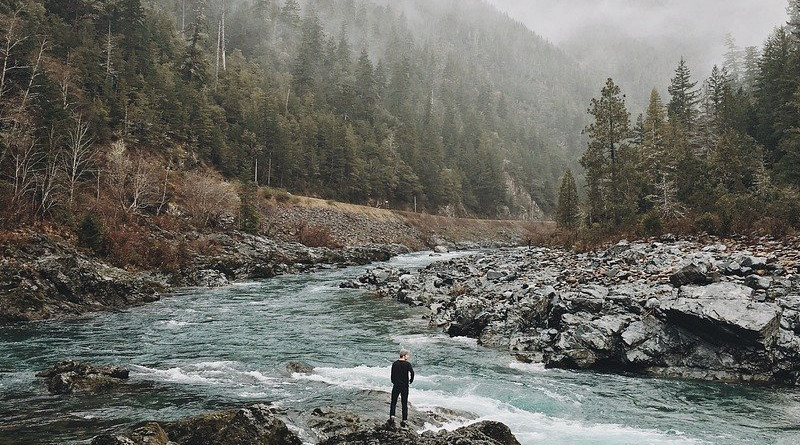 When historian Frederick Jackson Turner presented his famous thesis on the US frontier in 1893, he described the “coarseness and strength combined with acuteness and acquisitiveness” it had forged in the American character.

Now, well into the 21st century, researchers led by the University of Cambridge have detected remnants of the pioneer personality in US populations of once inhospitable mountainous territory, particularly in the Midwest.

A team of scientists algorithmically investigated how landscape shapes psychology. They analysed links between the anonymised results of an online personality test completed by over 3.3 million Americans, and the “topography” of 37,227 US postal – or ZIP – codes.

The researchers found that living at both a higher altitude and an elevation relative to the surrounding region – indicating “hilliness” – is associated with a distinct blend of personality traits that fits with “frontier settlement theory”.

“Such rugged terrain likely favoured those who closely guarded their resources and distrusted strangers, as well as those who engaged in risky explorations to secure food and territory.”

“These traits may have distilled over time into an individualism characterised by toughness and self-reliance that lies at the heart of the American frontier ethos” said Götz, lead author of the study.

“When we look at personality across the whole United States, we find that mountainous residents are more likely to have psychological characteristics indicative of this frontier mentality.”

Low levels of “extraversion” reflect the introverted self-reliance required to thrive in secluded areas, and a low level of “conscientiousness” lends itself to rebelliousness and indifference to rules, say researchers.

“Neuroticism” is also lower, suggesting an emotional stability and assertiveness suited to frontier living. However, “openness to experience” is much higher, and the most pronounced personality trait in mountain dwellers.

“Openness is a strong predictor of residential mobility,” said Götz. “A willingness to move your life in pursuit of goals such as economic affluence and personal freedom drove many original North American frontier settlers.”

“Taken together, this psychological fingerprint for mountainous areas may be an echo of the personality types that sought new lives in unknown territories.”

The researchers wanted to distinguish between the direct effects of physical environment and the “sociocultural influence” of growing up where frontier values and identities still hold sway.

To do this, they looked at whether mountainous personality patterns applied to people born and raised in these regions that had since moved away.

The findings suggest some “initial enculturation” say researchers, as those who left their early mountain home are still consistently less agreeable, conscientious and extravert, although no such effects were observed for neuroticism and openness.

The scientists also divided the country at the edge of St. Louis – “gateway to the West” – to see if there is a personality difference between those in mountains that made up the historic frontier, such as the Rockies, and eastern ranges e.g. the Appalachians.

While mountains continue to be a “meaningful predictor” of personality type on both sides of this divide, key differences emerged. Those in the east are more agreeable and outgoing, while western ranges are a closer fit for frontier settlement theory.

In fact, the mountainous effect on high levels of “openness to experience” is ten times as strong in residents of the old western frontier as in those of the eastern ranges.

The findings suggest that, while ecological effects are important, it is the lingering sociocultural effects – the stories, attitudes and education – in the former “Wild West” that are most powerful in shaping mountainous personality, according to scientists.

They describe the effect of mountain areas on personality as “small but robust”, but argue that complex psychological phenomena are influenced by many hundreds of factors, so small effects are to be expected.

“Small effects can make a big difference at scale,” said Götz. “An increase of one standard deviation in mountainousness is associated with a change of around 1% in personality.”

“Over hundreds of thousands of people, such an increase would translate into highly consequential political, economic, social and health outcomes.”