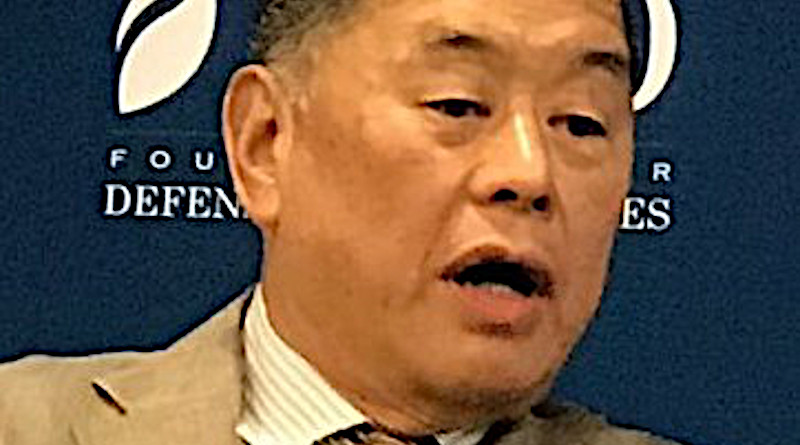 A court has found Hong Kong dissident Jimmy Lai not guilty of intimidation. But that does not mean he, or Hong Kong, can rest easy – especially as he faces the prospect of life in prison without any public support from the most important institution in his life: the Vatican. As global political and thought leaders denounce Beijing’s encroachments, Pope Francis remains uncharacteristically silent.

Lai, the self-made billionaire publisher of the Apple Daily newspaper, could have been sentenced to five years in jail for allegedly intimidating an employee of rival Oriental Daily News, whom Lai accused of stalking him for years. Lai said he cursed at the man during a 2017 Tiananmen Square commemoration, but prosecutors pressed no charges until this February.

Magistrate May Chung ruled last Thursday that Lai expressed a spontaneous flash of anger, not a calculated effort to intimidate the man, whose identity has been kept secret.

The trumped-up indictment was China’s own harassment of Lai for refusing to toe the Chinese Communist Party line. But another trial awaits Lai, the most prominent of the 25 people China has arrested so far for breaking its new “national security law.” If convicted, the 71-year-old would die in prison – a prospect his fellow reporters say is designed to intimidate them, as well. “We have now seen now what we name ‘white terror’ turn into a actuality,” said Chris Yeung, chairman of the Hong Kong Journalists Association.

China must suppress freedom of speech, stifle peaceful protests, and quash public debate for its own survival. “The bravery of people like Jimmy Lai, and, frankly, of everyone who took to the streets to protest, scares the Chinese Communist Party and is one of the reasons they are cracking down with such force now,” said Annie Wilcox Boyajian of Freedom House. The CCP seeks to suppress the “incredible, fact-based reporting coming out of Hong Kong,” which threatens its legitimacy.

Chinese authorities are trying to turn, not merely reporting, but even paid advertising into a crime punishable ex post facto. One of the six people police arrested during the same August 10 raid as Jimmy Lai is pro-democracy politician Agnes Chow, who said police appear to be charging her for an ad she took out in the Japanese-owned Nikkei newspaper a year before the national security law took effect. The law does not claim the right to apply retroactively. Chinese authorities also manipulated the calendar by ordering Chow to report to the police – who now have a presumption against granting bail – on December 2, the day before her 24th birthday. Chow said she wants “the world” to “know that the national security law is actually not a legal thing, but a political tool for the regime, for the government to suppress political dissident.”

The United Nations agrees with Chow. UN human rights experts chided Beijing in a 14-page letter dated September 1, which they took the unusual step of making public just 48 hours later. “National security is not a term of art, nor does the use of this phrase as a legislative matter give absolute discretion to the state,” they wrote. The law bans acts of “secession, subversion or terrorism” – wording often used as a pretext to criminalize “a range of acts including and not limited to speech and assembly,” they wrote. “Subversion is generally understood as a ‘political crime’” that is “deployed to punish individuals for what they think (or what they are thought to think).”

They urged the CCP’s “reconsideration” of the law. China’s foreign ministry responded by justifying the law on the grounds that it “punishes an extremely small number and protects the absolute majority.”

The beating heart of the American creed is the rejection of a majoritarian view of unalienable rights. Even the least religious of the Founding Fathers considered human rights to be innate, God-given, and universal – incapable of being canceled. “The ordaining of laws in favor of one part of the nation, to the prejudice and oppression of another, is certainly the most erroneous and mistaken policy,” wrote Benjamin Franklin. “An equal dispensation of protection, rights, privileges, and advantages, is what every part is entitled to, and ought to enjoy.” This understanding means the difference between slavery or self-determination, dependence or independence, and tyranny or freedom.

As this grand drama plays out, including the serial unjust trials of Hong Kong’s best-known Catholic Christian, Pope Francis remains “disengaged,” George Weigel wrote in The Washington Post. Vatican advisers believe their silence will buy full diplomatic relations with China and “a place at the table where the great issues of world affairs are sorted out,” he added. They have learned nothing from the “failed Vatican Ostpolitik in Central and Eastern Europe during the 1960s and 1970s,” which “succeeded only in disabling and demoralizing local Catholic communities, while the Vatican itself was deeply penetrated by communist intelligence services.”

No one should take that message to heart more than Pope Francis, who professes to lead a church that Jesus promised would withstand the gates of Hell (St. Matthew 16:15-20) and that He commanded to “occupy until I come” (St. Luke 19:13).

*About the author: Rev. Ben Johnson is Executive Editor of the Acton Institute’s flagship journal Religion & Liberty and edits its transatlantic website.

Source: This article was published by the Acton Institute