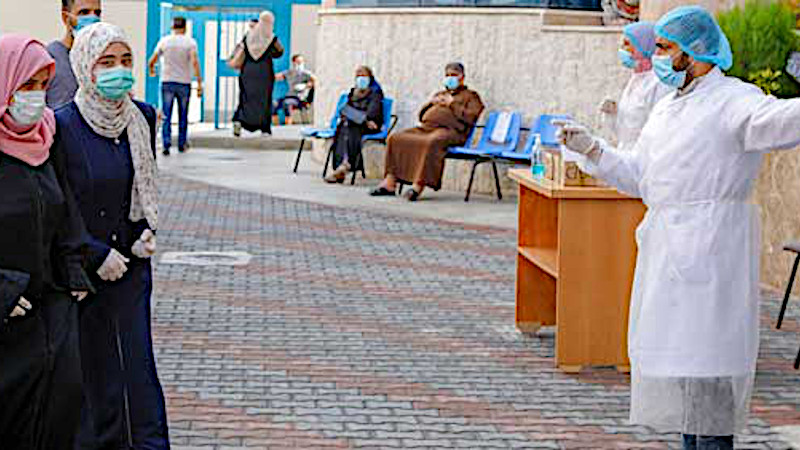 If the coronavirus is not deemed a biological weapon, is the heavily-publicized Covid-19 vaccine in danger of being weaponized when over 159,000 Palestinians who have tested positive in Occupied Palestinian Territories (OPT) are being denied treatment during a deadly pandemic?

Since the beginning of the pandemic last March, nearly 1,600 Palestinians in the OPT have died of the virus.

AI says the Israeli government must stop ignoring its international obligations as an occupying power and immediately act to ensure that COVID-19 vaccines are equally and fairly provided to Palestinians living under its occupation in the West Bank and the Gaza Strip,

“While Israel celebrates a record-setting vaccination drive, millions of Palestinians living under Israeli control in the West Bank and the Gaza Strip will receive no vaccine or have to wait much longer – there could hardly be a better illustration of how Israeli lives are valued above Palestinian ones.”

Dr Ramzy Baroud, a journalist and Editor of The Palestine Chronicle, told IPS Israel’s exclusion of the occupied Palestinian people from having access to vaccines is entirely consistent with Israel’s trajectory of racism, where Palestinians are exploited for their land, water and cheap labor, while never factoring in as an item on Israel’s list of priorities, even during the time of a deadly pandemic.

“Frequently we speak of Israel’s apartheid, often illustrating that in terms of giant walls, fences and military checkpoints that cage in Palestinians. But in Israel, apartheid runs much deeper as it reaches almost every facet of society where Israeli Jews, including settlers, are treated far better than Palestinians, whether those living in Israel or in the occupied territories,” he pointed out.

“Excluding Palestinians from a vaccine that is necessary to save the lives of thousands is part of protracted and systemic Israeli apartheid and racial discrimination”, said Baroud, a Non-resident Senior Research Fellow at the Center for Islam and Global Affairs (CIGA) and also at the Afro-Middle East Center (AMEC).

As of 3 January 2021, according to the World Health Organization (WHO), 159,034 Palestinians in the Occupied Palestinian Territories (OPT), including East Jerusalem, have so far tested positive for coronavirus since the first confirmed case was reported in March 2020.

As the Palestinian authorities in the West Bank and de facto Hamas administration in the Gaza Strip cannot independently fund vaccines and their distribution among the Palestinian population, they depend on global co-operation mechanisms such as COVAX, which still has not begun distributing vaccines, said Amnesty International.

“Israel must provide full financial support to ensure that the vaccine is promptly distributed to the Palestinian population without discrimination. Israel must also lift the blockade on the Gaza Strip to enable the proper functioning of its health system in the face of the COVID-19 pandemic”.

Gaza’s health care system –- subjected to half a century of occupation and more than a decade of blockade -– is already unable to meet the needs of its population. The COVID-19 pandemic and lack of fair access to vaccines have only magnified the discrimination and inequality faced by the Palestinian population, said Amnesty International.

Meanwhile, 10 human rights and non-governmental organizations (NGOs) are urging the Israeli authorities to live up to their legal obligations and ensure that quality vaccines be provided to Palestinians living under Israeli occupation and control in the West Bank and the Gaza Strip as well.

Dr Baroud said even before the vaccines arrived in Israel, Tel Aviv has greatly mishandled the crisis from the onset.

In Gaza, which has been under Israeli siege for many years, he noted, the problem was much more severe, as the population of two million people had to cope with the ravages of the disease without any tools to test for the virus, let alone to contain it.

“While Israel’s behavior is expected, it is also self-defeating, as Israelis and Palestinians are constantly in contact through the military occupation, the prison system and other forms of such repugnant interactions”.

There can be no containing the pandemic in Israel if it continues to spread in Palestine. The Coronavirus doesn’t respect Israel’s matrix of control, of walls, checkpoints and the likes, said Dr Baroud, author of five books, including “These Chains Will Be Broken: Palestinian Stories of Struggle and Defiance in Israeli Prisons” (Clarity Press). www.ramzybaroud.net

“The views of marginalized groups must be at the forefront of any decision-making to ensure that national vaccine policies aren’t exclusionary or discriminatory. All states must confront existing inequalities to ensure everyone has access to vaccines,” said AI’s Higazi.

In early December, Israel reached an agreement with Pfizer pharmaceutical company to supply 8 million doses of its newly approved COVID-19 vaccine – enough to cover almost half of Israel’s population of nearly 9 million since each person requires two doses.

Israel also reached a separate agreement with Moderna to buy 6 million doses of its vaccine – enough for another 3 million Israelis, according to AI.

As the race to distribute COVID-19 vaccines gathers pace, Amnesty International calls on states and companies to ensure that no one is denied access to health care, including vaccines, because of where they live, who they are or what they earn.