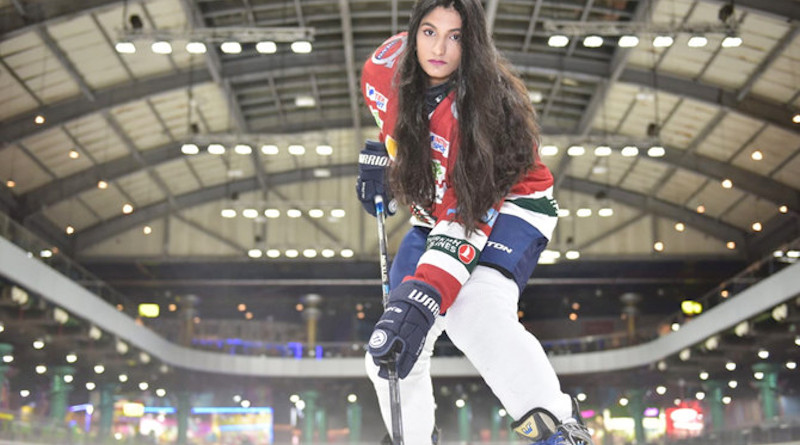 Ice skating has made its way to the Kingdom, with Saudi and Saudi-based skaters doing their best to raise awareness about the sport and attract the attention they feel it deserves.

“Whenever I am asked about what ice skating means to me, I will always say it means a lot because sometimes I feel like I can fly and do all the crazy moves I have in mind,” 23-year-old hockey player Raeah Al-Attas told Arab News, explaining why the sport was so special to her. “And I’m good at it, so why not?”

She said that ice skaters in the Kingdom were using social media as a platform to raise awareness about the sport, a move she regarded as necessary.

“Unfortunately, the ice skating community is not receiving the attention it deserves, even if you are the best. And our duty toward that is to raise awareness on social media and this is what we have been doing for the past 2 years.”

Saudi-born Fadi Al-Ali has more than 175,000 followers on TikTok, having joined the platform last October. He has intrigued his audience with his freestyle dances and extreme stunts on the ice rink, inspiring others to also get their skates on.

His videos show him leaping over objects while spinning mid-air, doing handstands and even breakdancing on ice.

He began skating in Saudi Arabia, which is better known for desert landscapes rather than icy ones and found ways to perfect his performance throughout the years, skating on every icy surface he could find and even recording tutorials from time to time.

“The fans are always appreciative of what I do, they’re very happy,” he told Arab News. “People are really encouraged to try ice skating because of my content. I started ice skating at a young age here in the Kingdom, it was the first place I started.”

He raved about TikTok, saying it allowed him to share his excitement for the sport and spark enthusiasm for it in others.

“TikTok has become a platform that even allowed me to share it (my passion for ice skating) more than I could ever before, and ever since it has given me the opportunity to do it more. Everything is now open for anybody to make their dreams come true, it’s all about how willing you are to achieve it.”

Al-Ali said he saw many Saudi skaters with great potential and believed the sport could gain more popularity, but that many faced an issue when it came to developing their skills.

“They (skaters) fall under the freestyle category but (would) rather not be labeled,” he added. “It’s all about your imagination. What we imagine we apply on the ice. It’s as simple as that.”

He formed the “Skate Army,” a group of freestylers who combine ice skating, roller skating or rollerblading.

Ice skaters were the first to join back in 2007-2008, with newcomers swelling the ranks over the years.

“It all started in a mall in Jeddah. For a while, we were trained under the late instructor Ali Ma’arouf. Before his passing by a couple of weeks, he kept on telling me: ‘You’re the person I’m counting on in this rink, you’re the one that’s going to lead the guys to something.’”

He added that although not many people were interested in the beginning, he never gave up and neither did they because they knew he was there for them and was always going to try and deliver something.

His main goal is to be able to provide those who are interested in the sport with proper training, guidance, facilities and the right equipment, whether it was for ice skating or any other sport related to skating.

With sights set high, even as far as reaching the Olympics, Al-Ali said that the Skate Army would continue to grow and achieve their goals.