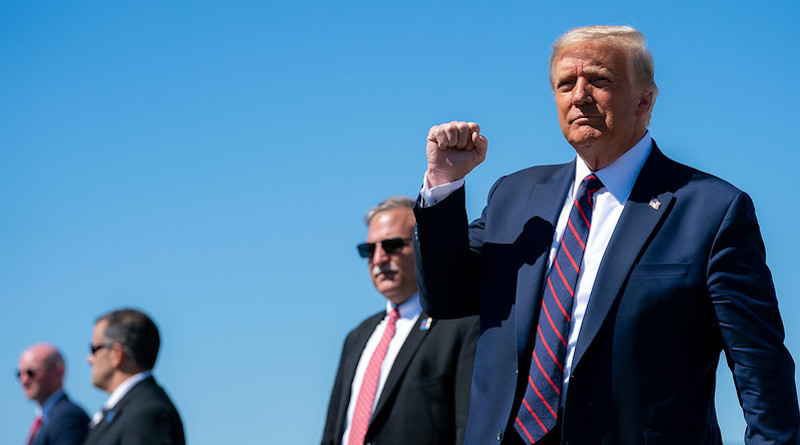 U.S. President Donald Trump on Sunday assailed U.S. news media accounts that in 2018 he belittled American World War I casualties while skipping a centenary commemoration of the end of the war on a rainy day at a cemetery outside Paris.

“The Democrats, together with the corrupt Fake News Media, have launched a massive Disinformation Campaign the likes of which has never been seen before,” the U.S. leader claimed on Twitter. “They will say anything, like their recent lies about me and the Military, and hope that it sticks….”

The Atlantic magazine reported late last week that the U.S. leader rejected going to the World War I cemetery at Aisne-Marne in part because he feared his hair would become disheveled in the rain. The account, based on four anonymous sources, said that Trump commented to senior staff aides on the morning of the November event, “Why should I go to that cemetery? It’s filled with losers.”

On the same trip, the magazine said, Trump referred to the more than 1,800 U.S. Marines who lost their lives during the Belleau Wood battle as “suckers” for getting killed.

The Republican Trump, facing a difficult re-election contest November 3 against his Democratic opponent, former Vice President Joe Biden, immediately rejected the Atlantic’s account of his comments. But several other U.S. news outlets have subsequently confirmed from their own unnamed sources that Trump was uninterested in attending Aisne-Marne event. He did attend a separate commemoration of allied war dead the following day.

The White House said at the time that Trump called off the visit to the Aisne-Marne cemetery because the foul weather would have made it dangerous for him to make a helicopter flight there. His chief of staff at the time, retired Marine Corps Gen. John Kelly, attended the ceremony after traveling there by motorcade.

During a Friday news conference, Trump said he “called home, I spoke to my wife (first lady Melania Trump) and I said ‘I hate this. I came here to go to that ceremony.’ And to the one that was the following day which I did go to. I said I feel terribly. And that was the end of it.”

Fact checkers, however, said Trump couldn’t have “called home” to Washington to talk to his wife because she was in Paris accompanying him on the trip and that night, they had dinner with French President Emmanuel Macron.

“If what is written in The Atlantic is true, it’s disgusting,” Biden said. “And it affirms what most of us believe to be true: that Donald Trump is not fit to do the job of president, to be the commander in chief.”

“I’m looking at the Donald Trump I know,” Wilkie said. “I’ve watched this president sign letters of condolences” written to families of those killed in action.