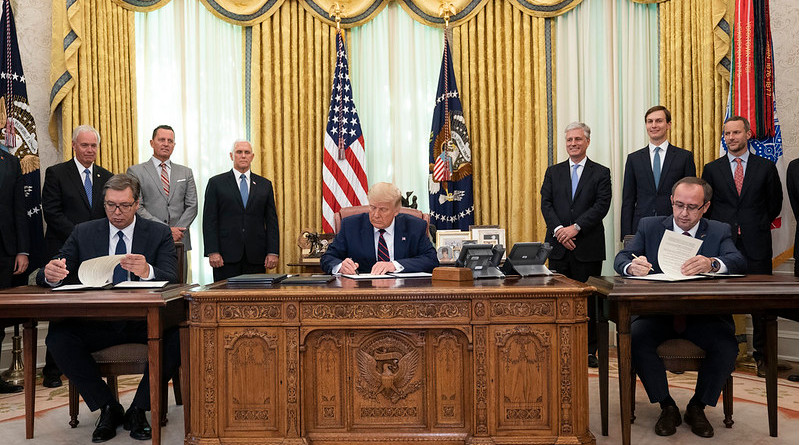 Beyond the hype, three actors with questionable legitimacy have produced a non-agreement agreement that changes little with the little good it does – and can easily be ignored in several of the areas where it does harm.

Abasic diplomatic rule recommends that heads of state should not come together for a high level meeting unless they have an agreement ready to sign.

Donald Trump learned this late after rocketing to a couple of failed soirees with Kim Jong Un. And he learned it badly, as can be seen in yesterday’s performance of a document signing with Kosovo Prime Minister Avdullah Hoti and Serbian President Aleksandar Vučić in Washington.

To be clear, the documents that were signed do not constitute an agreement in the form of a treaty that obligates the states represented by the signatories. Although both Vučić and Hoti signed documents, these documents are not identical in content and there exists no document that includes both of their signatures.

Trump also signed a document, but it was a cover letter thanking Vučić and Hoti for participating in the negotiations, and his envoy Richard Grenell went out of his way to clarify that the United States was not a signatory to, or a guarantor of, any agreement.

Most of what was agreed to in the documents is uncontroversial, more likely to help than hurt, and represents points already agreed to by both states in previous negotiations. Not many people will object to improving cooperation in transport, water, and energy, or to improving communication and understanding between religious communities. Both states seem to have agreed to a temporary freeze in their conflict over recognition and derecognition, which might be a helpful gesture, although it is reasonable to expect that both Serbia and Kosovo will be prepared to abandon this pledge if it becomes politically convenient.

Some eyebrows will be raised by points that appear to be of little relevance to either state, like decriminalising homosexuality (it is not criminalised in either state, and neither state has the kind of diplomatic power that permits it to influence domestic legislation in other countries).

They appear to both commit themselves to acquiring and using American technologies for airport security and, at least implicitly, to avoid Chinese technology in telecommunications networks (China is not mentioned, but this is how interpreters are reading the reference to “untrusted providers“).

What has got the most attention, of course, is the strange introduction of Israel into relations between states in the Balkans. The text signed by Hoti commits Kosovo and Israel to exchange mutual recognition, and the text signed by Vučić pledges that Serbia will move its representative offices in Israel from Tel Aviv to Jerusalem. Trump appeared to signal that he regarded this as an outstanding achievement, celebrating on Twitter the establishment of relations between Israel and “Muslim-majority Kosovo,” and promising that “more Islamic and Arab nations will follow.”

It is likely that an exchange of diplomatic recognition with Israel will be more welcomed than feared in Kosovo, where obtaining international recognition has been the highest priority of the international affairs ministry since it declared independence in 2008. However, the move does complicate relations between Kosovo, the non-UN member with the highest number of international recognitions (101 states), and Palestine, which holds second place (78 states). It was already the case that most states that recognise Palestine do not recognise Kosovo, and vice versa. The unexpected introduction of Israel into the Serbia-Kosovo dispute puts Kosovo and Palestine on an unnecessary collision course that does neither of them any good.

As for Serbia, acceptance of Israel’s recognition of Kosovo could be interpreted as a sign of good will, marking its commitment to suspend its derecognition campaign, or it could be interpreted as a sign of weakness. This is mostly a matter for domestic political debate. Moving the Serbian embassy and trade offices is another matter. This concession compels Serbia to take a stance on the ongoing dispute over the territories Israel has occupied since 1967, a matter that is of no interest to Serbia but is centrally important to all Middle Eastern states. Making good on this promise will be needlessly costly for Serbia.

A similar point could be made about the pledge both states took “to designate Hezbollah in its entirety as a terrorist organisation.“ It seems to be a point of no relevance to states where Hezbollah engages in no activity – until one takes into account that the European Union designates the armed organisations tied to Hezbollah as terrorist but not the political group “in its entirety.“

Agreeing to this point drives a wedge between both Serbia and Kosovo and the EU, and will create a stumbling block if the accession negotiations of either state ever reach the point of discussing Chapter 31 of the Acquis communautaire.

On balance, then, aside from an agreement in principle to suspend confrontation over international recognition, the agreement between Kosovo and Serbia brings a small number of measures that are beneficial to both states, and most of these represent points on which agreement has already been reached in earlier negotiations.

On a range of issues, including relations with China and Middle Eastern states, it introduces problems that could be damaging for both states, but which advance some short-term interests of the Trump administration.

It is not difficult to undertstand why Trump would want to produce a document like this at an event like that the one that was held. He is facing an uphill campaign for reelection, and it is in his interest to appear at a scene where it looks like he is resolving an international conflict.

He will get a few little propaganda points for taking a dig at China through a perceived attack on the Huawei company, and scoring a couple of free field goals for Israel’s Benjamin Netanyahu may help to boost his standing among American evangelical Christians, for whom Jerusalem forms a central part of their prophetic interpretation of the Book of Revelations. And it is possible that seeing Trump preening behind his big desk while the heads of small states squat beside him at card tables could project an image of power, for people of a certain aesthetic disposition.

In any case, the document also provides indications of Trump’s basic weaknesses. The fact that three participants signed separate documents rather than all of them signing an agreement points to his low level of prestige and limited diplomatic capability; the deployment of Israel as a deal sweetener for Kosovo indicates just how few states’ assistance he can call upon.

It is more dificult to understand why Vučić and Hoti would willingly take part in an empty spectacle. Probably both of them calculated that making promises to Trump comes at a low cost.

In the end, a group of three actors, all of them with questionable legitimacy, produced a non-agreement agreement that changes little with the little good it does, and can easily be ignored in several of the areas where it does harm. They also showed that they were willing to subordinate the long-term needs of Kosovo and Serbia to the short-term plans of a bungler who will be a short-term president. It was a peformance with a small burst of bombast and no leadership.

*Eric Gordy is Professor of Political and Cultural Sociology at the School of Slavonic and East European Studies, University College London.

The opinions expressed in the Comment section are those of the authors only and do not necessarily reflect the views of BIRN.

The article Kosovo And Serbia Sort Of Agree To Sort Of Disagree – OpEd appeared first on Eurasia Review.