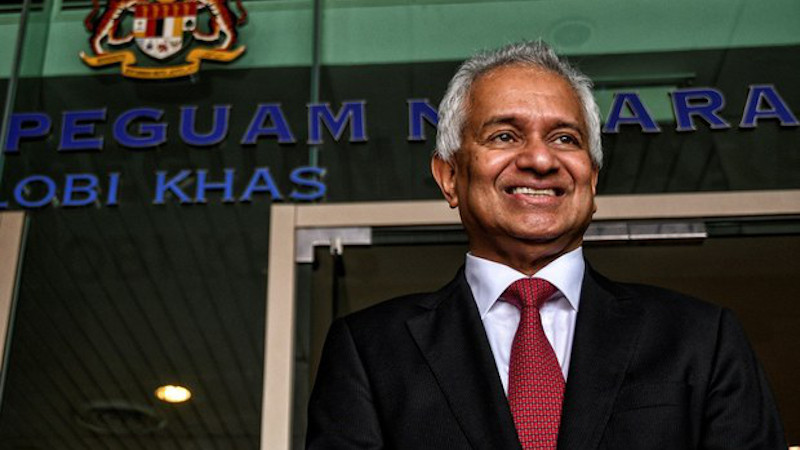 By Noah Lee and Nisha David

Malaysian police are investigating whether Tommy Thomas, the nation’s former attorney general, violated defamation laws and the Official Secrets Act by writing a memoir about his tenure as chief prosecutor for the government of Mahathir Mohamad, officials said Friday.

Mahathir and his predecessor as prime minister, Najib Razak, along with a former solicitor general, are among those raising questions about Thomas’s recently published memoir that, according to excerpts in the media, contains allegations against them. Before Mahathir’s government collapsed last year, Thomas was the attorney general who brought charges of massive corruption against Najib tied to the 1MDB financial scandal.

Seven police reports have been filed against the ex-AG over his book, “My Story: Justice in the Wilderness,” said Deputy Inspector-General of Police Acryl Sani Abdullah Sani.

“Two investigation papers were opened under Section 500 of the Penal Code for defamation, and the OSA [Official Secrets Act]. Give some time for the investigators to do their work. They will determine the right time to call in Thomas and other witnesses relevant to the case to record their statements,” Acryl Sani told BenarNews.

Section 500 stipulates that anyone found guilty of defaming another person shall be punished with up to two years in prison, a fine or both. Acryl Sani did not specify which section under the Secrets Act would be applied to the investigation.

Also on Friday, a Malaysian court ruled to allow defense and prosecution lawyers in an infamous murder trial to file a contempt of court action against Thomas over one of the passages in his book.

Thomas was appointed as attorney general in June 2018, barely a month after the Pakatan Harapan political coalition pulled off an upset in a general election that led to Mahathir returning as prime minster – the office he last held in 2003. Shortly after Mahathir’s resignation in February 2020, Thomas stepped down from his post as well.

Malaysian media published excerpts from the book targeting Mahathir, including:

“It must be kept in mind that Tun’s resignation was personal, only as prime minister. The resignation was confined to that office, not the entire government,” and, “This is probably without precedent in modern politics. A prime minister who is comfortably in power, resigns of his own free will and volition.”

Another excerpt noted that Thomas had unexpected support for the top prosecutor’s post.

“Apparently, a public statement issued by PAS that night stating that they had no objections to my appointment, especially since I had represented the PAS governments of Terengganu and Kelantan in their petroleum royalty cases against Petronas, had surprised Tun (Mahathir).”

Thomas, a Christian who was the first member of Malaysia’s ethnic Indian minority to be appointed attorney general, was referring to a public statement drawing support from the Pan-Malaysian Islamic Party (PAS).

In an interview with Free Malaysia Today on Friday, Mahathir expressed regret over naming Thomas to his cabinet.

“But I was prepared to defend him, but had I known this would have happened, I would have elected somebody else,” Mahathir said. “But at the time, I thought it would be a new experience, we have an AG who is professional, I thought he was.”

Publisher Gerakbudaya announced the book’s launch on Jan. 26, and described Thomas’ work as a candid memoir that “is the first insider’s account by a senior Pakatan Harapan official on the achievements, disappointments, and failures of the administration.”

The publisher has since posted notices on its Facebook page announcing the book had sold out but that additional copies were being printed to meet demands.

When contacted by BenarNews, Chong Ton Sin, the publishing house’s founder, said authorities had summoned him to federal police headquarters on Friday and recorded a statement from him, a day after authorities visited Gerakbudaya’s book store.

“I had my statement taken earlier. The Home Ministry also came to purchase one of the books yesterday,” Chong told BenarNews.

Meanwhile, the Shah Alam High Court in Selangor on Friday approved allowing lawyers to initiate a contempt proceeding against Thomas.

This came after lead defense counsel Shafee Abdullah informed the court that Thomas had touched on concerns about evidence against a women who is stranding trial on murder charges for the death of her husband, Cradle Fund CEO Nazrin Hassan. Two boys whose identities cannot be revealed because of their ages were charged as well.

According to allegations by defense team member Rahmat Hazlan, Thomas wrote that evidence in the case was not credible.

“We are saying that it is an ongoing trial and it is something for the court to determine whether evidence is to be believed, whether it is credible or not,” Rahmat told BenarNews.

He said the judge suggested that the prosecution initiate a contempt proceeding against Thomas, and deputy public prosecutors asked for time to seek instruction from the Attorney General’s Chambers.

Rahmat said the defense would initiate action if the prosecution passes.

Thomas also wrote about Najib, the former prime minister whom he prosecuted on charges linked to 1Malaysia Development Berhad.

Najib established 1MDB in 2009 when he was prime minister and finance minister ostensibly to benefit the Malaysian people. He is now appealing his July 2020 conviction on charges that he illegally received 42 million ringgit (U.S. $9.67 million) from a 1MDB subsidiary.

Malaysian and U.S. prosecutors allege that at least $4.5 billion (18.8 billion ringgit) was stolen from 1MDB and diverted through acquisitions of real estate, artwork and luxury properties by Najib and his associates.

In his book, Thomas touched on the case of Mongolian model Altantuya Shaariibuu, particularly on the accusation by one of her convicted killers alleging that Najib had personally ordered her killing, according to local media. The killers were members of Najib’s security detail when he served as defense minister.

Najib’s lawyers on Tuesday sent a legal letter to Thomas, saying his allegations were “totally untrue” and defamatory. The letter demanded Thomas make a public retraction and publish an apology in Malaysian media. Najib’s lawyers also demanded that Thomas pay 10 million ringgit (U.S. $2.45 million) in damages for the injury to his reputation.

Lawyer Farhan Shafee, who represents Najib, told BenarNews that Thomas had replied to the letter.

“I am informed he has replied denying that he has committed defamation, so we will take the necessary steps,” Farhan said.

Najib himself took to Facebook on Friday to condemn Thomas for making allegations against his late father, Abdul Razak Hussein, another former prime minister, over race riots in 1969. Thomas alleged that an attempted coup staged by Abdul Razak, then the country’s deputy premier, led to the riot.

“It is way too much for him to touch on someone who is no longer here, who cannot defend himself and it was immoral. He did not even provide any evidence,” Najib said, adding that he believes more people Thomas wrote about might take legal action.