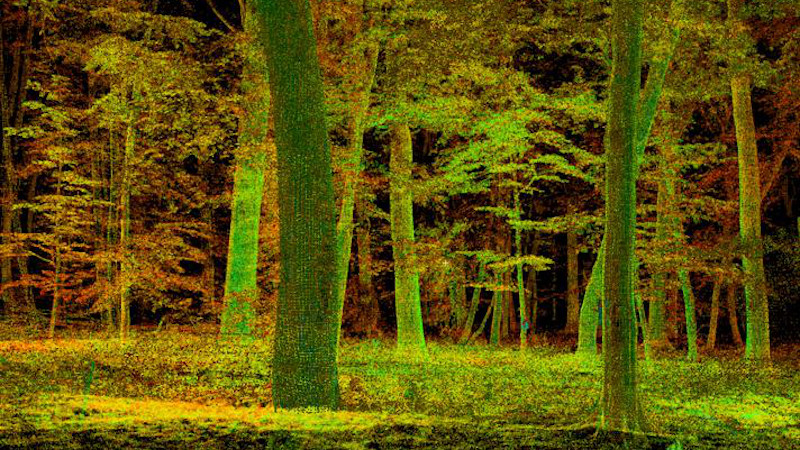 Primeval forests are of great importance for biodiversity and global carbon and water cycling. The three-dimensional structure of forests plays an important role here because it influences processes of gas and energy exchange with the atmosphere, whilst also providing habitats for numerous species.

An international research team led by the University of Göttingen has investigated the variety of different complex structures that can be found in the world’s forests, as well as the factors that explain this diversity. The results have been published in Nature Communications.

The researchers investigated the structure of primeval forests on several continents in different climate zones. To achieve this, they spent two years travelling to remote primeval forest areas around the world to record the structure of the forests with the help of 3D laser scanners. A laser scanner captures the environment with the help of a laser beam and thus builds a 3D representation of the forest. This allows important metrics to be calculated to describe the structure. They found that the global variability of forest structures can be explained to a large extent by the amount of precipitation and thus by the availability of water in the different ecosystems.

Based on these findings and with the help of climate data, they were able to create maps of the world’s forests showing the global variability of structural complexity.

The world maps describe the structures that forests can develop free from human influence. Only 30 percent of the world’s forests are still primeval forests.

“A long-term goal of our research is to better understand how human influence and climate change affect the forest, its structure and the processes linked to it. The structure of primeval forests is an important reference point for this,” says first author Dr Martin Ehbrecht from the University of Göttingen.

A particular focus here is the question of how changes in precipitation patterns due to climate change affect the structure of forests.

“The importance of water for the formation of complex forest structures can be explained by various interacting mechanisms,” says Ehbrecht. “The availability of water is an important driver of the diversity of tree species. The more tree species a forest holds, the more pronounced is the coexistence of different crown shapes and sizes of trees. This means that the space available for the crowns of trees can often be utilised more efficiently in species-rich forests, which makes the forest structure more complex.”

“Nevertheless, forests with high structural complexity can also be found in temperate zones, such as in areas with a high rainfall like the Pacific Northwest of the USA or in coastal forests of Chile,” says Professor Ammer, senior author of the study and head of Silviculture and Forest Ecology of Temperate Zones at Göttingen University.

The results of this study are an important starting point for further work. “With the help of satellite-based recording of 3-D forest structure, in the future it will be possible to precisely record the actual complexity of forests,” says Ehbrecht. “This will make it possible to better understand the effects of forest management and climate change on the world’s forests. Our world maps can serve as an important reference for this.”

The article Forests Of The World In 3D appeared first on Eurasia Review.