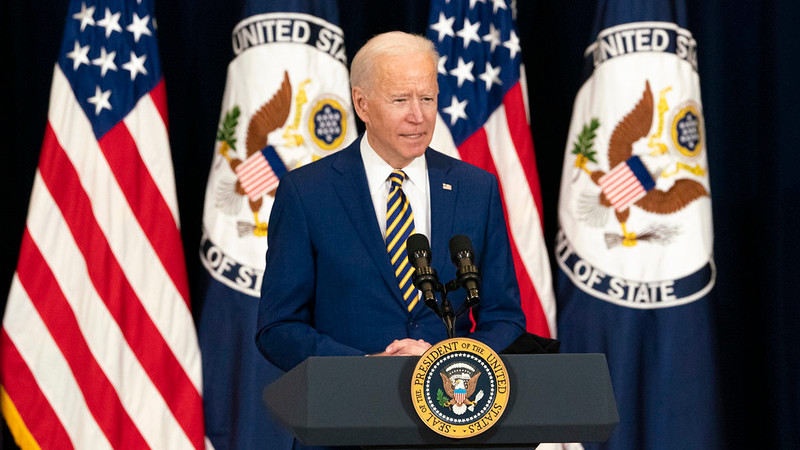 “We are united in our resolve. There can be no doubt in a democracy, force should never seek to overrule the will of the people or attempt to erase the outcome of a credible election.”

That admirable principle was articulated by President Joe Biden in a February 3 speech at the Department of State. He was speaking about the recent violent coup in Myanmar. As Biden continued his commentary he asserted firmly, “We will work with our partners to support the restoration of democracy and rule of law and impose consequences on those responsible.”

In espousing those principles, however, Biden has in effect condemned past actions of former president Barack Obama. The Biden commentary speaks perfectly to what happened in 2014 Ukraine under Obama.

Victor Yanukovych had been elected president in 2010. The credibility of his election was attested to by the president of the Organization for Security and Cooperation in Europe’s parliamentary assembly. He called it “an impressive display of democratic elections.” Official election monitors agreed.

It’s true that Yanukovych’s popularity rating slipped 18 points during his presidency. His predecessors suffered greater losses in public trust. Even Obama lost 11 points during his term. But that didn’t precipitate a coup to throw him out.

Ukraine had a democracy. But then force was used to overrule the will of the people. The outcome of a credible election was erased. That’s the kind of scenario that Biden denounced on principle in his remarks.

This leaves Biden in a predicament. The Obama administration not only favored that transgression in Ukraine, it played an active role in it.

The result is that a violent coup displaced Ukraine’s democratically elected president, threw out the democratically promulgated constitution, and never gained control over parts of the territory. Ukraine was no longer whole. The coup in effect destroyed the territorial integrity and sovereignty of the former Ukraine. It was left broken and fragmented.

That is a very different description of what happened from what you likely saw in news reports back then. We were fed a wholly made up version of events, that of a Russian invasion and a motive to take over all Ukraine. That version successfully covered up the culpability of the Obama administration in the disaster created by the coup.

The Obama version about Ukraine is about as credible as the Bush story about Saddam’s weapons of mass destruction. Both were crafty fabrications. Both resulted in colossal disasters.

What is it that Obama actually did against Ukraine’s democracy?

He used key players on the ground to incite unrest. They are Victoria Nuland, Geoffrey Pyatt, and Chris Murphy.

Senator Murphy showed up in December, 2013. He stood on the stage of the Maidan rally to whip up unrest among the throngs that stood before him.

The crowd had gathered merely to express support for a trade deal with the EU. But Murphy carried with him Obama’s hidden agenda.

At a news conference he said, “The United States stands ready to support the Ukrainian government if they’re willing to make that change and take the step towards Europe.”

Notice Murphy’s “if.” It was actually a threat. What would it mean if the US chose not to support the Ukrainian government?

A couple of months later we found out, and it wasn’t pretty. That’s because Ukraine’s democratic government did chose not to favor the US-pushed trade deal. That turned out to be a fatal decision.

This is when Nuland and Pyatt went into action. Nuland was a State Department official. Pyatt was Washington’s ambassador to Ukraine. They conspired to pick replacements for Ukraine’s democratic leaders. An intercepted phone call emerged between the two plotting away. Clearly they had no qualms about nullifying the results of a credible election.

They were talking about people, some of whom had strutted about wearing Nazi symbols. Also there were people with a background in anti-Semitism. And they were people willing to use force.

Earlier I compared Obama’s fabricated story with Bush’s deception about Iraq. But when it came to casualties, Bush’s Iraq adventure was far worse. Some estimate that well over 100,000 Iraqis died as a result.

Deaths in Ukraine were only around 13,000, although the dying is not over yet.

The Ukraine casualties result from the break-up of the former Ukraine. The people of eastern Ukraine and those on Crimea wanted no part of the US-incited coup and the hostile leaders it placed in Kyiv. The coup leaders never had control of these regions. And the people there wanted to keep it that way.

That led coup forces to brutally attack areas in eastern Ukraine. A war ensued. That’s what to date has consumed reportedly 13,000 lives. Crimea avoided bloodshed by seeking refuge in Russia. Residents voted for reincorporation into Russia from whence it came during the 1950s.

You’ve probably heard an opposing explanation — that Russia invaded and annexed Crimea. But no one has ever shown evidence that it happened. It’s another “Saddam’s WMD” type of story. My book Ukraine in the Crosshairs provides a greater perspective on what was done to Ukraine.

The Russians are not without fault in the Ukraine saga, however. Amid all the wild stories about their evil intent toward Ukraine, the Kremlin did absolutely nothing to successfully set the record straight for the world. Had it dealt with the fabricated stories with even a modicum of strategic sense it could have headed off a lot of trouble and saved many lives.

So where does this leave Biden now in 2021, having just put forth some excellent principles about the protection of democratic choices while advocating consequences for those who violate those principles?

What consequences should Obama face? What about Nuland, Pyatt, and Murphy? Certainly this quad has on their hands the destruction of the old Ukraine and the blood of 13,000 people. The quad needs to be dealt with accordingly

An open question in all this is why in the world Obama did what he did to Ukraine. What was his motive?

Biden has a principle that he’s expressed about motives. He incorporated it into his farewell speech to the Senate. It was advice he received from then Senator Mike Mansfield. According to Biden he said, “Joe, never question another man’s motive. Question his judgment but never his motive.”

A similar quote is attributed to President Dwight Eisenhower: “Never question another man’s motive. His wisdom, yes, but not his motives.”

The article Biden Condemns Obama’s Past Use Of Force Against Democracy – OpEd appeared first on Eurasia Review.