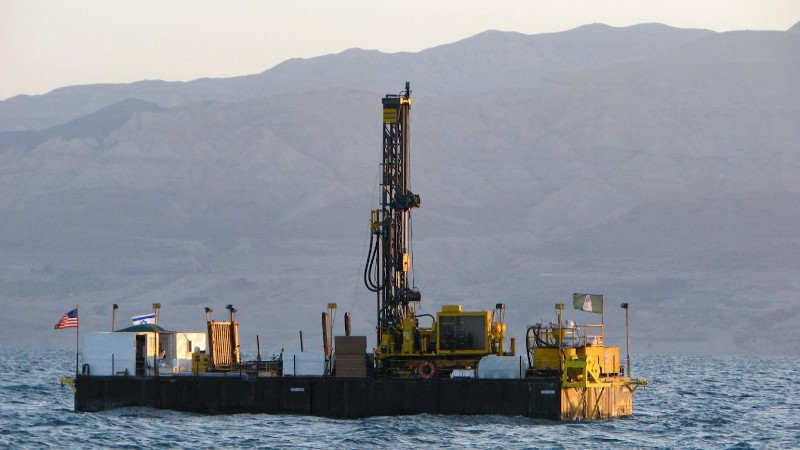 A first-of-its-kind study conducted under the bed of the Dead Sea reveals that a devastating earthquake measuring 6.5 on the Richter scale is expected to hit our region in the coming years. The study showed that an earthquake of this magnitude occurs in the land of Israel on an average cycle of between 130 and 150 years, but there have been cases in history where the lull between one earthquake and another was only a few decades long.

The last earthquake with a magnitude of 6.5 on the Richter scale was felt in the Dead Sea valley in 1927, when hundreds of people were injured in Amman, Jerusalem, Bethlehem and even Jaffa. Now, in the wake of the findings of the study, the researchers are warning that another earthquake is very likely to occur in our lifetime, in the coming years or decades.

As part of the study, the research was carried out under the auspices of the International Continental Scientific Drilling Program (ICDP), which conducts deep drilling in lakebeds all over the world with the aim of studying Earth’s ancient climate and other environmental changes. In 2010, a rig was placed in the center of the Dead Sea and began drilling to a depth of hundreds of meters, enabling an analysis of some 220,000 years of Dead Sea geology.

According to Prof. Marco, because the Dead Sea is the lowest place on earth, every winter, the flood waters that flow into the Dead Sea carry with them sediment which accumulates at the bottom of the lake into different layers. A dark layer of about one millimeter represents the winter flash-flood sediment and a lighter layer, also about a millimeter thick, represents the increased evaporation of water during the summer months, with every two layers representing a different year.

As soon an earthquake occurs, the sediments swirl together, with the layers that had previously settled in perfect sequence blending into one another and resettling in a different arrangement. Using equations and computational models that the researchers developed specifically for this study, they were able to understand the physics of the process and reconstruct from the geological record the history of earthquakes over time.

If until now researchers thought that the Dead Sea rift trembled at a magnitude of 7.5 or higher on the Richter scale every 10,000 years on average, it now appears that such destructive earthquakes are much more frequent, with an average cycle ranging from 1,300 to 1,400 years. The researchers estimate that the last earthquake of this magnitude struck the region in 1,033 – that is, almost a thousand years ago. This means that in the next few centuries, we can expect another earthquake of a magnitude of 7.5 or higher.

In contrast, the researchers found that earthquakes with a magnitude of 6.5 occur in the region every 130 to 150 years on average, but that the frequency between earthquakes varies; while there were cases in which the lapse between one earthquake and another lasted hundreds of years, there were also cases in which powerful earthquakes occurred within only a few decades of each other.

“I don’t want to cause alarm,” concludes Prof. Marco, “but we are living in a tectonically active period. The geological record does not lie and a major earthquake in Israel will come. Of course, we have no way of predicting exactly when the earth will shake under our feet – this is a statistical projection – but unfortunately, I can say that an earthquake that will cause hundreds of casualties will hit in the coming years. It could be in ten years or in several decades, but it could also be next week, and we need to constantly be prepared for that.”

The article Israel Can Expect Major Earthquake Of 6.5 On Richter Scale In Coming Years appeared first on Eurasia Review.