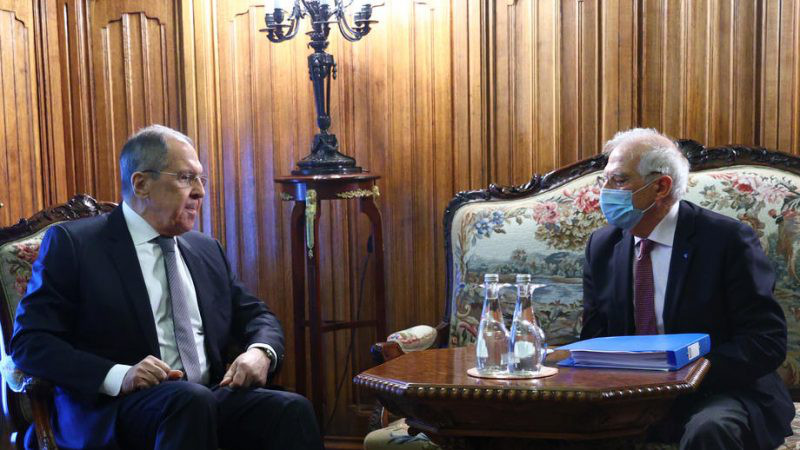 (EurActiv) — On his trip to Moscow, EU’s chief diplomat Joseph Borrell on Friday (5 February) told his hosts that their treatment of jailed opposition leader Alexei Navalny represented ‘a low point’ in ties, as his case had added a new irritant to the strained relations between Russia and the West.

In response, his Russian counterpart Sergei Lavrov said the EU was “an unreliable partner” and was acting more and more “like the United States”.

In Brussels, the expectation for the controversial diplomatic visit had been low. Not all EU countries were supportive of the visit.

To add insult to injury, Borrell’s visit was overshadowed by what some critics called provocative choreography, as Navalny appeared in a glass cage in a Moscow courtroom answering new charges, being accused of slandering a World War Two veteran who took part in a promotional video backing reforms last year that let Putin run for two more terms in the Kremlin after 2024 if he wants.

Navalny had then tweeted that the celebrities and 94-year-old war veteran Ignat Artemenko, who appeared in the pro-Putin video were “a disgrace to the country, people without conscience – traitors”.

World War II veterans are idealised in Russia as heroes and saviours of the nation.

“This case, in general, was intended as a kind of PR process because the Kremlin needs the headlines: Navalny slandered a veteran,” he told the court. “I find it really disgusting and unbearable… You’ve been using him (the veteran) as a puppet… you’re making a mockery of a 95-year-old man.”

Though the charge is currently punishable by up to two years in jail, his lawyers say he cannot face a custodial sentence because the alleged crime was committed before the law was changed to make it a jailable offence.

Speaking to reporters after the meeting, Lavrov said he was ready to engage and complained about the state of EU-Russia ties.

Commenting on the possibility of EU sanctions against Moscow over its treatment of Navalny, Lavrov said “for Russia, the EU is an unreliable partner”.

He added that the question of possible sanctions was an internal matter for the EU, but said Russia had noticed how Brussels was increasingly behaving like the United States and imposing unilateral restrictions on countries.

Lavrov had previously accused the West of hysteria and double standards over the Navalny case.

Despite calls from the Baltic countries, Poland, Italy and Romania, EU foreign ministers in January decided to refrain from the time being from imposing fresh sanctions on Russian officials in response to Navalny’s detention.

The EU has already economic sanctions in place on the Russian energy, financial and arms sectors over its 2014 annexation of the Crimean peninsula and had sanctioned six Russian officials close to President Vladimir Putin in response to Navalny’s poisoning last summer.

However, EU leaders are expected to discuss further steps at a planned summit on 25-26 March, where Russia ties will be on the agenda.

After joint talks, Borrell and his Russian counterpart Lavrov reaffirmed that Brussels and Moscow wanted to continue working together despite differences.

Speaking after the meeting, Borrell said the discussions had been “frank and open” but “intense” as “certainly our relations are under severe strain and the Navalny case is a low point”, as he met his Russian counterpart.

“While we fully respect Russian sovereignty… the EU considers issues related to the rule of law, human rights, civil society and political freedom are central to our common future,” he said.

According to Borrell, EU-Russia relations would be marked by “fundamental difference and lack of trust”, with both sides seeing each other as “a competitor and a rival rather than a partner”.

Both diplomats, however, said during talks in Moscow that Brussels and Moscow wanted to continue working together despite differences.

“There are issues in which we can and must work together,” Borrell told reporters, who said that, “both sides have confirmed their interest in maintaining and expanding channels of dialogue, including on issues on which our positions differ.”

Before his departure, Borrell had said he planned to use the visit to meet with representatives of the civil society. His program, which hasn’t ended, is still unclear.

An EU spokesperson, commenting on Borrell not meeting Navalny, told reporters in Brussels  Borrell would not meet Navalny in prison, not even trying to, because “it would send the wrong signal” and give the impression the EU is supporting his sentence.

“Navalny should not be in prison”, she added.

EU lawmakers largely condemned the visit as ill-timed and inappropriate, too.

The European Parliament is expecting Borrell for a post-visit briefing at their plenary session next week on Tuesday.