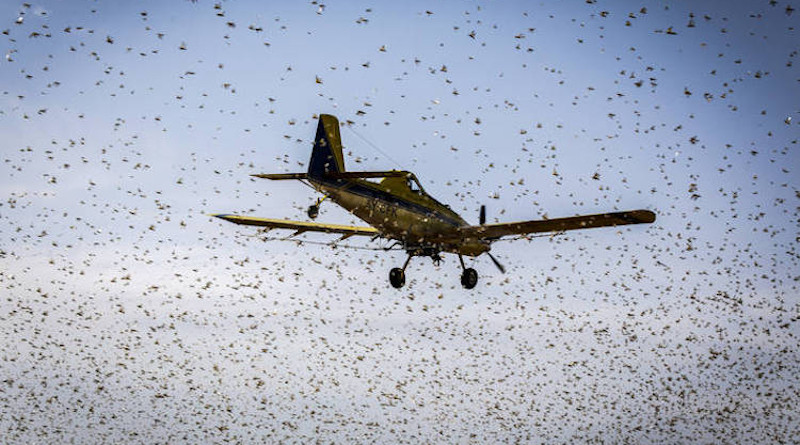 Despite its best efforts throughout 2020 to bring the scourge of desert locusts under control, the UN Food and Agriculture Organization (FAO) warns that swarms of the crop-eating insects now pose an even greater threat to agricultural and pastoral livelihoods and the food security of millions from the Horn of Africa to Yemen.

Last month, FAO said favorable weather conditions and widespread seasonal rains had led to an explosion in locust breeding in eastern Ethiopia and Somalia — made worse by Cyclone Gati. Infestations are forecast to increase in the coming months alongside a new cycle of breeding on the Red Sea coast.

“A one square kilometer-swarm can consume the same amount of food in one day as 35,000 people.”

Although Saudi Arabia has fought to contain desert locusts for decades, FAO says the impending swarms pose a far greater threat to the Kingdom, Eritrea, Sudan and Yemen than those seen previously.

The Saudi government is taking precautions thanks to a well-established national program and the work of the Ministry of Environment, Water and Agriculture’s Locusts and Migratory Pests Control Center, based in Jeddah.

“Well-trained national experts, in collaboration with agriculture offices throughout the country, constantly monitor the situation by carrying out ground surveys and apply control measures by ground and air when required,” Cressman said.

“Desert locusts are omnivorous — they eat everything, starting with the natural vegetation in the desert that becomes green after rain, followed by rain-fed agriculture on the fringes of the desert, then irrigated agriculture. They can also attack date palms.”

Locust swarms form when their population increases and they become crowded together. They then switch from a solitary to a social phase, quickly multiplying 20-fold in a span of just three months, when they can reach densities of 80 million per square kilometer.

When they affect several countries simultaneously in large numbers, they are classified as a plague.

Last summer, the Saudi government deployed 40 field teams to fight desert locusts in high-risk areas south of Riyadh, in the southeast of Asir, the hinterlands of Najran, the eastern desert, and the eastern Taif highlands of the Makkah region.

Their mission was to prevent a swarm spreading out from Yemen, Oman and the Empty Quarter through adoption of measures to reduce breeding.

That summer, abnormally heavy rainfall in the southern Arabian Peninsula coincided with the summer migration of locust swarms from East Africa toward southwest Asia, India and Pakistan.

“The locust hatching and swarming cycle has been happening with disastrous effect since before biblical times,” Jeffrey Culpepper, chairman of UAE-based Agrisecura, which provides sustainable solutions for food security purposes, told Arab News.

“Some swarms are worse than others due to the level of rain prior to the hatch. This cycle will be bad. Very bad.”

Culpepper says outdoor regional crop production is already suffering due to climate change — and the locust swarms are making matters worse. He expects the GCC countries will come off lightly due to their minimal external crop production. But others will not be so lucky.

“The public green spaces, especially gardens and golf courses, will be hit hard because the locusts will eat everything in sight overnight,” Culpepper said. “Poorer regional neighbors like Egypt, Sudan, Ethiopia and Turkey, who have access to river irrigation for external crops, mainly grains, will be hit hard, and countries like Yemen, Somalia and Eritrea, already suffering from internal strife, will suffer even more.”

Due to Saudi Arabia’s relative dryness, Culpepper says the Kingdom is not usually badly affected. “Locusts prefer softer green matter, but when hungry will eat anything, including young date palm plants,” he said.

“The external wheat circles and silage (a type of fodder) projects that still exist will be harmed. Due to water constraints, wheat and silage projects have been declining in the last few years, so we can expect to see some brown football pitches and public planted spaces.”

FAO is assisting governments and its partners with surveillance and coordination, technical advice and the procurement of supplies and equipment to fight the swarms. At the same time, it has said operations must be scaled up to safeguard food production and prevent further food insecurity in the affected countries.

To date, almost $200 million has been spent on control efforts, allowing the FAO and governments to rapidly expand their locust-response capacity.

“Over 1,500 ground survey and control personnel have been trained and 110 vehicle-mounted ground sprayers and 20 aircraft are now in action,” the UN agency said.

“FAO is now seeking a further $40 million to increase surveillance and control activities in the most affected countries — Ethiopia, Kenya, Somalia, Sudan and Yemen — in 2021. More than 35 million people are already acutely food insecure in these five countries and FAO estimates this number could increase by another 3.5 million if nothing is done to control the latest outbreak.”

Although Saudi Arabia has dedicated funds to the effort, more is needed from other donors to avoid a slowdown in locust-control efforts.

Going forward, the challenges are many. Climate change is impacting locust breeding, migration and invasion. COVID-19’s disruption to supply chains has also made it difficult for some countries to obtain pesticides.

The irregularity of the outbreaks, together with the costs and logistical hurdles associated with regular monitoring in remote areas like eastern Saudi Arabia’ Empty Quarter, makes it hard for governments to prepare and respond.

“Another issue is staff that often change jobs. Training is a constant requirement,” Cressman said. “There are also budgetary constraints when governments may have other priorities, especially in years when the desert locusts are calm.”

This is where new technologies can step in to ensure timely reporting of high-quality and accurate field data, used for analyzing and forecasting, as well as during control campaigns.

“Since its establishment in the 1950s, FAO’s DLIS has been providing early warning and forecasts of swarm invasions to all countries, which are key to preventing their plagues,” Cressman said.

“FAO works with countries at risk to strengthen their capacity to monitor and control locusts. During emergencies such as now, FAO has mobilized financial resources with international donors and provided technical expertise in coordinating and implementing control campaigns.”

Culpepper has witnessed firsthand the devastating impact of locust swarms while working in western and central Africa. “There is an old saying that ‘famine is the handmaiden of locusts,’” he said.

“For years, groups like the UN have been experimenting with various locust-control projects with minimal results due to the magnitude of the problem. Yet it’s getting less attention because it is predominantly a Third World problem. Extensive pesticide spraying and crop rotations have not worked.”