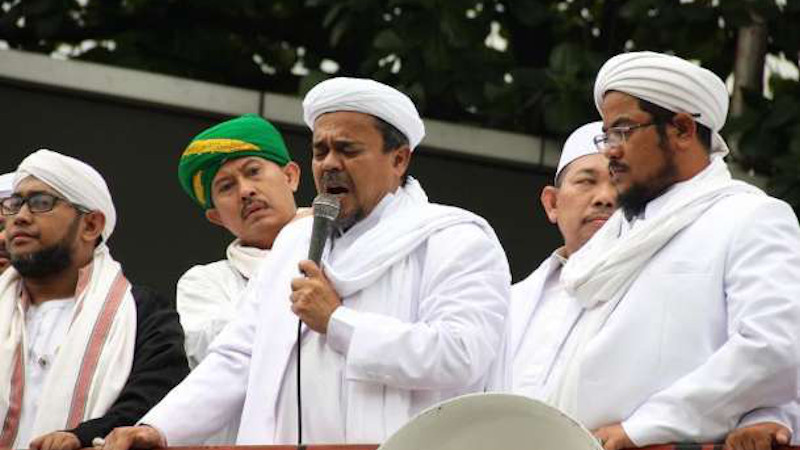 Firebrand and head of the Islamic Defenders Front (FPI) Muhamad Rizieq returned to Indonesia from his exile in Saudi Arabia on 10 November 2020. To show off his political clout, his return was greeted by a throng of supporters who have since held half a dozen large crowded events. His return has raised concerns that his command over many loyal followers will embolden radicals to launch a self-proclaimed ‘moral revolution’ in Indonesia.

President Joko ‘Jokowi’ Widodo responded by demanding security authorities ‘take firm action’ against anyone violating COVID-19 guidelines. His instruction led the National Police to sack the police chiefs of West Java and Jakarta for failing to stop Rizieq from breaking health protocols. The police then decided to act, summoning Rizieq for questioning over breaches of health protocols. Rizieq’s refusal to answer the summons led to violent clashes between the police and his supporters and left six FPI members acting as his guards dead. The government disbanded the FPI on 30 December 2020, citing their members’ involvement in terrorism and criminal acts.

The killings raised concerns of further escalations and more violence, especially considering the FPI’s track record of harassment, intimidation, threats and mob violence against religious minorities. But these concerns may not be warranted.

The FPI was able to commit violence against minorities due to its perceived immunity from the law. Thanks to Rizieq’s large following and strong connections with politicians and some sections of the police and the military, police and government have always treated the FPI’s vigilantism lightly. Rather than trying to deal with the problems caused by the group’s vigilantism head on, the police had sought to try to prevent a much larger conflict from erupting by accommodating Rizieq and his group.

The police fear that they may offend Muslims or cause more conflict down the road if they take a harsher approach. This gave the FPI carte blanche to act with tacit permission for their vigilantism. In some cases, the FPI justified its actions by declaring that the police asked for their help to eradicate the violence.

The police were far more interested in maintaining order than in upholding the law. Many of the FPI’s critics decried the group’s seeming impunity and the police’s impotence. By cracking down on the FPI, police erased the tacit permission that the FPI presumed they had from the police and the government to fight vices and attack people who they claimed belonged to deviant sects.

But shutting down the FPI does not mean that minority rights are now protected. Witness the backlash from various groups, including the influential Indonesian Ulema Council, when newly appointed Minister of Religion Yaqut Cholil Qoumas declared that the government would uphold the rights of Ahmadiyah and Shiite religious groups. Qoumas was forced to clarify his statement by declaring that he would protect them as citizens, not as religious groups. Intolerance toward minorities, notably the Ahmadiyah, has support even among mainstream Muslim groups, such as the Muhammadiyah. Even followers of the Nahdlatul Ulama — recognised as a defender of religious tolerance and pluralism — are ‘generally as intolerant of religious minorities as the rest of the Indonesian Muslim population’.

The police crackdown on the FPI will not significantly impact the treatment of minorities in Indonesia. The police only acted because Rizieq and the FPI ignored health protocols and undermined public trust in the government, not because of vigilantism. The arrest of Rizieq and disbandment of the FPI are political issues, and are not about protecting religious minorities. Anyone who thinks these events signal Indonesia’s new commitment to protecting minority rights is bound to be disappointed.

*About the author: Yohanes Sulaiman is a lecturer in the School of Government at the Universitas Jenderal Achmad Yani, Bandung.