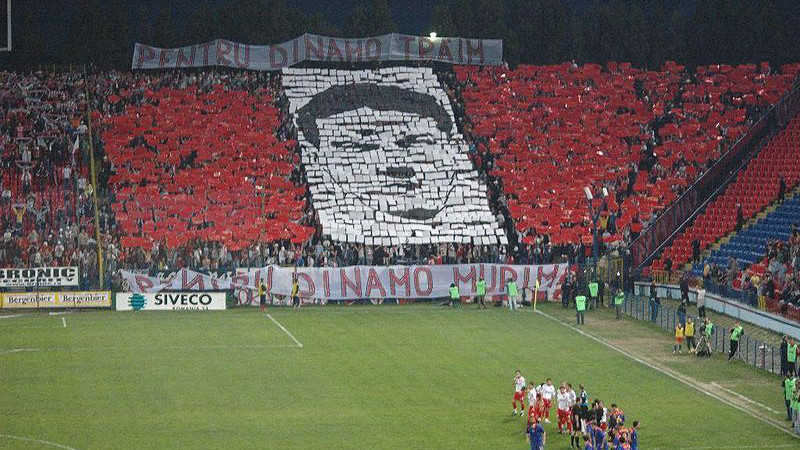 Once a contender on the European stage, Dinamo Bucharest has fallen on hard times. Now thousands of fans are buying tickets for games they cannot watch, just to keep the club afloat.

When would you buy a ticket to a football match you know you cannot attend?

To fans of Dinamo Bucharest, the answer is obvious: when the club’s very existence is on the line.

The world over, the empty terraces of the COVID-19 era have brought many football clubs to the brink of financial collapse. Dinamo, already indebted, is among them.

Yet the 72 year-old Romanian giant, winner of 18 domestic league titles, is selling more tickets now than it sometimes did before the pandemic struck, thanks to a novel initiative by an association of supporters called Doar [‘Just’] Dinamo Bucuresti, or DDB.

None of the ‘ticketholders’ can attend the games, but the supporters hope the money pouring in will help prevent a player exodus. The players are threatening a strike in January over unpaid wages, following years of mounting debts and unmet promises by investors who took over in the summer.

“So far, DDB has kept the club alive with the socios’ contributions, donations, auctions of historic t-shirts and virtual game tickets sold during the pandemic,” Robert Thomas, a Dinamo fan and volunteer spokesman for the association, said, referring to DDB members known by the Spanish term ‘socios’.

“The last five home games have been sold out,” he told BIRN.

Once a force to be reckoned with on the European stage, the likes of Dinamo and its fierce rival Steaua have fallen on hard times, performances on the pitch hurt by corruption in the boardroom and apathy in the stands.

A ban on spectators to combat the spread of the novel coronavirus has made watching a Romanian league match on television an even gloomier experience, and left a deeper hole in already depleted club coffers.

Yet for an away game on December 20 against Academia Clinceni, DDB sold 14,000 tickets via an events website on which some supporters even paid for beer and hotdogs they knew they would never consume. The tickets cost one euro, less than the three to five euros for actual tickets to a game. Dinamo’s Stefan cel Mare stadium holds roughly 14,000 seats.

Thanks to such sales, and more conventional fundraising, DDB recently paid more than 200,000 euros into Dinamo’s account.

The initiative has taken on even greater urgency since the departure of coach Cosmin Contra and two Spanish players in December over unpaid salaries since the club was bought out in August. Players and staff have told Romanian media they will go on strike if they are not paid by January 3.

DBB has declared “war” on the owner, a Luxembourg-registered investment fund represented by Spanish businessman Pablo Cortacero, who became president of Dinamo.

Dinamo’s management and financial problems predate Cortacero’s arrival but reached a climax in the spring of 2020 when the club faced being ejected from the top division for the first time in its 72 year history over an unpaid licence.

DDB came to the rescue with money raised selling symbolic tickets for virtual Dinamo fixtures played on the popular EA Sports video game FIFA. Since its inception in 2018, DDB has contributed some 800,000 euros to Dinamo coffers, taking a 20 per cent stake in the club in return. The association now boasts more than 12,000 members, a huge number for the region.

Then in August this year, for a symbolic sum of one Romanian leu, or 20 euro cents, Benel International SA bought a majority stake in the club, promising to invest millions of euros to clear Dinamo’s debts and secure salaries.

Four months on, salaries are still frozen. ‘La proxima semana’, Spanish for ‘next week’, has become a popular refrain among Dinamo fans tired of being told the investment is on its way.

Contacted by BIRN, Cortacero – who was removed from the post of president in November but remains on the board of directors – said that a five-million-euro capital injection agreed at a December 21 shareholder meeting was “already underway”.

The money would arrive “in the coming days”, he said, making possible salary payments for players and other Dinamo staff. He said Benel International had already spent one million euros to cover the most urgent debts.

“There have been financial issues with the investment group, and there’s also been chaos due to the pandemic,” Cortacero said by phone. “These combined circumstances have led to some delays, but there is no problem and the capital increase has already happened.”

Dinamo’s supporters, however, will only believe it when they see it.

Tempers were running high at the shareholder meeting in December, at which DDB was represented. DDB accused Cortacero’s bodyguards of harassing their representatives and hitting one of them. Cortacero said security guards were simply responding to threatening behaviour by some Dinamo fans.

Just as hopes soared when Cortacero took over, there has been a deep sense of disappointment since.

Moving quickly, Cortacero and his team manager, fellow Spaniard Rufo Collado, made a handful of signings, including a number of Spanish free-agents, beaming in enthusiasm at their unveiling.

“The fact that they brought in players that Dinamo or any other Romanian team could only dream about was a sign that they were not just charlatans,” said Emanuel Rosu, a leading Romanian football correspondent with nearly 20,000 followers on Twitter.

Yet in early December, two new signings, Isma López and Borja Valle, invoked a FIFA clause that allows players to leave their clubs if they have not been paid for 75 consecutive days. They returned to Spain and unleashed a volley of accusations against the Dinamo management.

“Since I arrived in September, the management hasn’t transferred a single euro to my account,” López said in an Instagram video. “It has been a time of lies,” he said, describing training sessions held without a team doctor or physiotherapist.

Speaking through his agent on Instagram, Valle said: “I can’t understand how there are people who can play with the hopes of others, make them change their lives and take them far away from their country to deceive them and not honour anything.”

Rosu, the football correspondent, said the delays to much-needed funds “completely discredits” Dinamo’s new owners. “From what we’ve seen so far, this all looks like one big deception,” he said.

The article In Bucharest, Fans Of Indebted Football Giant Pay Not To Watch – Analysis appeared first on Eurasia Review.