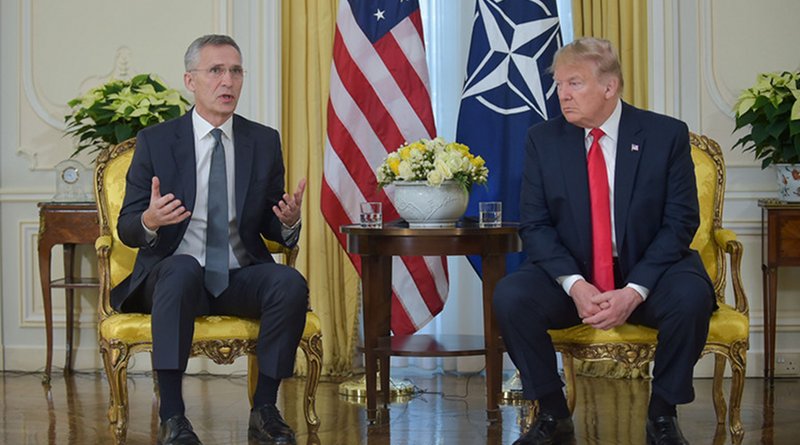 Michael Crowley reported for the New York Times [1] Thursday, September 3, that American allies and former US Officials fear Trump could seek NATO exit in a second term. According to the report, “This summer, Mr. Trump’s former national security adviser John R. Bolton published a book that described the president as repeatedly saying he wanted to quit the NATO alliance. Last month, Mr. Bolton speculated to a Spanish newspaper that Mr. Trump might even spring an ‘October surprise’ shortly before the election by declaring his intention to leave the alliance in a second term.”

The report adds, “In a book published this week, Michael S. Schmidt, a New York Times reporter, wrote that Mr. Trump’s former chief of staff John F. Kelly, a retired four-star Marine general, told others that ‘one of the most difficult tasks he faced with Trump was trying to stop him from pulling out of NATO.’ One person who has heard Mr. Kelly speak in private settings confirmed that he had made such remarks.”

In July, the Trump administration announced plans to withdraw 12,000 American troops from Germany and sought to cut funding for the Pentagon’s European Deterrence Initiative, though the main factor that prompted Trump to pull out American forces from Germany was German Chancellor Angela Merkel’s refusal to attend G-7 summit in person due to coronavirus outbreak. The summit was scheduled to be held at Camp David on June 10 but was cancelled. About half of the troops withdrawn from Germany were re-deployed in Europe, mainly in Italy and Poland, and the rest returned to the US.

Historically, the NATO military alliance at least ostensibly was conceived as a defensive alliance in 1949 during the Cold War in order to offset conventional warfare superiority of the former Soviet Union. The US forged collective defense pact with the Western European nations after the Soviet Union reached the threshold to build its first atomic bomb in 1949 and achieved nuclear parity with the US.

But the trans-Atlantic military alliance has outlived its purpose following the dissolution of the Soviet Union in 1991 and is now being used as an aggressive and expansionist military alliance meant to browbeat and coerce the former Soviet clients, the Central and Eastern European states, to join NATO and its corollary economic alliance, the European Union, or be internationally isolated. If not Washington, the Europeans themselves should have abandoned the redundant militarist organization long ago.

Although Donald Trump keeps complaining that NATO must share the cost of deployment of the US troops, particularly in Europe where 47,000 American troops were stationed in Germany since the end of the Second World War and before the withdrawal of 12,000 US forces in July, 15,000 American troops were deployed in Italy and 8,000 in the United Kingdom, fact of the matter is that the cost is already shared between Washington and host countries.

Whereas the oil-rich Gulf Cooperation Countries (GCC) – Saudi Arabia, UAE, Kuwait, Bahrain and Qatar – pay two-third of the cost for maintaining 36,000 US troops in the Persian Gulf where more than half of world’s 1,477 billion barrels proven oil reserves are located, and Washington contributes the remaining one-third.

Besides withdrawing 12,000 troops from Germany, the Trump administration has also pledged to scale down American troop presence in Afghanistan after reaching a peace deal with the Taliban on February 29. The United States currently has about 8,600 troops in Afghanistan, and plans to cut its troop levels in Afghanistan to “a number less than 5,000” by the end of November, Defense Secretary Mark Esper announced in August, before the complete withdrawal of US forces from Afghanistan by April next year, as stipulated by the terms of the peace pact reached with the Taliban at Doha, Qatar.

The number of US troops deployed in Afghanistan did not exceed beyond 30,000 during George Bush’s tenure as the American president, and soon after occupying Afghanistan, Washington invaded Iraq in March 2003 to expropriate its 140 billion barrels proven oil reserves, and American resources and focus shifted to Iraq.

It was the ostensibly “pacifist and noninterventionist” Obama administration that made the Afghanistan conflict the bedrock of its foreign policy in 2009 along with fulfilling then-President Obama’s electoral pledge of withdrawing American forces from Iraq in December 2011, only to be redeployed a couple of years later when the Islamic State overran Mosul and Anbar in Iraq in early 2014.

At the height of the surge of the US troops in Afghanistan in 2010, the American troops numbered around 100,000, with an additional 40,000 troops deployed by the rest of the NATO members, but they still could not manage to have a lasting impact on the relentless Taliban insurgency.

Similarly, the Nobel-laureate President Obama initiated a proxy war in Syria in 2011 to safeguard Israel’s regional security because the Bashar al-Assad government in alliance with Hezbollah in Lebanon constituted single biggest threat to Israel’s northern borders, a fact that became obvious to Israeli military strategists when Hezbollah mounted hundreds of rocket attacks into northern Israel during the 2006 Israel-Lebanon conflict.

After being elected, the Trump administration had to contend with the legacy of its predecessor. But thankfully, the conflict in Syria is gradually winding down. Before the evacuation of 1,000 American troops from northern Syria last year, the Pentagon had 2,000 US forces in Syria. After the drawdown of US troops at Erdogan’s insistence in order for Ankara to mount a ground offensive in northern Syria, the US has still deployed around 1,000 troops, mainly in oil-rich eastern Deir al-Zor province and at al-Tanf military base.

Al-Tanf military base is strategically located in southeastern Syria on the border between Syria, Iraq and Jordan, and it straddles on a critically important Damascus-Baghdad highway, which serves as a lifeline for Damascus. Washington has illegally occupied 55-kilometer area around al-Tanf since 2016, and several hundred US Marines have trained thousands of Syrian militants in the military base battling the Syrian government.

It’s pertinent to note that rather than fighting the Islamic State, the purpose of continued presence of the US forces at al-Tanf military base is to address Israel’s concerns regarding the expansion of Iran’s influence in Iraq, Syria and Lebanon.

Regarding the continued presence of American forces in oil- and natural gas-rich Deir al-Zor governorate, it’s worth pointing out that Syria used to produce roughly 400,000 barrels crude oil per day. Answering questions from Senator Lindsey Graham, Secretary of State Pompeo confessed [3] last month that the State Department had awarded an American company, Delta Crescent Energy, with a contract to begin extracting oil in northeast Syria.

Much like the “scorched earth” battle strategy of medieval warlords – as in the case of the Islamic State which burned crops of local farmers while retreating from its former strongholds in eastern Syria – Washington’s basic purpose in deploying the US forces in oil and natural gas fields of Deir al-Zor governorate is to deny the valuable source of income to Damascus.

Finally, after liberating Mosul and Anbar from the Islamic State in Iraq in July 2017 and Raqqa in Syria in October 2017, the Trump administration has decided [4] to reduce the number of American troops deployed in Iraq from current 5,200 to 3,500 troops in the next three months.

Another reason why Washington can no longer maintain large troop presence in Iraq is that Iran’s Supreme Leader Ayatollah Khamenei has vowed that Iran would not tolerate the presence of American forces in Iraq following the brazen assassination of venerated Iranian General Qassem Soleimani in January, and American military bases in Iraq have come under repeated rocket and missile attacks, particularly in an Iranian missile strike at al-Assad military base in January, scores of American troops suffered concussion injuries and had to be evacuated to Germany for treatment.

[2] What the U.S. Gets for Defending Its Allies and Interests Abroad? http://www.nytimes.com/interactive/2017/01/16/world/trump-military-role-treaties-allies-nato-asia-persian-gulf.html

[4] US to reduce number of troops in Iraq from 5,200 to 3,500 in next three months. https://www.independent.co.uk/news/world/americas/us-politics/us-troops-iraq-pentagon-trump-soldiers-a9694081.html