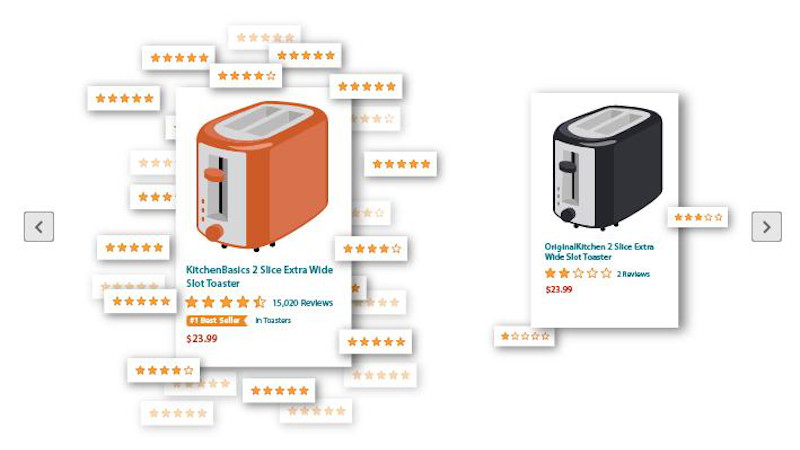 If you’re about to buy something online and its only customer review is negative, you’d probably reconsider the purchase, right? It turns out a product’s first review can have an outsized effect on the item’s future — it can even cause the product to fail.

Shoppers, retailers and manufacturers alike feel the effects of customer reviews. Researchers at the University of Florida’s Warrington College of Business looked at the influence of the first review after noticing the exact same products getting positive reviews on one retailer’s website but negative reviews on others, said Sungsik Park, Ph.D., who studied the phenomenon as a doctoral student at UF.

“Why would a product receive a 4.7-star rating with 100 reviews on Amazon, but only four or five reviews with a two-star rating Walmart or BestBuy?” Park wondered.

To find out, Park — now an assistant professor at the Darla Moore School of Business at the University of South Carolina — teamed up with UF professors Jinhong Xie, Ph.D., and Woochoel Shin, Ph.D., to analyze what might cause the variation. By comparing identical vacuum cleaners, toasters and digital cameras on Amazon and Best Buy, they were able to isolate the first review as the variable in how the product fared. They showed that the first review can affect a product’s overall reviews for up to three years, influencing both the amount and the tone of later reviews.

“The first review has the potential to sway the entire evolution path of online consumer reviews,” Shin said.

How could one review have such a lasting impact? When the first review on a retailer’s site was positive, the product went on to garner a larger number of reviews overall, and they were more likely to be positive. When a product got a negative first review, fewer people were willing to take a chance on buying it, so it had fewer opportunities to receive positive reviews, creating a lingering impact from the first unhappy customer.

“Once you think about how user reviews are generated, it makes sense,” Park said.

The findings, published in the journal Marketing Science, suggest that retailers and manufacturers should take steps to detect negative first reviews and mitigate their impact.

Firms generally monitor their online reviews and evaluate their strategies accordingly, Xie explained. “However, they do so by focusing on average rating rather than a single rating, and after the product has sufficient time to be evaluated by consumers. Our research suggests that firms need to pay attention to a special single review (i.e., the first one) as soon as it is posted.”

Consumers, on the other hand, might want to check multiple sites’ reviews before they rule out a product. If you’re looking at several sites to compare prices, Park suggests comparison shopping reviews, too. (For big ticket items, Park also checks third-party reviews like Consumer Reports.)

Because shoppers consider user reviews more trustworthy than information from advertising, it’s important to understand the factors that could skew those ratings.

“We want consumers to know that this information can be easily distorted,” Park said.

The article The Strange Impact Of The First Consumer Review appeared first on Eurasia Review.