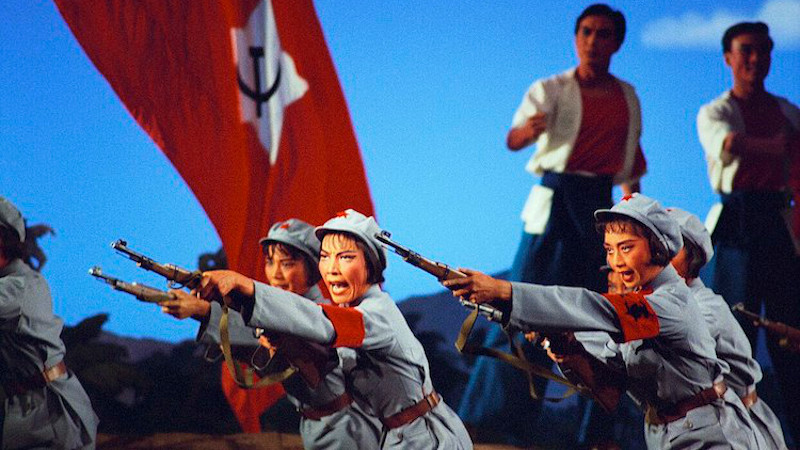 “Are you a proletarian?” asks the brigade commander. Receiving no response, she clarifies her question: “Do you own land?”

Wu Qionghua, a young woman who is dressed in red linen and has a long-plaited braid, defiantly responds, “I am a slave girl. I own nothing.” Qionghua was orphaned and enslaved after the local landlord Nan Batian (“Tyrant of the South”) killed her family. As the film plot develops, we discover that Qionghua had just escaped enslavement with the help of Hong Changqing, a Communist cadre.

We turn to the other woman onscreen, Honglian, with her head slightly bowed. “What about you?” asks the commander.

“You are certainly a proletarian,” the commander affirms. “Pass.”

With that, the 121st and 122nd members are inducted into the first all-women military brigade of the Chinese Red Army. Or so it goes in this 1961 feature film iteration of the story, “The Red Detachment of Women,” directed by Xie Jin.

A Story Still Necessary to Tell

I pass through the park gates. A few minutes late, I quickstep past the snack vendors, gift shops and monumental light displays. They usher hand-signals for me to wait—the show has already started. I watch as the 2,400-capacity stands start shifting next to us, in sync with the epic symphony music blasting from above. I’m here for the nightly show of “The Red Detachment of Women” (红色娘子军) production in Sanya, the beach-lined holiday town in the island province of Hainan, China.

The Red Detachment was the first all-women military brigade that became a much-mythologized part of Chinese modern history. It has been made and remade into countless socialist—or “red cultural”—productions over the past century.

The stands stop moving, and I am ushered into my seat. Enter stage left into the coconut groves of subtropical China. The story is set in 1931 Hainan, situated in the South China Sea. It is a region long contested and exploited by colonial interests, neighbored then by British Malaya and Singapore, French-controlled Vietnam, Dutch “East Indies” or what is now Indonesia and the United States-occupied Philippines. That same year (1931), Manchuria—in northeast China—was annexed by the Japanese, foreboding the fascist imperialism that would dominate the region.

What is known in the Western world as World War II was in China a 14-year-long war of resistance, costing more than 35 million Chinese lives. It is in this year where we meet our protagonists Qionghua and Honglian in the founding moments of the Red Detachment brigade. Qionghua, however, is not a fictional character.

Her character is based on Pang Qionghua, who was born in 1911—the year of the Xinhai Revolution that saw the last dynasty fall in China. Arranged to be married from the age of four, Pang Qionghua would escape her fate to join the Red Army in 1930. She became the commander of the 103-strong women’s brigade. They were spies who safeguarded arms arsenals and earned the title of “Red Detachment of Women” after several successful battles against the enemy Nationalist Army. The last surviving member passed away in 2014. Since the 1930s, this story has been told and retold, adapted to the needs of a changing China.

First documented by Liu Wenshao in a 1957 news story, then transformed into a local Hainanese opera, the feature film version brought the real-life story to popular audiences. The film turned into a mass-print comic book, before becoming a national ballet led by Jiang Qing—or “Madame Mao”—the very ballet selected to be performed for former U.S. President Nixon in his rapprochement visit to China in 1972.

During the years of the Cultural Revolution (1966-1976), the wordless ballet was adopted as one of the “eight model operas” suitable for a nation of 800 million people. It has been performed 4,000 times over the past five-and-a-half decades. It is an important cultural milestone in establishing a post-revolutionary national identity and for bringing modern Chinese culture to the international stage.

More recently, the story was made into a TV series in 2006 and restaged by the National Ballet of China in 2014. In each era, the story of Qionghua and Honglian stayed contemporary because it was still deemed a story necessary to tell.

The massive audience stands, where I am seated, start moving again to the latest mega-production of this story being staged in Sanya. Artificial bombs rain from the sky into an artificial river. A searchlight shines a red laser hammer and sickle onto the distant mountains. A landlord is paraded into the audience with a paper cone hat. Grandmothers comment aloud as if they were watching a TV drama at home. There are acrobatics, 11 movable stages, and a 300-member cast and crew. And this happens every night, for 99 yuan a ticket ($15).

This project, which is the first of its kind in China, premiered on July 1, 2018, in the Sanya Red Detachment of Women Performing Arts theme park project, which combines arts, culture and red history on one platform. The 1.2 billion yuan (more than $185 million) project stretches across an area of 179 acres and is jointly being organized by state and private actors, including Beijing Chunguang Group and Shaanxi Tourism Group, which has been responsible for many large-scale red cultural productions across the country. It is truly a project of socialist culture with Chinese characteristics.

On May 1, 2020—International Workers’ Day—Hainan celebrated 70 years since its liberation, when the end of the Battle of Hainan Island in 1950 saw its formal incorporation in the People’s Republic of China. In June 2020, the Central Committee of the Communist Party of China (CPC) and the State Council released the master plan to turn the entire island into a pilot free trade port.

By 2050, Hainan is set to become an unparalleled international financial, tourism, technology and logistics hub. In his opening remarks of the 13th National People’s Congress—China’s highest legislative body—Premier of the State Council Li Keqiang highlighted the importance of red culture in this strategic national project: “We need to stimulate the development of the tourism industry, fully use regional tourism potential, develop rural and ‘red’ tourism.”

In an impressive show of post-pandemic recovery, during the October 2020 national holiday week, Sanya received a record 729,000 visitors—more than doubling its permanent resident population—and generated more than 4 billion yuan in revenue (about $600 million), up 39 percent year-on-year.

As the crowds shuffle down the stands, young children scurry to take photographs with the young actors, with their parents lagging behind. This is another kind of theme park, another type of heroine story. Some come to see the spectacle, others for family time. I leave with a selfie with one of the young actor-soldiers in their gray-blue tunic suits and red-star caps and a new Red Detachment-branded notebook to write this story in. On the eve of the CPC’s centenary to be celebrated in July 2021, red culture with Chinese characteristics not only is alive but also continues to reinvent itself and find new life.

* This article was produced by Globetrotter. Tings Chak is the lead designer and a researcher at Tricontinental: Institute for Social Research, an editor of Dongsheng (Eastern Voices) and a Globetrotter/Peoples Dispatch fellow.