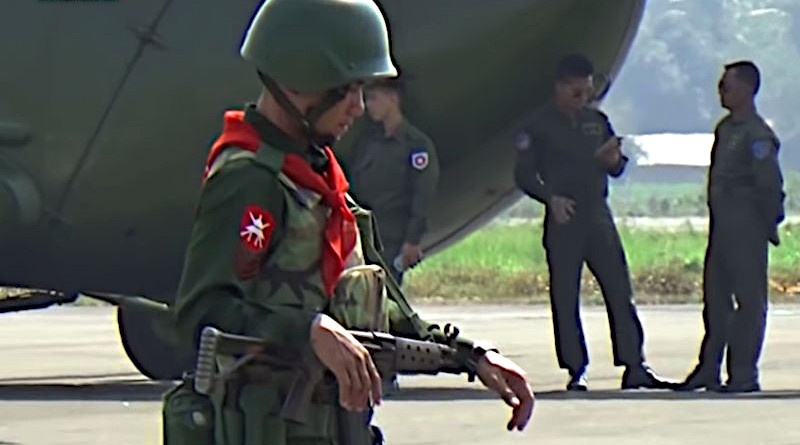 On Monday, Myanmar’s military dissolved parliament in a bloodless coup that gave it control of the country. Aung San Suu Kyi, the head of the democratically elected government and whose ruling National League for Democracy (NLD) won in a landslide of the 2015 and 2020 elections, was taken into custody along with other party leaders.

The putsch, which saw General Min Aung Hlaing declare a one-year state of emergency, drew condemnation from Western governments and from Myanmar’s 10 ethnic armies that have signed the Nationwide Cease-Fire Agreement (NCA) with the military—a fragile 2015 pact intended to end decades of conflict that have hindered the country’s political and economic development.

The U.N. Security Council on Thursday expressed “deep concern at the declaration of the state of emergency imposed in Myanmar by the military on 1 February and the arbitrary detention of members of the Government, including State Counselor Aung San Suu Kyi and President Win Myint and others,” it said in a press statement that called for the release of detainees but stopped short of condemnation after days of deliberations.

During Aung San Suu Kyi’s 2016-20 tenure, only two ethnic armed groups joined the NCA, but following the 2020 election in November, the NLD had said ending the country’s civil wars was a “top priority.” The military, which has traditionally opposed any efforts to reconcile with the groups, is unlikely to further the peace process, experts said.

On Tuesday, the Peace Process Steering Team (PPST), which comprises the leaders of the 10 NCA signatories, convened a special meeting and issued a statement condemning the military coup, saying it had derailed efforts to build a federal democratic union in Myanmar.

“We are still in the middle of democratic transition. This military coup has reversed that course and left our goal of establishing federalism further away,” said PPST spokesperson Padoh Saw Tardo Hmu, who is also secretary of the Karen National Union (KNU)—one of the 10 NCA signatories.

“We see this action as contrary to what the whole country had accepted as a common goal. We are calling for the unconditional release of all detained leaders, including State Counselor Daw Aung San Suu Kyi, and the establishment of conditions that allow for continued negotiations.”

Padoh Saw Tardo Hmu said that by terminating government delegates, the Tatmadaw had brought the peace process in a standstill, as the NCA was signed by both military and government delegates. But he said that the 10 NCA signatories intend to stick to the path agreed to as part of the pact and urged the military to declare a nationwide ceasefire.

The armed groups also called on the U.N. and international community to intervene and assist in resolving the country’s problems.

“First, the military coup is detrimental to trust and peace. Second, the RCSS will stand with the people in building federalism and democracy. Third, we are concerned that the NCA may be defunct as a result of the coup. And lastly, we are urging all relevant parties to meet and continue negotiations,” he said.

RFA was unable to contact representatives of the Federal Political Negotiation and Consultative Committee (FPNCC), an alliance of some of the largest of rebel forces that have been at war with the central government for decades and have resisted signing the NCA because they want to keep their armies.

However, the FPNCC—which is pursuing a confederate system in Myanmar that allows ethnic organizations to maintain their own armed forces, despite the objections of the Tatmadaw—had welcomed the NLD’s election victory and pledged to work with the government toward national reconciliation based on equal partnership.

RFA spoke with Min Zaw Oo, executive director of the Myanmar Institute for Peace and Security (MIPS), who said the continuation of the peace process now depends on the new government formed by the military.

“How the NCA is viewed, how the contents of the agreement are adhered to, and how other peace agreements proceed all depends on the new government,” he said.

“If the new government recognizes the peace contracts and agrees to uphold the NCA, the peace process between the ethnic armed organizations and the state will continue.”

Outside experts were less convinced, largely agreeing that the military will exploit its new power to end negotiations with the country’s ethnic armies.

Murray Hiebert, a senior associate of the Southeast Asia Program at the Washington-based Center for Strategic and International Studies (CSIS), said the military had shown little interest in the peace process to begin with and is unlikely to do so going forward.

“I think with most of the armed ethnic groups, the coup puts paid to the peace process,” he said.

“In recent years, the … process was largely run by Aung San Suu Kyi and her team. Often the military didn’t attend the talks and the military often vetoed efforts at finding a compromise solution.”

David Steinberg, professor emeritus of Asian studies at Georgetown University and an expert on Myanmar, said that even when the NLD was in power, “the peace process wasn’t going anywhere.”

“Aung San Suu Kyi had her own goals about that, but the military—they control the minority border area ministry,” he said.

Steinberg said that the military’s power is protected under the country’s 2008 constitution and that it is willing to trample the rights and freedoms of the people, as long as it can retain control.

“They don’t look at these democratic values as being important, so therefore they’re willing to give up some of that as long as they retain the elements critical to them, which is the autonomy of the military and control over that no minority group will secede from the Union or have too much power.”

Experts also agreed that with the coup there is little hope for any kind of resolution to the situation facing the country’s Muslim Rohingya population, more than 830,000 of whom fled western Myanmar’s Rakhine state for neighboring Bangladesh during brutal military-led crackdowns on their communities in 2016 and 2017 in response to deadly attacks by a Rohingya militant group on police outposts. The refugees still live in vast, cramped displacement camps on the Bangladeshi side of the border.

While Myanmar has pressed Bangladesh to send the Rohingya home, the refugees themselves have resisted repatriation without citizenship and safety guarantees, and the more than 600,000 who remain in Myanmar are in a precarious state, with an estimated 125,000 confined to open-air camps in Rakhine state since 2012.

CSIS’s Hiebert told RFA he believes “there’s almost no chance of finding an amicable solution” to the situation.

“The Tatmadaw has no trust among the Rohingya,” he added.

Georgetown’s Steinberg agreed, noting that Myanmar was more than willing to sweep the issue under the rug when the country was helmed by Aung San Suu Kyi. The NLD leader led the country’s defense against genocide-related charges over the military’s crackdown on the Rohingya at the International Court of Justice (ICJ) in December 2019, saying it occurred during operations to sweep northern Rakhine of Muslim insurgents who had attacked police posts.

“They weren’t going to do anything about the Rohingya because it was ethnic cleansing and a very strong prejudice against them and against Muslims in general.”

Charles Dunst, a visiting scholar with the East-West Center, told RFA that the coup “will only worsen the multitude of crises that Myanmar faces, including that of its multiple civil wars.”

“The Tatmadaw not only remains responsible for violence against the Rohingya, but has a poor relationship with various other minority groups waging such war against what they believe to be an illegitimate state,” he said.

“I expect that the Tatmadaw will struggle to govern, ultimately leading to the proliferation of further conflict and poverty.”