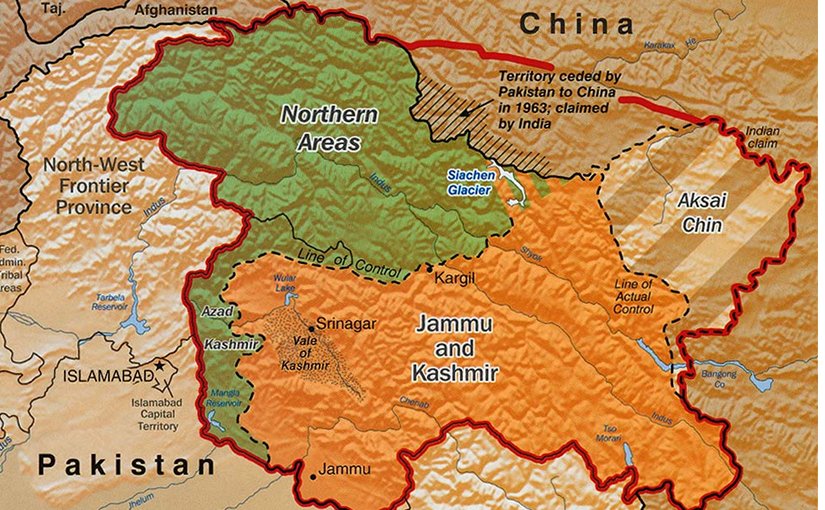 Kashmir Solidarity Day, also known as ‘Youm-e-Yakhjehti-e-Kashmir’, has been observed in Pakistan since 1990 on February 5 every year.  Pakistan government has announced a public holiday on February 5 to show solidarity with Kashmiri people, who have been fighting for their inalienable right to self-determination under United Nations resolutions, and condemn the Indian illegal occupation of Jammu and Kashmir.

On February each year, whole Pakistani nation through many ways such as speeches, protests and media shows support to their Kashmiri people, highlight the plight of the oppressed Kashmiri people and tries to bring this issue into the notice of the world community, UN and Human Rights watchdogs. The very beautiful valley has turned into the bleeding occupied valley as well as world’s largest prison because of Indian hawkish, brutal, and rigid policies imposed on the innocent people of Kashmir valley for last seven decades. Furthermore, after PM Modi government’s decision about the abrogation of Article 370 and 35-A of the Indian constitution on August 5, 20202 has added oil to the plights of already suppressed and oppressed people of the valley.

Moreover, the Modi government’s state-sponsored terrorism by increasing armed forces in Jammu and Kashmir through sending additional 35,000 soldiers. Additionally, the Indian government put senior politicians in Kashmir under house arrest, curfewed the entire population, closed schools, all networks, and media coverage. While Pakistan condemned that Modi government’s unilateral decision through the expulsion of the Indian Ambassador, limiting diplomatic relations, and calling on international forums to stop Indian brutalities within Indian illegally occupied Jammu and Kashmir (IIOJK). Additionally. Pakistan’s Foreign Minister, Shah Mehmood Qureshi, while a press conference said that Pakistan’s eyes are over Srinagar and Jammu including this he explained that Srinagar is our final destiny. India has changed from shinning India into burning India because of extremist policies of Indian government resultantly everywhere in India fire is burning.

The policies and actions of the present BJP government have generated multiple problems not only in India but also in Jammu and Kashmir. PM Modi used political rhetoric to influence and emotionally blackmail the people of India mainly Hindu community through spreading Hindu nationalist perspective, and somehow he has been successful. As far as the popular narrative is concerned, India has been more successful than Pakistan in defaming Pakistan as well as propagating and highlighting the Kashmir issue. The Indian government has been more successful through getting the attention of the global forums via state-sponsored media network. While recent, EU DisinfoLab report has exposed the Indian propaganda against Pakistan and spreading bogus news about the Kashmir though fake media outlets.

Such kind of Indian actions has been provoking the tensions between two nuclear power states which ultimately take them towards conflict resultantly the peace of the region would be disturbed. If India takes such an action like Arial strike against Jaesh Muhammad within Pakistani territory than Pakistan has no choice except respond/retaliate in nations defence, but both the nations have to think rationally and solve their tensions through dialogue and peaceful means. However, once you responded then no one could say where it would go, it might take them towards the destruction of both the countries because of nuclear power. In this regard, Pakistan wants to engage the third party like America or China to solve the Kashmir issue. Moreover, China is an influential regional state but how it is going to deal with India in pressurizing regarding the solution of Kashmir issue while both the countries have difference of opinion over many issues such as China-India border clash.

As for as Indian perspective is concerned, it does not want to engage the third party in the solution of Kashmir conflict. The Indian government considers the Kashmir issue as bilateral between India and Pakistan that is the clear violation of UNSC resolutions. Furthermore, India has been doing Human Rights Violations (HRVs) and violation of United Nations Security Council (UNSC) resolutions on the disputed status of Jammu and Kashmir. It puts many questions over the authority and reliability of international institutions as well as the nations which are considered the protectors of human rights violations and democratic values. But this biased behaviour of such nations, as well as global forums towards many countries, create suspension within weak and developing nations. Therefore, it is high time for the UN, human rights organisations, the US, China and other major powers to listen to the plights of Kashmiri people and take serious steps for the solution of this issue. Moreover, the solution of Kashmir issue not only provides the people of Kashmir the right of self-determination but also it creates peace and stability throughout the region by avoiding any major conflict between two nuclear power states namely India and Pakistan.

*The writer is Ph.D. scholar in the Department of Defense and Strategic Studies, Quaid-i-Azam University Islamabad, Pakistan.