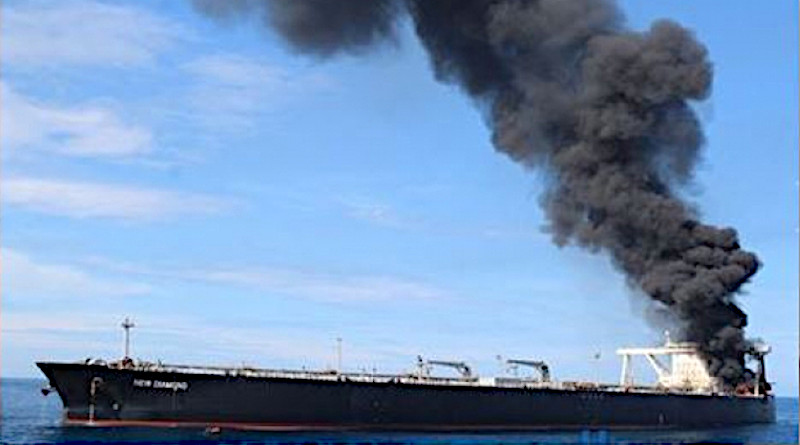 Sri Lanka’s Army Commander Lt. Gen. Shavendra Silva said Friday that all possible steps have been taken to prevent any oil leaking from the Panama-flagged tanker “MT New Diamond” reaching the Sri Lankan shores in the event there is an oil spill from the burning oil tanker.

The MT New Diamond began burning on Thursday, September 3, and is carrying about 270,000 tonnes of crude oil.

Addressing a media briefing at the Government Information Department, Gen. Silva said that the crew members onboard the vessel have been transferred onto another vessel. It’s reported that one Filipino crew member died in an engine room explosion that sparked the fire, with the remaining 22 crew members of the distressed oil tanker been safely isolated adhering to health guidelines.

However, Silva noted that as the engines of the oil tanker are non-operational, the vessel is drifting towards Sri Lanka and is currently around 22 nautical miles off the Sri Lankan coast.

Silva said that all possible efforts have been taken to douse the fire onboard but, in the event, there is a leakage all measures are being taken to prevent any catastrophic effect on Sri Lanka.

Responding to a question on the cracks that were observed on the ship’s hull, Sri Lanka’s Rear Admiral Y. N. Jayarathna said several cracks in the hull of the oil tanker was caused by the intense heat due to the fire.

The cracks were observed right under the superstructure, Jayarathna said, while noting that heat at one place for a long time can cause such cracks.

Jayaratna, however, pointed out that these cracks does not suggest that the vessel is breaking apart.

Relatedly, Sri Lanka’s Prime Minister Mahinda Rajapaksa has issued instructions to the Coast Conservation Department to take all possible steps to avert an environmental disaster that could happen due to the raging fire onboard the ioil tanker, according to the Urban Development and Housing Ministry Secretary Sirinimal Perera.

Perera said that the Prime Minister had contacted the ministry officials on Thursday night and instructed them at length on measures that need to be taken. “The Marine Environment Protection Authority (MEPA) is coordinating efforts with other institutions to avert an environmental disaster based on the instructions issued by President Gotabhaya Rajapaksa and Prime Minister Mahinda Rajapaksa.”