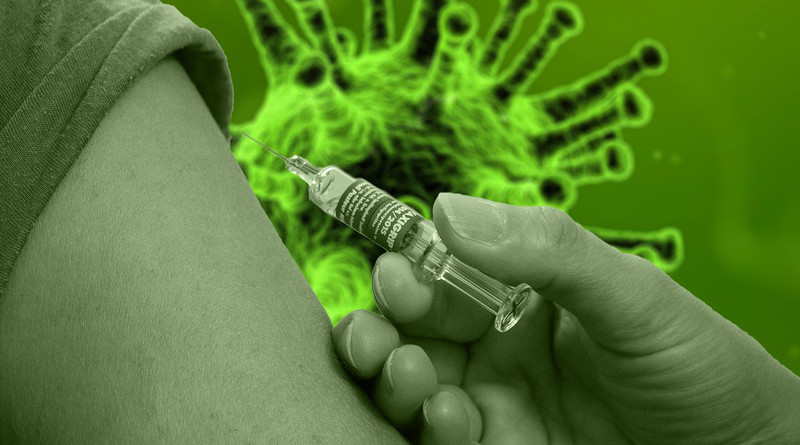 Anti-COVID vaccine messages have spread to Poland thanks to pre-existing international networks of anti-vaxxers, far-right politicians and ultra-conservative groups that stretch from the US to Latin America.

“Iknow there’s a lot of slaughterhouses in Poland – you make the best kielbasa [sausage] in the world,” Robert F. Kennedy Jr, one of the most prominent figures of the global anti-vaccination movement, told an online session of the Polish Parliamentary Group for the Safety of Vaccinations for Children and Adults on December 18.

“In the US, they direct all cows down a shoot, which gets narrower and narrower, until they end up in the slaughter house. That’s what they’re doing to us with the [COVID-19] vaccine. But we cannot afford to be cattle,” he declared.

Kennedy was speaking, non-sequiturs and all, at the invitation of parliamentarians from the far-right Confederation Liberty and Independence coalition (Konfederacja Wolnosc i Niepodleglosc, often shortened to Konfederacja), whose leadership include vaccination sceptics.

“This is a global problem that is being pushed by a global medical cartel, the global pharmaceutical companies and regulatory agencies,” Kennedy went on to claim. “And our response must be global as well. We need to create institutions that are enduring, persistent and strong enough to counter the unleashed power of this medical tyranny.”

Kennedy, an environmental lawyer turned anti-vax campaigner, is the son of the former US attorney general and assassinated presidential candidate Robert F. Kennedy and nephew of former president John F. Kennedy. His appearance at the session was popular, with over 200,000 views and 6,000 shares on Facebook alone, and is indicative of how existing connections between domestic and foreign anti-vaxxers, far-right politicians and ultra-conservative groups are proving useful in disseminating anti-COVID vaccination rhetoric throughout Poland.

At the same time, the pandemic is helping to create new opportunities for these networks. While much has been made of Russian-produced disinformation – and this is an issue in Poland, too – many ‘COVID entrepreneurs’ from across Europe, the US, Latin America and elsewhere are contributing to the ‘infodemic’ in Poland while pursuing their own anti-democratic, anti-EU or populist agendas.

Two of the most prominent anti-vaxxers in Poland currently are Justyna Socha and Piotr Jawornik, both associated with the organisation STOP NOP – National Association for Vaccination Knowledge.

Both Socha and Jawornik are parliamentary assistants of one of leaders of Konfederacja, Grzegorz Braun, who is among the main proponents of the anti-vax movement on the Polish political scene.

According to research by social media expert Anna Mierzynska, published in January by oko.press, over the last few months Konfederacja’s social media channels have become increasingly popular on the back of publishing material sceptical of the COVID vaccines being developed by pharmaceutical companies (though this is not yet being reflected in opinion polls, Mierzynska points out).

Polish anti-vaxxers were already well connected to international networks of like-minded people (Kennedy had already spoken to the Polish parliament in April 2019), but the COVID pandemic has intensified this cooperation.

By the time of his appearance at the Parliamentary Group for the Safety of Vaccinations session in December, Kennedy had been increasingly active in Europe promoting conspiracy theories about the pandemic, including speaking at a notorious demonstration in Berlin on August 29, when a section of the protesters, some bearing flags of a far-right group, attempted to storm the Reichstag. Braun was also present at that demo.

Two months later, Kennedy was using his popular Facebook page to invite people to join what he called the “Global Resistance” – a series of anti-vax protests that took place on October 24 in 15 countries, stretching from Europe to Latin America. In Warsaw, the event was advertised as “March for Freedom” and organised by Socha and Jawornik through STOP NOP, with Braun one of the main speakers. The event was attended not only by Polish anti-vaxxers, but also those from Italy, Spain and the US, who even organised a press conference to mark their presence in the Polish capital.

Angelo Giorgianni, one of the Italian speakers at the press conference, is a magistrate who created the Italian anti-vax group L’Eretico (“The Heretic”). Back in 2000, Giorgianni was reportedly forced to resign as under-secretary of state at the Ministry of Interior over suspicions of collusion with organised crime (he was never prosecuted and denies the allegations).

According to his own social media channels, Giorgianni attended several events in the Polish capital in the last months of 2020. His colleague from L’Eretico, Giulio Tarro, is a virologist who joined Kennedy in speaking at the December parliamentary commission session on the efficacy and safety of the COVID vaccines, which was chaired by Konfederacja’s Braun and his Konfederacja colleague and prominent far-right politician Janusz Korwin-Mikke.

The global nature of these associates – the Italians, Kennedy and others – means local activists often present them as “international experts” in the Polish media, which is meant to add credibility to their arguments.

Back in Italy, Giorgianni and his organisation have taken part in at least one anti-vax demonstration promoted by Giuliano Castellino, a leading figure in the far-right Forza Nuova party, as widely reported by various Italian media.

“They have accused us of being fascists for demonstrating today,” Giorgianni told a cheering crowd in Rome on September 5. “But the fascists are those who are denying us our freedom… who have shut us up inside our houses for four months, who have prevented us from helping our dying.”

Braun and Fuorza Nuova leader Roberto Fiore met in Warsaw in August, but it’s unclear whether the topic of the pandemic was a subject of their talks. Forza Nuova’s links to the Polish far-right date back several years, with members of the Italian party taking part in Poland’s annual far-right November 11 Independence Day march in Warsaw.

Last year, Jawornik and his STOP NOP colleagues got together with Italian, French and Danish anti-vaxxers to prepare a petition against “compulsory vaccination and global control” addressed to all the governments and parliaments of the world.

More recently, Jawornik and Giorgianni have started cooperating as part of a newly created organisation called Organizzazione Mondiale per la Vita (World Organisation for Life), which has over the last few months expanded into Latin America. The group claims to be “assuming the responsibility of taking care of the human race”, which it claims other international organisations have “betrayed”. This group includes the World Health Organization (WHO), whose name the new group references in its own.

The social media pages of this group promote discussions featuring well-known anti-vaxxers such as Kennedy or the German lawyer Reiner Fuellmich.

In a post in late December, Jawornik announced the World Organisation for Life was “suing the European Commission for abuses and violations of human rights… with the help of Robert F. Kennedy”.

STOP NOP did not respond to BIRN requests for an interview or to provide further details of this lawsuit.

Joining the anti-vaxxers in attempts to undermine the WHO during the COVID pandemic are ultra-conservative groups such as Ordo Iuris in Poland and some of its European colleagues from the Agenda Europe forum, which have all been critical of the global organisation for years for promoting women’s and LGBT rights.

“The coronavirus pandemic has undermined many people’s trust in the WHO,” writes Ordo Iuris on its website. “However, the negative aspects of the activity of the WHO were visible already from before. This organisation, apart from activities connected to health protection, implements many ideological claims, such as promoting abortion or vulgar standards of sex education.”

Throughout 2020, Ordo Iuris promoted an international petition entitled “Make WHO great again”, demanding governments “take a stand against the ideological proposals of the WHO”. The petition is available in four languages other than Polish (English, Spanish, Croatian and Romanian) and is supported by several other ultra-conservative groups in Europe.

These include Croatia’s In the Name of the Family, which in 2013 managed to trigger a referendum and get the constitutional definition of marriage changed to exclude gay couples; Romania’s Pro Vita Bucharest, which has similarly campaigned for a constitutional ban on gay marriage; and Spain’s Centro Juridico Tomas Moro, a “pro family” group which promotes conspiracy theories about COVID on its social media channels, including one called the “Global Reset” – a baseless theory that twists innocent comments by politicians and other worthies into a plot where global leaders have orchestrated the pandemic to take control of the world economy.

CitizenGO, Ordo Iuris, In the Name of the Family, Pro Vita and others have been networking for years under the framework of Agenda Europe. CitizenGO has also advised Ordo Iuris on its draft resolution for municipalities that want to reject “LGBT ideology”. Like other ultra-Catholic actors, Ordo Iuris has also raised concerns about the links between COVID vaccine production and abortion.

Another key group in the international ultra-conservative network promoting COVID scepticism is the Brazilian Plinio Correa de Oliveira Institute, whose website runs articles about how the panic caused by a virus “originating in communist China” creates the opportunity for a “Great Reset” and a “global despotic government”.

According to an investigation published in December by onet.pl, the Brazilian group was for years financed by the Polish Piotr Skarga Foundation, which in Poland helped found and finance Ordo Iuris and is closely cooperating with it on various campaigns. Both the Plinio Correa de Oliveira Institute and Piotr Skarga Foundation are offsprings of the Brazilian group “Tradition, Family and Property”, which has faced accusations of being a sect in several countries.

Critics of the ultra-conservative networks argue that they are attempting to dismantle the current human rights regime – by undermining existing international treaties and bodies – and shape international law in a “fundamentalist” direction.

“At stake is not the actual performance of WHO or any lessons to be learned about the early days of the pandemic; rather it is that the WHO’s work, based on science and rigorous academic discipline, consistently contradicts the assertions of anti-gender actors on health and specifically on human sexuality,” Neil Datta, secretary of the European Parliamentary Forum for Sexual and Reproductive Rights, told BIRN.

“WHO’s commitment to evidence, science and medicine thus puts it at odds with the religious-inspired ‘truth’ of these anti-gender actors – and for that, WHO must pay the price,” Datta explained.