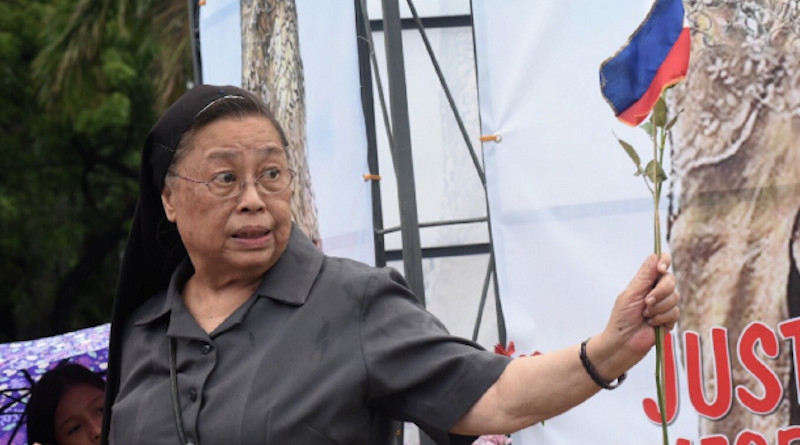 A senior government official has accused a Benedictine sister of being a “long-time ally of a communist terrorist organization” after condemning the libel conviction of top journalist Maria Ressa and news writer Reynaldo Santos, Jr.

Much of her criticism was aimed at the judge in the case, Rainelda Estacio Montesa, who she said studied at St. Scholastica, a Benedictine school.

Sister Mananzan said she was saddened that the judge did not show the values of a “scholastican” education.

“Whatever successes you [Judge Montesa] may have attained, I am afraid you are a failure as scholastican. Some consolation is that Maria Ressa is also a scholastican,” Sister Mananzan added.

Presidential communications undersecretary Lorraine Badoy responded to the nun’s post by linking her with the Communist Party of the Philippines.

“I am not intolerant of MJ’s [Mary John’s] views. If she thinks Maria Ressa is the best thing since sliced bread, what do I care? We are a democracy after all. Not communist like others strive for us to be,” she said on social media.

Sister Mananzan was founder and chairperson of the leftist Gabriela Women’s Party for 18 years. The group was founded in 1984 to advocate for women’s issues and later became one of the biggest groups to fight the Marcos regime.

Undersecretary Badoy also said Mananzan’s close ties to a “communist terrorist group” had made her sound hateful and divisive, as communists are.

“Why is Mary John Mananzan so closely allied to a group that has brought this country so much grief and destruction and that has, as its main goal, the overthrow of the government?” she said.

The official’s post drew demands for a public apology from women’s and human rights groups.

“Sister Mananzan is only the latest on a long list of activists and Duterte critics red-tagged by Badoy and the agencies she works with. We demand a public apology from Badoy retracting and correcting her condemnable Facebook post,” said the lay group Movement Against Tyranny in a statement.

The group also said the undersecretary had gone too far in red-tagging and accusing one of the pillars of Philippine activism.

“Such wild and baseless accusations coming from an undersecretary and official not only defames Sister Mary John’s person and reputation but puts her life and liberty in peril,” the group added.

“That was her personal view. We are in a democracy … Freedom of expression is guaranteed under the Bill of Rights,” he told reporters.