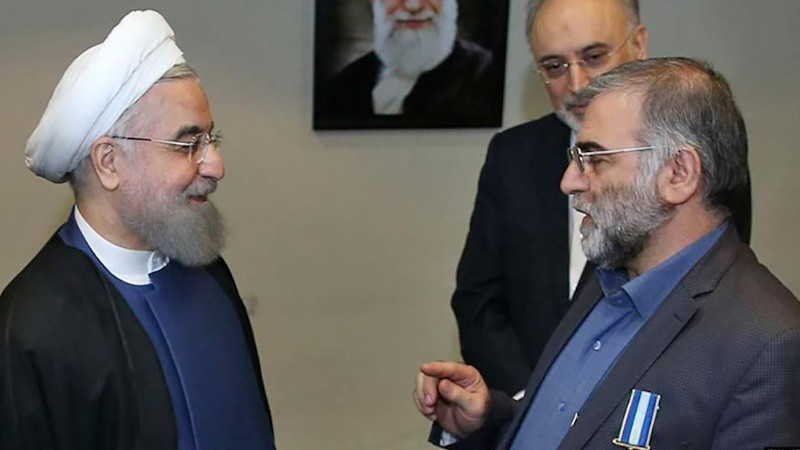 (RFE/RL) — The assassination of Mohsen Fakhrizadeh, who was believed to have been at the heart of Iran’s past, covert Iranian nuclear activities, has put the Islamic republic in a difficult spot.

The brazenness of the attack, which took place outside the Iranian capital on November 27, dealt an embarrassing blow to the clerical establishment at a time of unprecedented pressure due to crushing U.S. sanctions that have devastated Iran’s economy.

The authorities have blamed the “complex” operation on Israel and an exile opposition group.

Israel, which is thought to have been behind a July explosion at Iran’s Natanz nuclear facility and the assassination of at least four other Iranian nuclear scientists about a decade ago, has declined to comment.

Iranian and international observers have speculated that not responding to Fakhrizadeh’s killing might project weakness and increase the risk of similar assaults in the future, while harsh retaliatory action could lead to a costly escalation and torpedo the chances of diplomacy with the incoming U.S. administration.

U.S. President-elect Joe Biden, who was vice president when the Joint Comprehensive Plan of Action (JCPOA) was struck under the previous administration in 2015, has vowed to rejoin the deal if Tehran returns to strict compliance.

“To restore its economy, Iran needs a full or partial return to the nuclear deal. To restore deterrence/pride it will want to avenge Fakhrizadeh’s death. Doing the latter without sabotaging the former is most difficult,” Karim Sajdadpour, an Iran analyst at the Washington-based Carnegie Endowment for International Peace, said on Twitter.

For now, comments by Iranian decision makers appear to suggest that Tehran’s initial reaction is likely to be restrained despite harsh threats from conservatives. Those include calls for a ban on UN access to nuclear sites or, as the ultra-hard-line Kayhan daily suggested, strikes on the Israeli port city of Haifa with the aim of causing material damage and “heavy human casualties.”

Retaliate, But Not Now?

Iran’s highest authority, Supreme Leader Ayatollah Ali Khamenei, has called for the perpetrators of the attack to be “firmly” punished and for Fakhrizadeh’s “scientific and technological efforts in all the sectors in which he was active” to be continued. But he has refrained from calling for “severe revenge,” as he did following the U.S. assassination in January of General Qasem Soleimani, who led the elite Quds Force of the Islamic Revolutionary Guards Corps (IRGC), which steers many of Iran’s regional activities.

President Hassan Rohani and his aides have said Tehran will respond in “due time” and warned that the country should not fall into Israel’s trap, which they believe is aimed at killing the JCPOA and provoking the Islamic republic to respond.

“This assassination will not remain unanswered, but our response won’t come at a time, place, or in a form that they expect,” government spokesman Ali Rabiei said earlier this week.

Alex Vatanka, director of the Iran program at the Washington-based Middle East Institute, said he believes Iran is unlikely to retaliate for Fakhrizadeh’s killing “anytime soon.”

“Tehran badly wants to see if a new process of diplomacy is possible with Biden. The Iranians expect Biden to be nearly as pro-Israel as Trump. Still, his arrival in the White House does provide Tehran with an opportunity to come back to the table from a position where Iran can claim to have successfully seen off Trump’s ‘maximum pressure’ campaign,” Vatanka wrote in a November 30 analysis.

Inside Iran, Fakhrizadeh’s killing has led to the intensification of a power struggle. Hard-liners are using it to increase their attacks on Rohani, whose administration negotiated the 2015 nuclear deal and its limits on Iranian nuclear activities in exchange for international sanctions relief.

U.S. President Donald Trump withdrew the United States from the deal in 2018 and reimposed tough sanctions as part of the “maximum pressure” campaign Washington said was intended to change Iran’s behavior. Tehran has responded by following a policy of strategic patience, gradually reducing its commitments under the accord.

Speaking on December 2, Rohani rejected a bill approved the day before by majority hard-liners in parliament that calls for a halt of UN nuclear inspections and the boosting of uranium enrichment, saying it was “harmful for the process of diplomatic activities.” The bill from lawmakers, who don’t decide about the country’s nuclear policies, was a show of defiance following Fakhrizadeh’s assassination.

Amid the dispute, each side has attempted to invoke “Martyr Fakhrizadeh” for its own purposes.

On December 1, official government news agency IRNA released photos that showed Rohani had awarded Fakhrizadeh a state medal for his contribution to the nuclear talks that led to the JCPOA.

Hours later, hard-liners aired what state television said was an audio recording of Fakhrizadeh expressing opposition to talks with the United States, which he referred to an “evil demon” that can’t be trusted.

“To what end should we negotiate with the U.S.? Will things get worse? We [already] don’t have dollars, we [can’t] sell oil, we don’t have medicine,” the voice in the recording said.

The increased tug-of-war comes ahead of an Iranian presidential election, scheduled for June, that hard-liners are hoping to win after having retaken control of parliament earlier this year.

Rohani is prevented under Iran’s constitution from running for a third term, but conservatives appear determined to thwart any potential progress under his administration.

In an interview published earlier this week amid speculation that Foreign Minister Mohammad Javad Zarif might seek the presidency, he suggested that hard-liners were attempting to derail Rohani’s foreign-policy efforts by reaching out directly to Biden’s team.

“They say [Rohani and his administration] won’t stay in power, their [grip on power] will last for a few [more] days,” Zarif told the Entekhab news site.