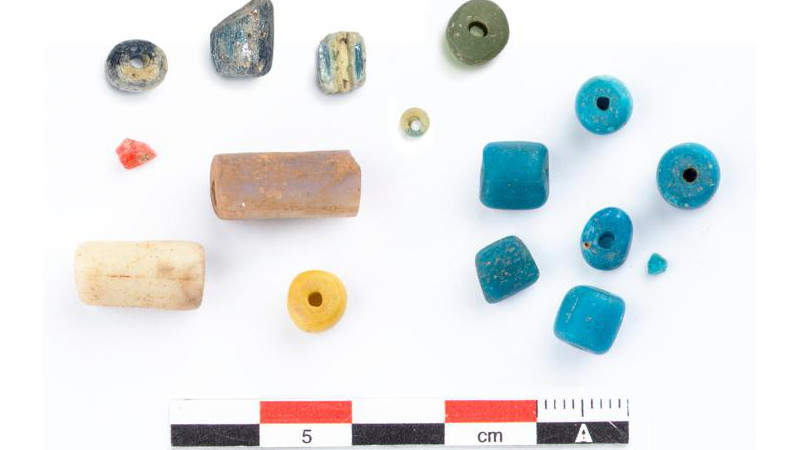 The origin of glass beads dates back to early ancient times. The chemical composition of the beads and their morphological and technical characteristics can reveal where they come from; this information can then be used to reconstruct the trade channels between glass production areas and the sites where the beads were used at different times.

Archaeologists from the University of Geneva (UNIGE), working in partnership with the Institut de Recherche sur les Archéomatériaux at the Centre Ernest-Babelon in Orléans, France, analysed 16 archaeological glass beads found at three rural sites in Mali and Senegal from between the 7th and 13th centuries AD. In the journal Plos One, the scientists demonstrate that the glass they are made of probably came from Egypt, the Levantine coast and the Middle East.

The results show that international trade linking Africa to Europe and Asia during the development of the large West African state configurations did not stop at the great urban centres located along the Niger River: it also connected with local and regional trade. In this way, an extensive network including sub-Saharan rural areas and trans-Saharan trade routes took shape.

The glass beads uncovered in Africa do not only come from the well-known junk cargoes shipped by boat to be exchanged for slaves around the 18th century. Their provenance is much older and their places of origin many and diverse. In western sub-Saharan Africa, the beads have been found in urban archaeological sites from the mediaeval period along the Niger River. Several Arabic texts describe these trade routes crossing the Sahara and connecting the African continent to Europe and Asia.

Members of the Archaeology and Population in Africa Laboratory of UNIGE have been carrying out archaeological excavations for several decades at sites in central Mali and eastern Senegal, including old cemeteries and villages. They have investigated the evolution of lifestyles and techniques. A total of 16 glass beads has been unearthed at three of these sites dating from between the 7th and 13th centuries AD. To understand their provenance and form a picture of what trade was like at a time when the first African kingdoms were developing, the archaeologists embarked on an analysis of their morphological and technical characteristics together with their chemical composition.

Beads: a type of «crystal ball»

Three main components are required for the production of glass. The primary ingredient is silica, which is obtained from quartz ore or sand. This has to be melted, but since its melting point is too high, mineral or vegetable «flux» is added to help the process. Finally, lime from limestone rocks or shells serves as a stabiliser for the glass structure.

“By analysing the chemical composition of the glass, we can begin to understand the origin of the raw materials used to manufacture it and, in some cases, the period when it was produced,” states the first author of the study, Miriam Truffa Giachet, for whom this work is an integral part of her UNIGE doctoral thesis.

The first step consists of collecting the raw materials, which are then transported to a primary production centre where the raw glass is made. This is then transported to secondary centres to manufacture glass objects before being distributed to various sites through trade. The scientists cross-referenced the results of the chemical analysis of the beads with historical sources and data from archaeological excavations, thereby obtaining precise information about the origin of the beads.

The lab meets the field

The study’s originality lies in the cross-analysis of archaeological field data and laboratory data to further our understanding of African archaeological objects. The scientists used laser ablation inductively coupled plasma mass spectrometry (LA-ICP-MS) to evaluate the chemical composition of the beads without damaging them, thanks to laser sampling that tests very small quantities of material. In this way, the probable origins of the beads were identified: Egypt, the Levantine coast and the Middle East.

It follows that sub-Saharan agropastoralists (whose dwellings and tombs archaeological excavations have found traces of) were incorporated into very broad trade networks, as revealed by the presence of objects from distant sources. These locations were in a peripheral position in relation to the regional power centres, but at least one of them, in eastern Senegal, was close to gold mines – a resource that made a significant contribution to their wealth. It is interesting to note that none of the beads analysed had the characteristics typical of the solitary African primary production centre active at the time, in Nigeria, despite the fact that there was internal east-west trade.

Sub-Saharan Africa: connected to the rest of the world

The study adds weight to the idea that at this time prestigious goods circulated through trade routes linking sub-Saharan Africa to the rest of the world.

“The western popular imagination thinks that Africa was disconnected beyond the Sahara, but this was clearly not the case! It was fully integrated into a large international network that linked Africa, Europe and Asia. It was connected to local trade that brought goods of distant origin to the hinterland,” concludes Dr Mayor.