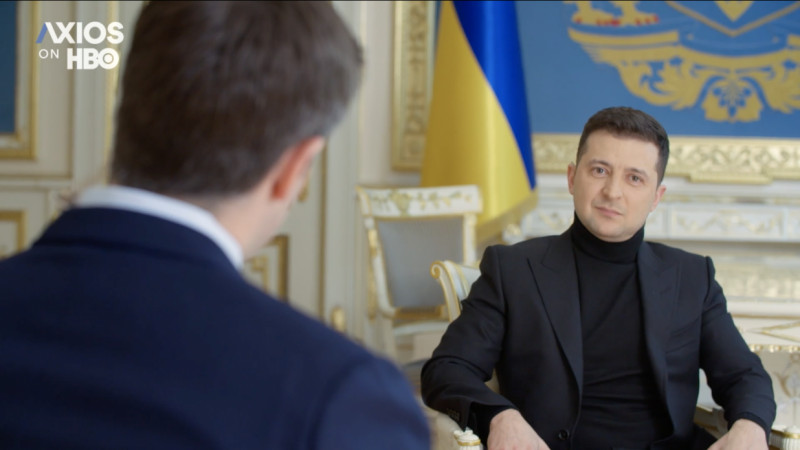 (EurActiv) — Ukrainian President Volodymyr Zelenskiy said in an interview released Monday (1 February) that he would like the new US leader Joe Biden to tell him why the ex-Soviet country was still not a member of NATO.

In an interview with HBO’s documentary news programme Axios, Zelenskiy said that if he had a chance to ask the US president a question, he would focus on Ukraine’s relationship with the US-led military alliance.

“I have a very simple question: Mr. President, why are we still not in NATO?”

The 43-year-old president spoke to HBO on 23 January and the full transcript of the interview was released by his office on Monday.

Since 2014, Kyiv has been fighting against Russian-backed separatists in the east of the country in a conflict that has claimed more than 13,000 lives.

Zelenskiy said that if Ukraine were part of NATO “there would be no escalation in the east of Ukraine.”

Russia can attack “any European country” and even the United States, Zelenskiy said, adding that in the east Ukraine’s army was defending Europeans, not just Ukrainians.

Ukraine’s pro-Western leadership closely cooperates with NATO and in 2019, the ex-Soviet country adopted constitutional changes spelling out its aspirations to join the military alliance as well as the European Union.

Kyiv sees NATO accession as a key way to bolster its defences against Moscow, which has accused the alliance of seeking to make inroads in its traditional sphere of influence.

Months after winning Ukraine’s presidential election in the spring of 2019, former comedian Zelenskiy became the central figure of a US political scandal under Biden’s predecessor Donald Trump.

Trump’s administration published the transcript of a controversial phone call between Trump and Zelenskiy in 2019.

In the phone call, Trump tried to coerce Ukraine into launching an investigation into Biden, whose son used to be a board member of a Ukrainian gas company.

The call is actually embarrassing for Zelenskiy, because it reveals that the President of Ukraine slammed the EU for its alleged “lack of support” for Ukraine.

Zelenskiy told HBO he would like Ukraine and the United States to enter a “new phase” in relations under the Biden administration.

Asked if he was “a little bit” angry with Trump, Zelenskiy quipped: “A little bit?” and laughed.

“These are personal things,” Zelenskiy said. “I would have never allowed it.”

The Ukrainian president also argued in favour of enlarging the four-way talks on the conflict in Eastern Ukraine, known as the ‘Normandy format’, to the United States. The talks currently involve Russia, Ukraine, Germany and France.

The article Zelenskiy Asks Biden Why Ukraine Still Not In NATO appeared first on Eurasia Review.