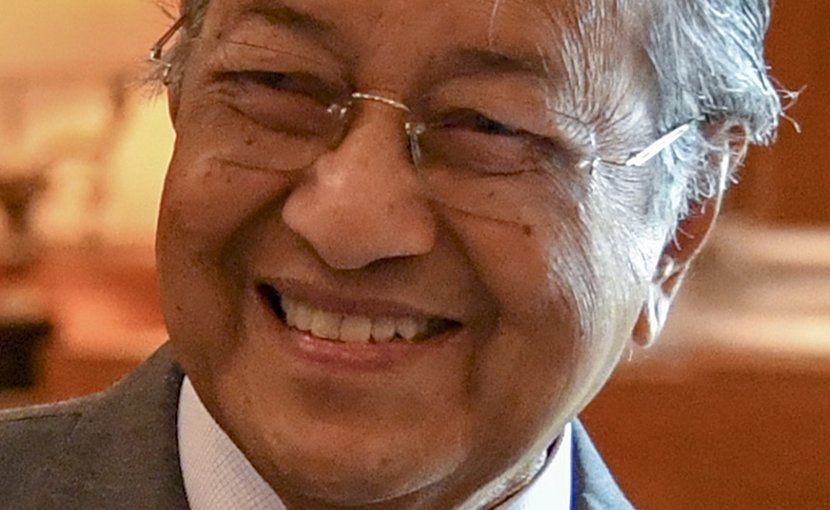 By Noah Lee and Nisha David

Former Malaysian Prime Minister Mahathir Mohamad faced international criticism Friday for saying that Muslims have a “right to kill millions of French people” for past injustices but do not do so, as he pushed back against Twitter and Facebook for having taken down his controversial words.

The 95-year-old statesman, who stepped down as leader of the Muslim-majority Southeast Asian nation eight months ago, posted those words on the social media platforms Thursday after French President Emmanuel Macron angered many in the Islamic world for defending his country’s secular tradition and the right to free speech in public remarks about cartoons that lampooned Prophet Muhammad.

The content deleted on Twitter and Facebook was in response to Macron honoring a teacher who was beheaded by a teenage Muslim migrant in a northern Paris suburb. Facebook apparently took down the entire statement, according to reports.

“I am indeed disgusted with attempts to misrepresent and take out of context what I wrote on my blog yesterday. Those who did that highlighted only one part of paragraph 12 which read: ‘Muslims have a right to be angry and to kill millions of French people for the massacres of the past,’” Mahathir said in a statement issued Friday. “They stopped there and implied that I am promoting the massacre of the French.”

“There is nothing I can do with FB and Twitter’s decision to remove my posting. To my mind, since they are the purveyor of freedom of speech, they must at least allow me to explain and defend my position,” the former two-time prime minister added.

The entire 12th paragraph of Mahathir’s original statement on Thursday, which is posted on his website, says: “Muslims have a right to be angry and to kill millions of French people for the massacres of the past. But by and large the Muslims have not applied the ‘eye for an eye’ law. Muslims don’t. The French shouldn’t. Instead the French should teach their people to respect other people’s feelings.”

“Samuel Paty became … the face of the republic, of our will to shatter terrorists, to reduce Islamists, to live like a community of free citizens in our country,” Macron said at a ceremony held at Sorbonne University in Paris, where the French president granted the slain instructor the republic’s highest award, the Légion d’Honneur.

The cartoons that Paty showed his class had been published in Charlie Hebdo, the satirical French magazine. In 2015, a dozen people including members of the editorial staff were killed in an Islamic State-claimed terrorist attack in and around the magazine’s offices in Paris after it published a satirical cartoon of Islam’s founder.

In his statement, Mahathir said the killing was not an act he would approve as a Muslim, but it also pointed out that Macron had violated free speech by insulting others.

“Macron is not showing that he is civilized. He is very primitive in blaming the religion of Islam and Muslims for the killing of the insulting school teacher. It is not in keeping with the teachings of Islam,” he said.

Mahathir’s statement drew support from an unlikely source in Malaysia and rebuke from across the globe.

Former Prime Minister Najib Razak who lost power in 2018 when Mahathir’s coalition pulled off an election upset, called for calm.

“The world shld [should] calm down & read @chedetofficial statement in its full context. I’m sure he didn’t mean exactly what he said. And even if he did, it’s his personal opinion not Malaysia’s,” Najib said in a tweet. “In the meantime, someone should take away all his social media accounts before he does more damage.”

“I strongly disagree with Tun Dr Mahathir’s recent statement. Freedom of expression is a right, calling for violence is not,” she said.

“The German Embassy is dismayed by the language Tun Dr. Mahathir has employed. The order of the day is a de-escalation of words and solidarity with the victims of violence. Germany shares the pain and sorrow of her close partner and friend France,” it said.

NGOs and political figures issued statements in condemnation as well.

The Center for Independent Journalism (CIJ) issued a statement calling for Mahathir to apologize for his remarks and retract the statement.

“A person of Dr. Mahathir’s caliber and public standing, as a former head of state and seasoned leader and politician, carries with him a larger responsibility of being careful with his words and refraining from taking to hate speech and glorifying violence, because of the broader and wider repercussions,” the group’s executive director, Wathshlah G. Naidu, said.

According to a report by the Associated Press, the Facebook office in Malaysia said in an email that it had taken down Mahathir’s posting for violating the social media platform’s policies.

“We do not allow hate speech on Facebook and strongly condemn any support for violence, death or physical harm,” AP quoted the statement as saying.

Meanwhile in Bangladesh, thousands of Muslims turned out for an anti-France protest in Dhaka after Friday prayers to denounce recent statements by President Macron and to call on him to apologize. They also called on their government to end ties with France.

The main protest centered at the Baitul Mukarram National Mosque in Dhaka, where riot police were deployed at intersection to avert any violence.

“It is completely illogical to call for overthrowing the government for the France incident, people who are talking about it don’t have any idea what they are talking about,” he told BenarNews. “We respect all religion, we deny insulting any religion.”

“If we cut off relationships with France, Bangladesh will face huge losses. We import very little from that country, but on the other hand we export billions of dollars’ worth of products there including garments.”

Earlier this week in Kuala Lumpur, the Malaysian government summoned the French deputy ambassador to respond to Macron’s remarks.

“Malaysia is of the view that such elevated tension does not bode well for the peaceful co-existence of all religions,” the Ministry of Foreign Affairs said in a statement.

“During the meeting, the ministry reiterated Malaysia’s position to strongly condemn any inflammatory rhetoric and provocative acts that seek to defame the religion of Islam as the world has recently witnessed in the forms of populist speeches and publication of profane caricatures depicting the Holy Prophet Muhammad (Peace Be Upon Him).”

And on Tuesday in Jakarta, the foreign ministry of Indonesia – the world’s largest Muslim-majority nation – summoned the French ambassador to voice its concerns about Macron’s stand on the satirical cartoons and his defense of freedom of speech.

“We conveyed our condemnation of the French president’s remarks that were insulting to Islam,” spokesman Teuku Faizasyah told BenarNews.

“This is actually a grave error that there is no justification that can be produced in his defense, even if his sole aim is to obtain votes in an election,” he said on Friday.

Sharif Khiam in Dhaka contributed to this report.