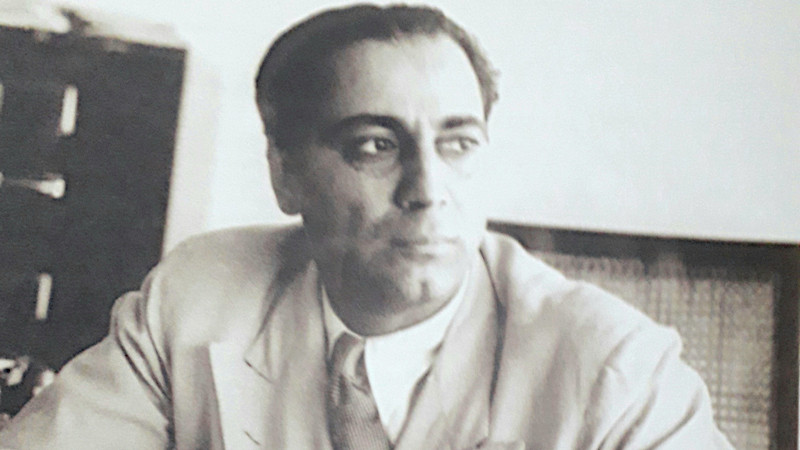 On the 111th birth anniversary of Dr. Homi Bhabha, this writer leafed through some of his letters, messages, office orders and other paraphernalia to find out whether there is any truth in some of his detractors’ allegation that he was a law unto himself!  It is exhilarating to speculate how he ensured that the agency to implement the atomic energy programme in the country will receive authority.  He managed to secure “within the limits of the budget provision approved by the Parliament, the Atomic Energy Commission shall have the powers of the Government of India, both administrative and financial, for carrying out the work of the Department of Atomic Energy.”

On April 26, 1948, Dr Homi Bhabha submitted a report on the Organization of Atomic Research in India to the then Prime Minister Pandit Jawaharlal Nehru… He highlighted the requirement that “the development of atomic energy should be entrusted to a very small and high powered body composed of say three people with executive power and answerable directly to the Prime Minister without any intervening link”. “For brevity, this body may be referred to as the Atomic Energy Commission”, he added.

“The present Board of Research on Atomic Energy cannot be entrusted with this work since it is an advisory body ……….. composed of 28 members including officials, scientists and industrialists. Secret matters cannot be dealt with under these organizations”, he asserted

Besides building an atomic pile and carrying out survey of uranium and thorium, Bhabha wanted the department to set up a heavy water factory to be placed under the Defence Ministry with the same security measures as the armaments factories of that Ministry.

“The heavy water produced should be at the disposal of the Atomic Energy Commission for use or sale”. With a single stroke, he thwarted a turf war with the army later!

Fight for an organizational set up

Bhabha knew that India inherited a rule- bound, precedent- driven bureaucracy. To set up a top class research institution, you need to recruit talented persons; to build   world- class research laboratories, you need the help and support of dedicated architects and civil engineering specialists; to equip these laboratories, you have to make purchases as per your own specifications.

The problem was that you already have gargantuan agencies doing these tasks for the entire central ministries for many years. If Dr Bhabha accepted that situation and went ahead, the progress would have been very slow.

Bureaucracy rose to the occasion and helped Bhabha to set up “an organization with full authority to plan and implement the various measures on sound technical and economic principles and free from all non-essential restrictions or needlessly inelastic rules”.

On February 27, 1960 Bhabha issued an office order, the first paragraph of it, virtually all the senior scientists of my generation knew by heart. “Radioactive materials and sources of radiation should be handled in the Atomic Energy Establishment in a manner which not only ensures that no harm can come to workers in the establishment or anyone else, but also in an exemplary manner so as to set a standard which other organizations in the country may be asked to emulate”. The joke among some of us was that if any one does not remember Bhabha’s exhortation one annual increment may be cut!

The next portions of the letter were less known and were probably the most formal ever written by Bhabha. “It is the duty of each Head of Division to see that the proper procedures and precautions for the handling of radioactive materials and sources of radiation, as prescribed by the Health Physics Division from time to time are followed strictly, and each leader of the group is responsible for seeing that members of the group do likewise.”

“The Head of Health Physics Division, or the health physics teams are authorised to question the occupants of an area on the work done there, the materials used, the procedures followed in using them, and on any other matter which may be pertinent to their task”

Dr Bhabha enforced this order, two years before the Atomic Energy Act 1962 which contains safety provisions, came into force. One of the major reasons may be that the use of radioactive materials was increasing in the Establishment. He may have recalled an extensive radioactive contamination incident which happened at the laboratories at the Tata Institute of Fundamental Research (TIFR).

This is not a State secret. The 1953-1954 Annual report says that “once Division on matters of health physics was set up at TIFR, it was found that several of the Physics Laboratories were contaminated with alpha radioactive substances, and several tables, equipment, switches etc, showed activity above the permitted tolerance levels”, the report goes on saying that rooms were decontaminated and the workers for decontamination work were being specially trained etc.

Harsher for cleanliness and housekeeping

Dr Bhabha was exceptionally harsher when it came to maintenance and cleanliness of various buildings. In an office order issued on October 29, 1963, he wanted the name of one scientific officer from each Division responsible for housekeeping by October 31, 1963.

“It must be emphasized in connection with the final responsibility for the proper use of each building and its cleanliness rests with the Head of the Division concerned and he will be held responsible for any misuse of the building by any member of the Division working under him. Any continued lack of care in the use of a building by any member of the staff should be noted in his confidential report, and will be taken into account in making an overall assessment” he warned.

Dr Bhabha desired that in Atomic Energy circles “Trombay” should be globally known as the Atomic Energy Centre of India the way “Harwell” was for the British Centre and “Saclay” for the French one. He issued a Memorandum on that!

His two page Standing Order on how to prepare one’s own Confidential Report gave minute details.

Dress code for visits of VIPs

His instructions on Dress for visits of VIPs firstly issued when the Queen visited Trombay decreed:  “All those who are to be presented to the Queen will be dressed in bundgulla* or lounge suite”. [* the uniquely Indian tunic coat]

“Those who are not to be presented will be in their normal working clothes. They will ensure that their personal clothes, as well as their overalls, boiler suits etc as the case may be, are clean and tidily worn.” These instructions became standing instructions later.

Visits must be purposeful

“It is important that visitors who come here for talks with us should commence their discussion after acquiring a fair knowledge of what we have achieved so far and what we are planning to do in the near future. For this purpose, it is desirable that such visitors be taken round Trombay and TIFR before anything else is done. This may be followed as a general rule, and deviation made only in exceptional cases.” He insisted in an order.

That Dr.Bhabha was not a law unto himself   was evident when he issued the Standing Order on TROMBAY SCIENTIFIC COMMITTEE (TSC).  TSC has a Chairman, and as Members, all Heads of Groups and Heads of Divisions.

“Each member will have one vote and in case of a difference of opinion, the decisions of the Committee will be taken by a simple majority of votes of those present and voting”, he decreed.

No other scientist or leader in any country may have “bloodlessly” secured such authority and powers from the highest levels of decision makers to set up, build and consolidate such an eminently notable multidisciplinary scientific enterprise. Every year when the officers and staff at the Department of Atomic Energy and its aided Units celebrate the Founder’s day on October 30, the birth anniversary of Homi Bhabha, they examine what they achieved over the preceding year and dedicate themselves to nation building by pledging to complete the remaining projects and programmes in a timely way. That is the time for calm contemplation and annual stock taking