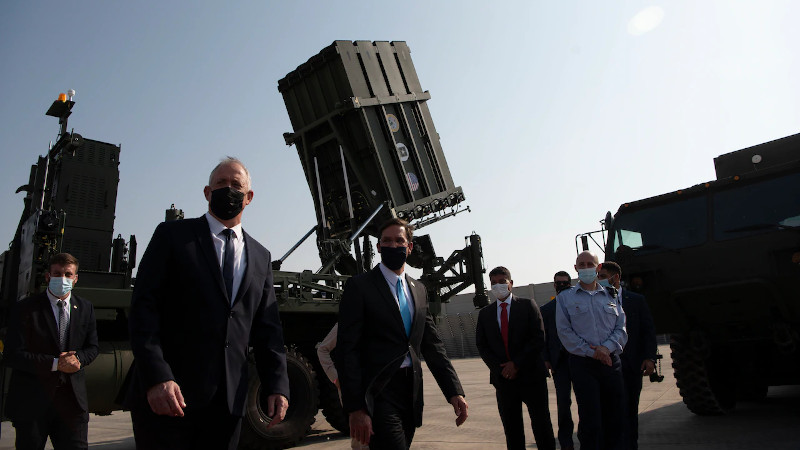 Defense Secretary Dr. Mark T. Esper got a chance to see the Israeli Iron Dome antimissile battery that the U.S. Army is buying during a stop in Tel Aviv earlier this week.

Iron Dome is a combat-proven piece of equipment that the Defense Department has invested in for years. The Israelis have used the system constantly to stop the rain of missiles that struck vulnerable cities in the south and north of the country. The Iron Dome prevented more than 2,500 missiles from striking occupied areas of the country.

Israeli officials are very proud of the missile defense network they have developed that includes David’s Sling and the Arrow system. They are very proud to share the Iron Dome with the United States military.

Israeli Prime Minister Bibi Netanyahu met Esper near the airport and called the sale of the Iron Dome to the U.S. Army “a testament to our alliance. The Iron Dome was developed by Israel with U.S. assistance,” Netanyahu said in answer to a question. “Now we share so many things; the U.S. helps us in so many ways. It’s a privilege for us to have reciprocity in this relationship. [Iron Dome has] protected us. We will be happy if it protects America, too.”

Earlier, Defense Minister Benny Gantz met Esper at the airport and he escorted the secretary to the missile system static display. The system components were already mounted on U.S. Army standard Oshkosh trucks, and painted in Army colors. The battery was finished on time and within budget, Israeli Missile Defense Organization Chief Moshe Patel told Esper.

The Iron Dome is designed to shoot down short-range missiles — those with a range of about 40 miles or less. The Israelis developed the system in response to threats emanating from Gaza and Southern Lebanon. Israeli scientists worked on the solution to the problem set and often consulted with U.S. researchers. They developed and fielded the system quickly. The United States military invested in the project as well.

The system the U.S. Army has bought has been continually improved since its debut, Patel said. Israeli scientists worked the algorithms to increase the accuracy and range of the missiles. They also adapted it so it is compliant with U.S. command and control systems, and by extension, NATO command and control.

Iron Dome can be reloaded quickly and firing batteries can be ganged together. There is an artificial intelligence function that analyzes incoming rounds and determines if people or facilities are in danger. If not, the AI would not recommend a shot. A person is always in the kill loop, however, according to an Israeli Defense Forces officer whose identity is protected.

The battle management system is extremely adaptable and Patel said it could take inputs from many different radars and could be used to tie together different U.S. missile defense systems like the Patriot and THAAD.

The U.S. Army has one battery of Iron Dome missiles. The second will soon be shipped to America. The batteries will undergo tests at Redstone Arsenal in Alabama and White Sands Missile Range in New Mexico.