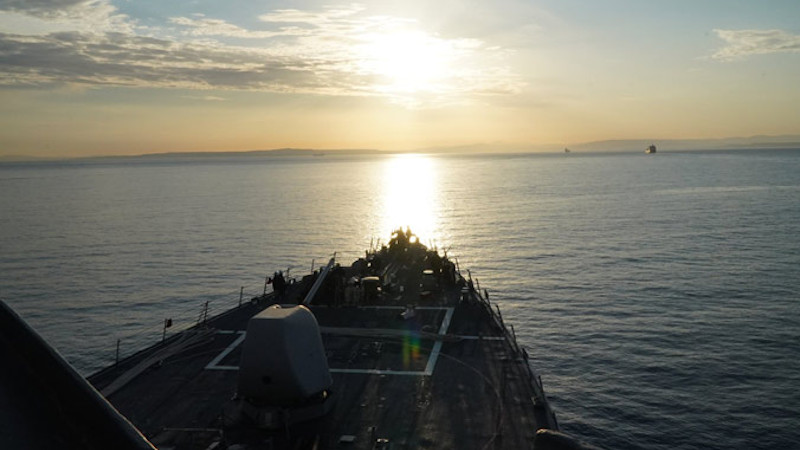 NATO spokesperson Oana Lungescu welcomed the deployment, saying: “The Black Sea is of strategic importance to NATO. Three Allies – Bulgaria, Romania and Turkey – are littoral states, while Georgia and Ukraine are close partners. In response to Russia’s illegal and illegitimate annexation of Crimea from Ukraine and its ongoing military build-up in the Black Sea, the Alliance has increased its defensive presence in the region and remains strongly committed to Black Sea security”.

The US Navy and other NATO navies routinely operate in the Black Sea, consistent with international law, usually patrolling the waters for around two-thirds of the year. In addition, the Spanish Air Force has deployed six fighter aircraft to Romania for NATO air policing duties. During the two-month deployment, the Spanish aircraft are stationed at Kogalniceanu airbase on Romania’s Black Sea coast. The aircraft will fly patrols alongside the Romanian Air Force.

NATO is also strengthening support for Georgia and Ukraine, including with coast guard training and the sharing of information.

The Past and Future of the Jan. 6 Committee
byThe Lawfare Institute

The Jan. 6 select committee has wrapped up its first spree of hearings, and it has announced a second set of hearings when Congress returns in September. The month of lull gives us a good opportunity to assess where the committee has come so far and where it might be going.

Benjamin Wittes sat down in Twitter Spaces on Thursday with Lawfare’s executive editor and host ofThe Aftermath Natalie Orpett, Lawfare senior editors Quinta Jurecic and Molly Reynolds, and Lawfare managing editor Tyler McBrien, who read questions from the live audience. They discussed what the committee has accomplished institutionally, what it has accomplished from an adding-new-evidence point of view, what the purpose of this next round of hearings might be, and what relationship this investigation might have to the Justice Department’s recent spree of activities.